Aerial photo shows the celebration of Taijiquan inscribed on the Representative List of the Intangible Cultural Heritage of Humanity in Chenjiagou Village, Wenxian County, Jiaozuo City of central China's Henan Province on December 17, 2020.

Taijiquan, a kind of traditional martial arts, was born in the mid-17th century in a small village named Chenjiagou, located in Central China's Henan province, before it spread to more than 150 countries and regions, attracting more than 100 million practitioners. 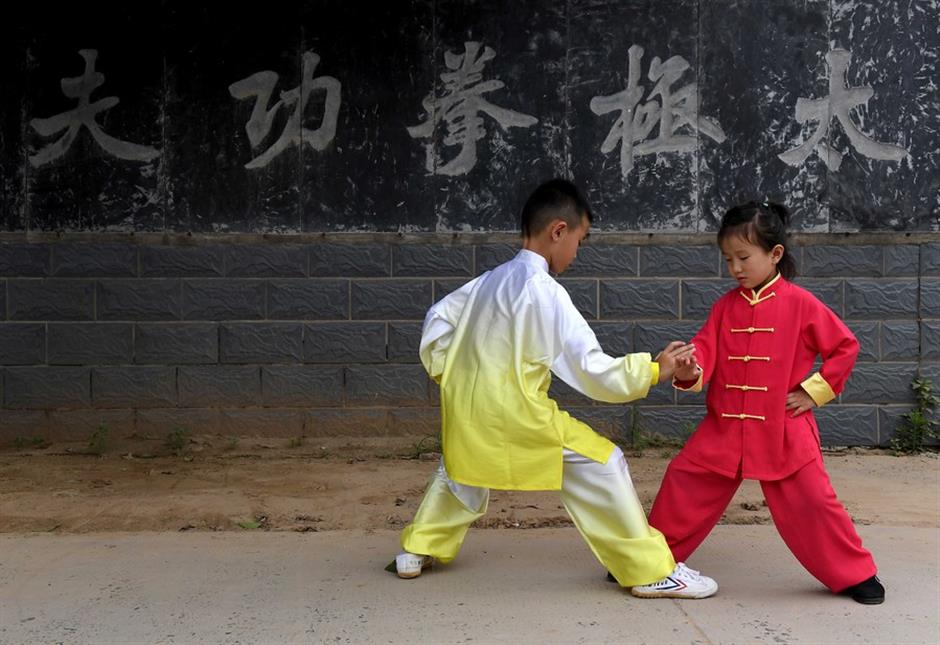 From a little village to Beijing

It took almost 200 years for Taijiquan, from being created in a little village, to spread to Beijing, the capital city of China, and then spread over the country.

Chen Bu, the first generation of the Chen family in Chenjiagou, moved from Shanxi province to this village located on the northern bank of the Yellow River during the Ming Dynasty Hongwu years (AD 1368-1398), where he taught martial arts to villagers to protect the village.

About 300 years later, Chen Wangting, the ninth generation of the Chen family in Chenjiagou, created a new kind of martial arts named Taijiquan, which was a style that seemed slow, but featured a lot of power.

Following the traditional rules, Taijiquan was only taught to men in the Chen family until Yang Luchan, 10 years old at that time, came from Hebei province to Chenjiagou to learn it secretly in 1809.

"Master Chen Changxing discovered but didn't drive him away as he thought this young man was both talented and upright," said Yan Shuangjun, a researcher of Taijiquan.

Yang returned to his hometown of Hebei province's Handan city to teach Taijiquan about 30 years later and then moved to Beijing to teach it to rich and royal relatives' families.

"No one was able to beat Yang in Beijing, which made him very famous there, so more and more people followed Yang to learn Taijiquan," Yan said. "Then these followers called Yang's martial arts Yang Taijiquan."

Taijiquan has now been developed and adapted to many different styles named after a master's family name, such as Wu Taijiquan, Sun Taijiquan, and so on.

Chenjiagou became a shrine for all Taijiquan lovers, attracting people from all over the world to make a kind of pilgrimage there. 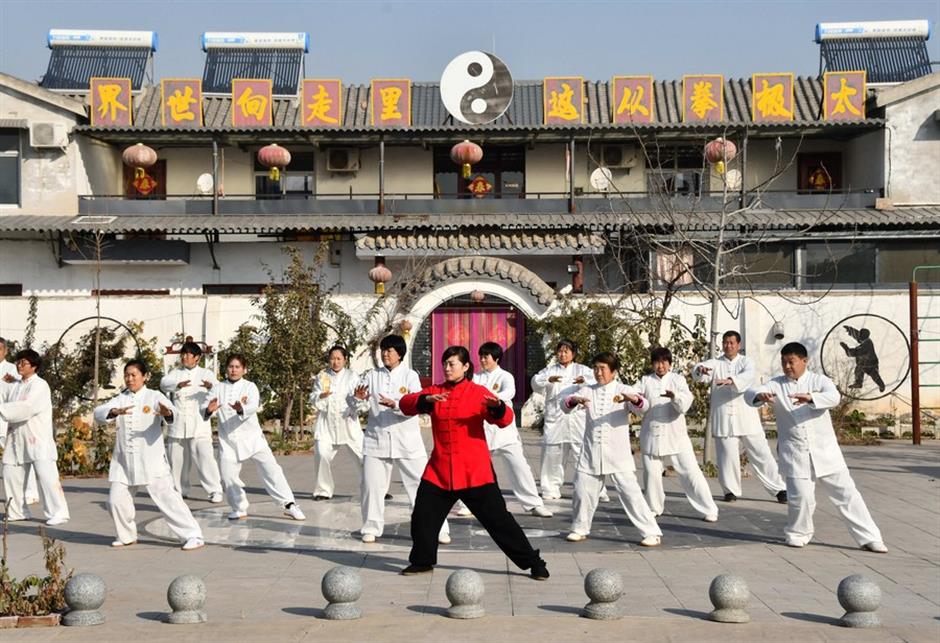 From China to world

French doctor Matthieu Tachon fell in love with Taijiquan after his first visit to Chenjiagou to see a master's show in 2005 with his Chinese girlfriend, who was born in Henan's capital Zhengzhou. He returned the following year to spend two months learning the craft.

Between 2006 and 2010, Tachon made an effort to take at least one or two months each year out of his busy schedule to practice Taijiquan in Chenjiagou. By 2010, he opened up his own Taijiquan academy and invited masters to co-teach the students in France.

"This academy now consists of 30 regular students. I teach them twice a week, and other times of the week they practice on their own," Tachon said.

Tachon is one of the millions of foreigners who love Taijiquan, which has spread to many countries and regions since the adoption of Reform and Opening-up policy in China in late 1970s. 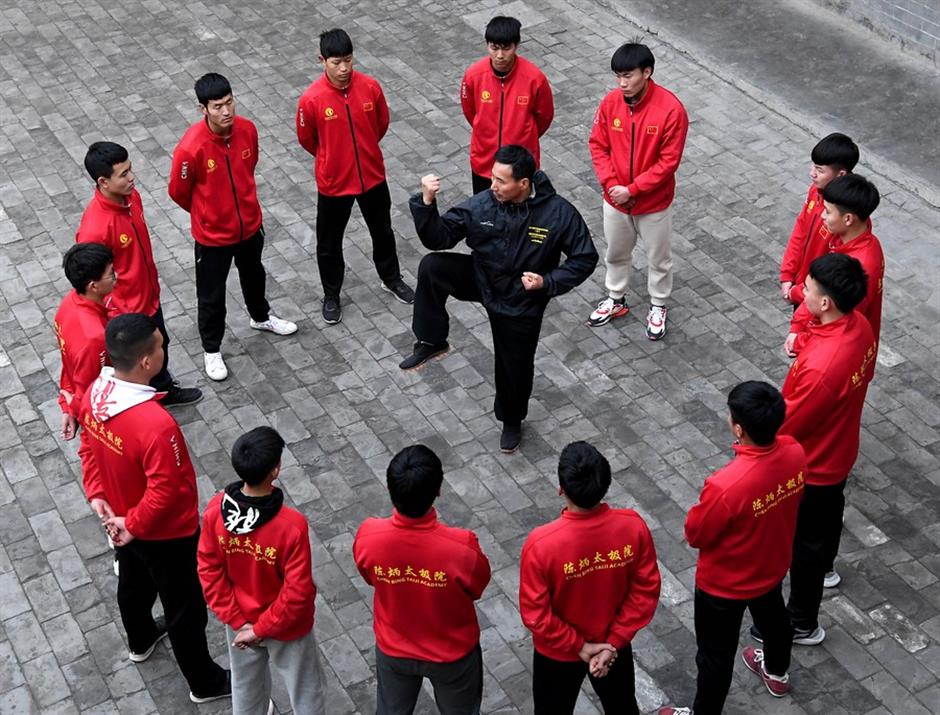 Residents of Chenjiagou have been working to promote Taijiquan internationally since the 1980s.

71-year-old Chen Zhenglei, Chenjiagou's Taijiquan master, went to Japan to teach Taijiquan in 1983, and he has visited more than 60 countries and regions and opened more than 100 teaching centers all over the world.

"While we teach Taijiquan around the world, many students not only fall in love with Taijiquan, but they also come to like Chinese Calligraphy and philosophy," Chen Zhenglei said.

"If you want to practice Taijiquan well, you must learn Chinese culture," Tachon agrees with Chen Zhenglei, and he has read "The book of Tao and Teh" written by Laozi, a philosopher from the Spring and Autumn Period (BC 770-221). 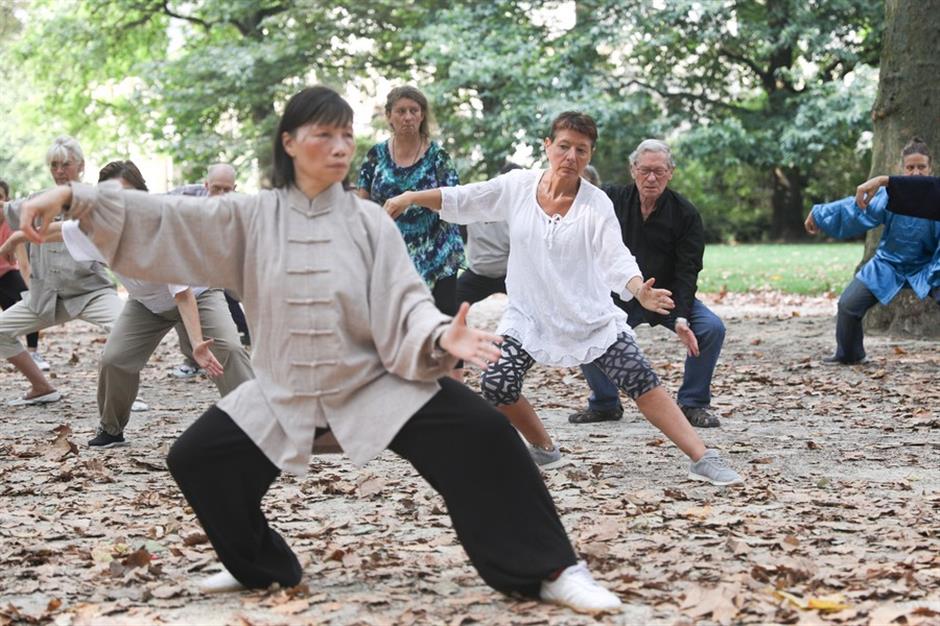 People practice Taijiquan at the Cinquantenaire Park in Brussels, Belgium on August 21, 2018.

Protection and inheritance of Taijiquan

"The best protection is to teach more people to practice it," Yan said.

Chenjiagou now has dozens of Taijiquan schools and more than 800 current masters, drawing learners from all over the world.

Henan's Jiaozuo city, where Chenjiagou is located, has held 10 sessions of international Taijiquan tournaments since 1992, attracting tens of thousands of players to take part in.

Since 2014, the World Taijiquan Championships have been held every two years by the International Wushu Federation. It provides a platform for communication and learning between the Taijiquan elites and lovers around the globe. In January 2020, Taijiquan became an official event at the 2026 Dakar Youth Olympic Games.

"Taijiquan is a sport for everyone, both the young and the old, while it also contains Chinese philosophy that can make people peaceful, so I believe there will be more and more people in love with it," Yan stressed.

"Now Taijiquan is listed as an Intangible Cultural Heritage of Humanity, which will help it to spread," Yan added. 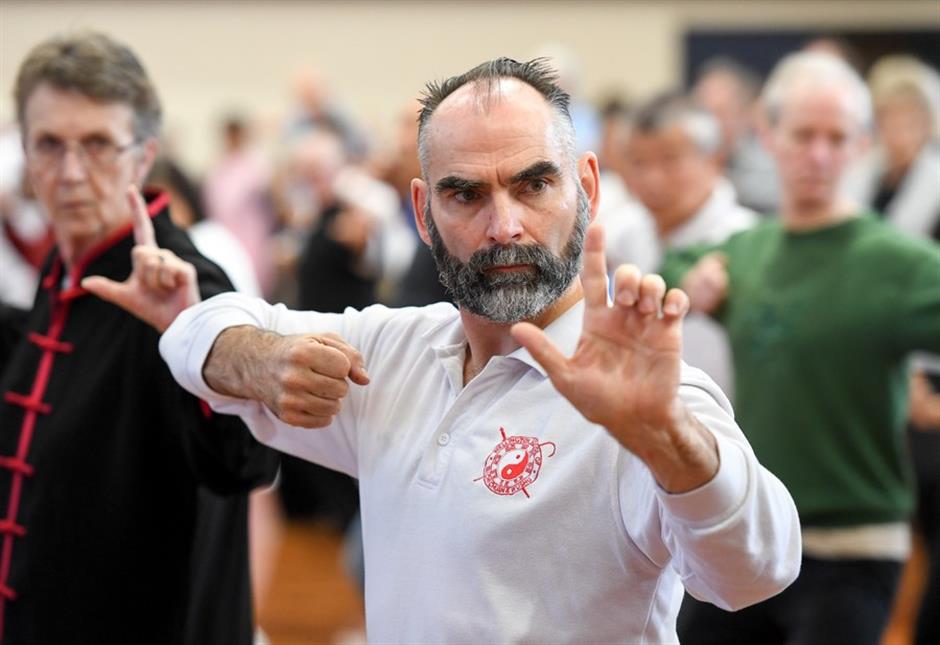 Taijiquan has entered schools, factories, communities, and villages in China, and there are many Taijiquan lovers practicing in parks, squares, even on the side of the road.

"Besides, we are collecting historical documents of Taijiquan to build a database for scholars and lovers to research and spread Taijiquan culture," Yan said.

"Despite there being many different styles of Taijiquan, we all stick together to protect and spread it, learning from each other and promoting exchanges and cooperation," said Tan Xingmin, president of Wang Qihe Taijiquan association in Hebei province.