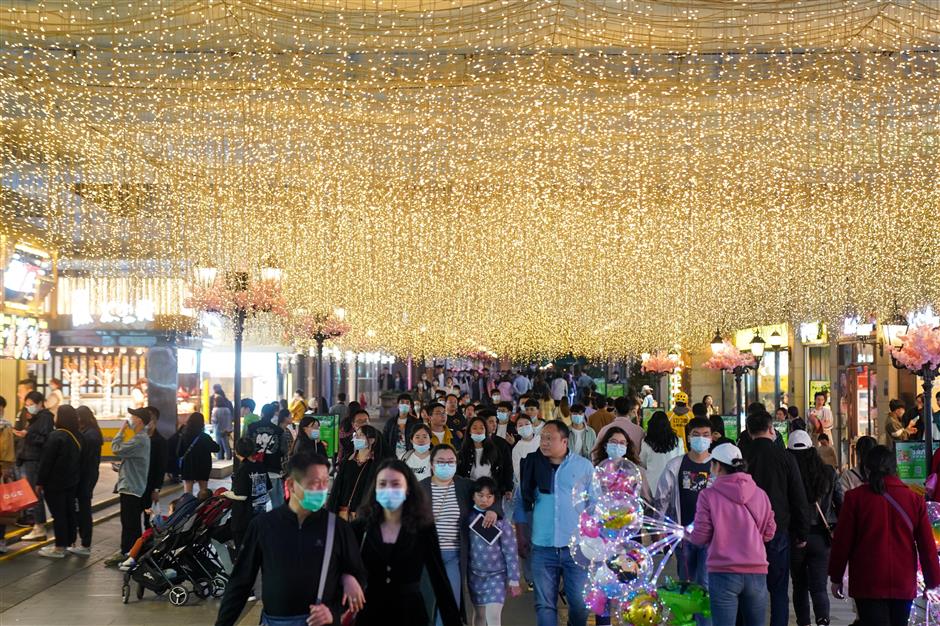 In Wuhan's Hongshan Gymnasium, Pei Haodong took off his mask to play badminton, unfazed by the fact that the place was once the city's main COVID-19 battleground.

The gym was converted into a temporary hospital during the coronavirus outbreak in early 2020. It helped overloaded hospitals to treat 1,124 COVID-19 patients before ceasing operations on March 10 as infections waned.

A year has passed since Wuhan, capital of Hubei Province and the hardest-hit Chinese city by the virus, emerged from the citywide lockdown, and vitality has returned to the gym. During the Qingming holiday from April 3 to 5, it was fully booked by sports enthusiasts like Pei.

"I could imagine the depressing scenes here a year ago: the badminton and basketball halls filled with hospital beds, and patients and medical staff in hazmat suits," the 62-year-old retiree said.

"But now I'm not worried playing badminton here without a mask," Pei said, pointing to the omnipresent hand sanitizers in the gym and its strict entry requirements like temperature checks and visitor number caps.

After two months of cabin fever, Pei, whose family members were not infected, quickly resumed his sporty lifestyle as he did before the epidemic.

But for many others in the city that lost 3,869 lives to the virus, the psychological recovery has not been easy.

Li Ling, a washing machine salesperson in Wuhan, was once admitted to the ICU for her severe COVID-19 symptoms. After being saved by medical teams, Li learned to appreciate her hard-earned "second life."

"(After recovery), I no longer fret about trivial and unimportant things. I cherish my loved ones and do things I enjoy," said the 48-year-old Wuhan resident.

However, discrimination against COVID-19 patients, even after they had totally recovered from the disease, used to weigh down Li. Her colleagues refused to work near her, and her employer proposed she take a long leave.

"The life-and-death experience taught me to let go of many things, but I still felt sad when people isolated me or discriminated against me," she said.

In March, Li felt relieved to be assigned to another emporium where she works alone at a washing machine booth. She also expects the ongoing vaccination drive to speed up the attitude change, so "things can move on, and others can accept former COVID-19 patients like me."

Yin Rui (pseudonym) found herself in similar isolation after losing her mother to the virus. For a long time since Wuhan reopened in April last year, the 24-year-old student dared not venture out of her house.

"Traffic jams, crowded shopping malls, and happy-looking pedestrians were back. They reminded me of how happy my life once was before the outbreak," said Yin. "I lacked the courage to face the post-epidemic world."

Her family and boyfriend eventually persuaded Yin out of her self-isolation. On March 23, her mother's birthday, she visited the cemetery to spend some time with her mother.

"It is a sadness of a lifetime, but I must move on and live a worthy life so that my mother can rest in peace," she said.

The COVID-19 epidemic had a complex impact on society and the public mental health, said Ren Zhihong, a psychologist at the Wuhan-based Central China Normal University.

Apart from those traumatized by illness and loss of lives, there were college graduates who faced mounting pressures as the epidemic battered companies and raised uncertainties in the job market, he added.

Government interventions, meanwhile, proved timely in cushioning the impact of the disease on mental health, said Ren, who in late January joined a 4,000-member team set up by the Ministry of Education to offer psychological counseling during the epidemic.

Besides, Hubei Province's educational authorities called for a psychological intervention team in the same month. A total of 266 psychologists joined the initiative to offer around-the-clock counseling via hotlines and social media platforms.

"When the epidemic was at its worst, we answered more than 300 calls a day," said Lai Haixiong, a psychology professor at Wuhan University. "They came from all walks of life: mothers, students, community workers, and medics, who feared infections of themselves or their family members."

Lai said their counseling had returned to more mundane issues after the epidemic ebbed away. "Now parents worry more about their children's studies, and university students are preoccupied with future employment," he said.

Ren agreed that Wuhan has recovered from the "psychological lockdown" but called for continued attention to the public feelings of uncertainty, PSTD haunting front-line medics, and discrimination against former COVID-19 patients.