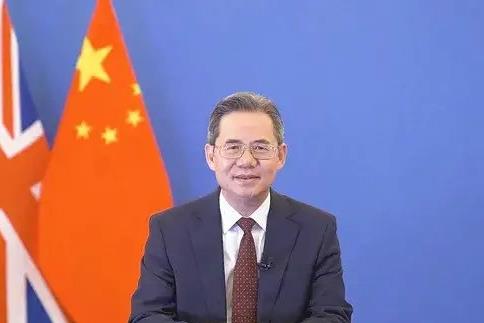 Chinese Ambassador to Britain Zheng Zeguang on Monday called for sound and steady development of China-Britain relations, so as to benefit the peoples of the two countries and beyond.

In an online video remarks released on Monday after his arrival in London, Zheng said that it is essential that China and Britain respect each other's core interests and major concerns.

He noted that both sides should deepen cooperation in trade, finance, innovation, people-to-people exchanges and other fields, and step up coordination on global issues such as fighting against COVID-19, spurring global recovery and tackling climate change.

Both sides also need to address their differences properly and contribute to world peace and common development, he added.

In a welcoming message on the website of the Chinese embassy in Britain, Zheng said that Chinese and British peoples have a long history of extensive interactions.

Both countries are permanent members of the United Nations Security Council, which have significant global influence, he said.

China stands ready to work with Britain to enhance their exchanges, expand cooperation and handle differences in "an appropriate manner under the principles of mutual respect, equality, inclusiveness and mutual learning," he said.

A sound China-Britain relationship is not only in the fundamental interests of both countries and peoples, but also conducive to world peace, stability and development, said Zheng.

China, he said, will continue to hold high the banner of peace, development and win-win cooperation, expand friendly cooperation with all countries on the basis of the Five Principles of Peaceful Coexistence, and promote the building of a new type of international relations and a community with a shared future for mankind.

A veteran diplomat with rich experience born in 1963, Zheng studied in Cardiff University from 1986 to 1987.

He recalled that as a student in Britain 35 years ago, he saw there were only several hundreds Chinese students here, while this figure has exceeded 200,000, which is yet another proof of the keen interest of the two peoples for closer exchanges and cooperation.

China and Britain, he observed, should make greater efforts to pave the way for more interactions, build stronger bridges of cooperation and lay a more solid foundation of friendship between the two peoples.