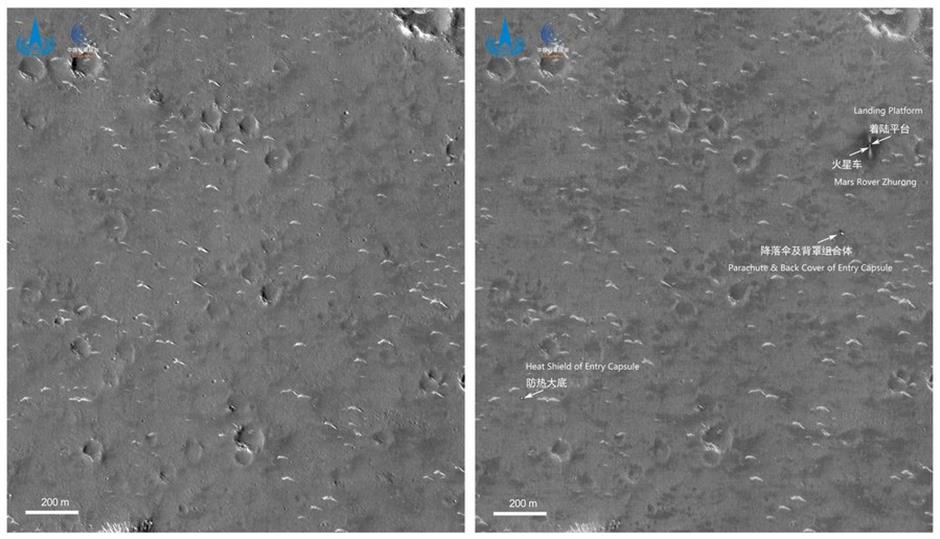 The China National Space Administration on Monday released a new Mars image taken by the Tianwen-1 probe. In this combo photo, the left part is the Martian surface before the lander carrying the rover touched down on the red planet on May 15; and the right part shows the country's first Mars rover and its landing platform on the Martian surface.

In the image, taken by a high-resolution camera installed on the orbiter of Tianwen-1 at 6 pm on June 2 (Beijing Time), two bright spots are visible in the upper right corner. The larger one is the landing platform, and the smaller one is the Zhurong Mars rover, the CNSA said.

China's Tianwen-1 mission, consisting of an orbiter, a lander, and a rover, was launched on July 23, 2020. The lander carrying the rover touched down in the southern part of Utopia Planitia, a vast plain in the northern hemisphere of Mars, on May 15.

The rover Zhurong drove down from its landing platform to the Martian surface on May 22, starting its exploration of the red planet, and making China the second country after the United States to land and operate a rover on Mars.

As of June 6, the rover Zhurong has been working on the surface of Mars for 23 Martian days to detect the environment, move around the surface, and carry out scientific exploration. A Martian day is approximately 40 minutes longer than a day on Earth.

All scientific equipment aboard the rover is turned on to collect data. The orbiter operates in a relay orbit with a cycle of 8.2 hours, providing relay communication for the scientific exploration of the Mars rover.

The rover Zhurong is named after the god of fire in ancient Chinese mythology. The name echoes with the Chinese name for the red planet, Huoxing (the fire planet), while the name of the mission, Tianwen, means Questions to Heaven. It is the title of a poem by the ancient Chinese poet Qu Yuan (circa 340-278 BC).

With an expected lifespan of at least 90 Martian days (about three months on Earth), Zhurong will record the Martian landscape with high-resolution three-dimensional images and analyze the material composition of the planet's surface. It will also detect its sub-surface structure and magnetic field, search for traces of ice and observe the surrounding meteorological environment.

The orbiter, with a design life of one Martian year (about 687 days on Earth), will relay communications for the rover while conducting its own scientific detection operations.