A screenshot from a news program by CCTV shows a student taking the exam at Guangzhou No. 8 People's Hospital in Guangzhou, Guangdong Province, on June 7.

Teenage COVID-19 patients in southern China bent over test papers and scribbled answers alone in hospital rooms, taking the college entrance exam, or gaokao, despite being in virus-induced isolation.

Guangdong Province has reported dozens of COVID-19 cases in recent days, prompting authorities to impose travel curbs and mass testing just ahead of the exams.

The gaokao – which began on Monday and ends on Wednesday – is a crucial part of a Chinese student's life, with results determining admission into universities and shaping career prospects.

The local government has dispatched hundreds of taxis and buses to ferry students from neighborhoods affected by the outbreak to exam venues, with state broadcaster China Central Television showing footage of drivers in protective suits spraying down their cars.

Students were split into different rooms based on their level of COVID-19 risk, with contacts of confirmed cases taking the tests in smaller groups.

Infected students with mild symptoms had to take the tough exams solo in brightly lit isolation rooms in the hospital or special locations.

CCTV footage showed one student sitting at a lone desk and scratching his head as he read the exam paper, a bottle of hand sanitizer on the desk and officials monitoring him on a TV screen.

Other footage showed masked examiners in protective clothing removing completed exam papers from infected students and hanging them up on a clothes-drying rack to be sprayed down with disinfectant.

Last year's gaokao was delayed due to the coronavirus. 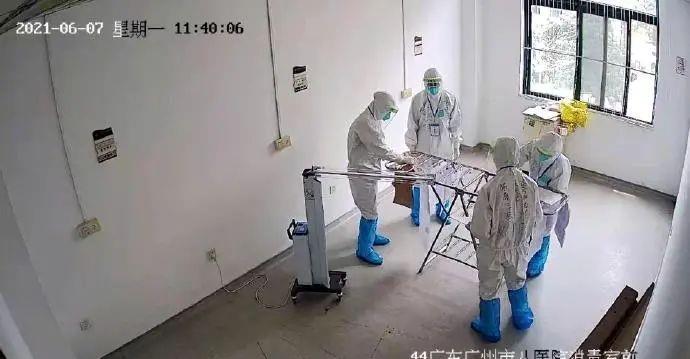 Masked examiners in protective clothing hang exam papers up on a clothes-drying rack to be sprayed down with disinfectant.