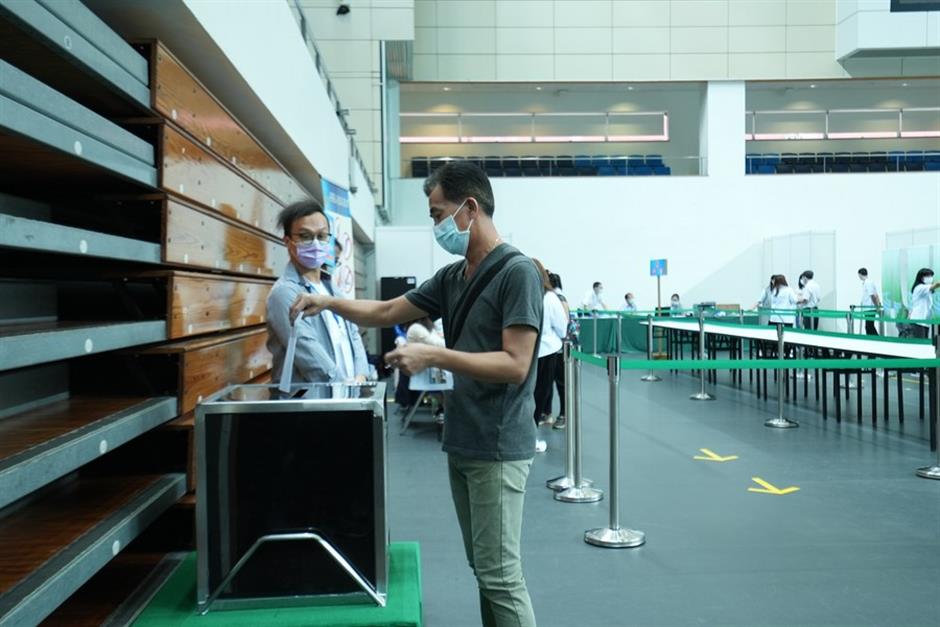 A man casts a vote at Macau Polytechnic Institute polling station on September 12, 2021.

The Hong Kong and Macau Affairs Office of the State Council on Monday congratulated the Macau Special Administrative Region (SAR) on the smooth election of the seventh Legislative Assembly on Sunday.

Macau residents have actively participated in the election in an orderly manner and exercised their right to vote in accordance with the law, which fully demonstrates the successful practice of "one country, two systems" with Macau characteristics, the spokesperson said.

The election was conducted strictly according to laws, including the Macau SAR Basic Law and the Legislative Assembly Election Law, said the spokesperson, adding that the result demonstrates the principle of "patriots administering Macau," democracy and broad participation of people from all strata and all sectors of the Macau society.

The election process was fair, impartial, open, clean, and in good order, the spokesperson added.

Noting that the central government is quite concerned about the long-term stability and welfare of the Macau people, the spokesperson said Macau SAR is embracing major new development opportunities under the general plan of the Guangdong-Macau in-depth cooperation zone in Hengqin.

As the legislative body of Macau SAR, the Legislative Assembly has a great role to play in fully and faithfully implementing the "one country, two systems" policy and promoting a moderately diversified economy in the Macau SAR, the spokesperson said.

It also plays a role in resolving problems concerning people's livelihood and deepening cooperation between the Chinese mainland and Macau in various fields, the spokesperson added.

"We hope the elected members of the Macau SAR Legislative Assembly could live up to the trust of Macau residents, earnestly perform their duties and actively support the Macau SAR government to exercise law-based governance," said the spokesperson.

They should also improve their ability and level of governance, work with all sectors of the Macau society to make new achievements, and contribute to the successful implementation of "one country, two systems" with Macau characteristics and the realization of the great rejuvenation of the Chinese nation, according to the spokesperson.