New local COVID-19 infections more than doubled in China's southeastern province of Fujian, health authorities said on Tuesday, prompting officials to quickly roll out measures including mass testing to halt the spread of the virus.

The National Health Commission said 59 new locally transmitted cases were reported for September 13, up from 22 infections a day earlier. All of them were in Fujian Province.

In an update later on Tuesday, local authorities said that as of 8am, the province has reported 120 locally transmitted confirmed cases and 19 local asymptomatic carriers in the latest outbreak that began on Friday.

The confirmed cases occurred in three cities, with Putian, where the first infections were found, reporting 75 cases. Xiamen, a tourist and transport hub with a population of 5 million, has 33 cases, while Quanzhou reported 12.

All the infected patients have been transferred to designated hospitals for treatment.

As of Monday, two areas in the province have been classified as COVID-19 high-risk areas and four more as medium-risk areas.

The resurgence comes ahead of the weeklong National Day holiday starting on October 1, a major tourist season. The last domestic outbreak in late July to August disrupted travel, hitting the tourism, hospitality and transportation sectors.

China's air passenger traffic plunged 51.5 percent in August from a year earlier, data showed on Tuesday, highlighting the vulnerability of airlines to repeated outbreaks even though COVID-19 is largely under control in the country.

Putian, a city of 3.2 million, ordered testing of all residents on Tuesday after Delta variant cases reportedly linked to a returnee from Singapore ballooned into a province-wide outbreak.

"The Putian government is a big client of ours," said a staff member at a Xiamen building survey firm, declining to be named. "About half of our company went to Putian last week. They are now isolated at home, while the rest have gone to do their COVID tests." 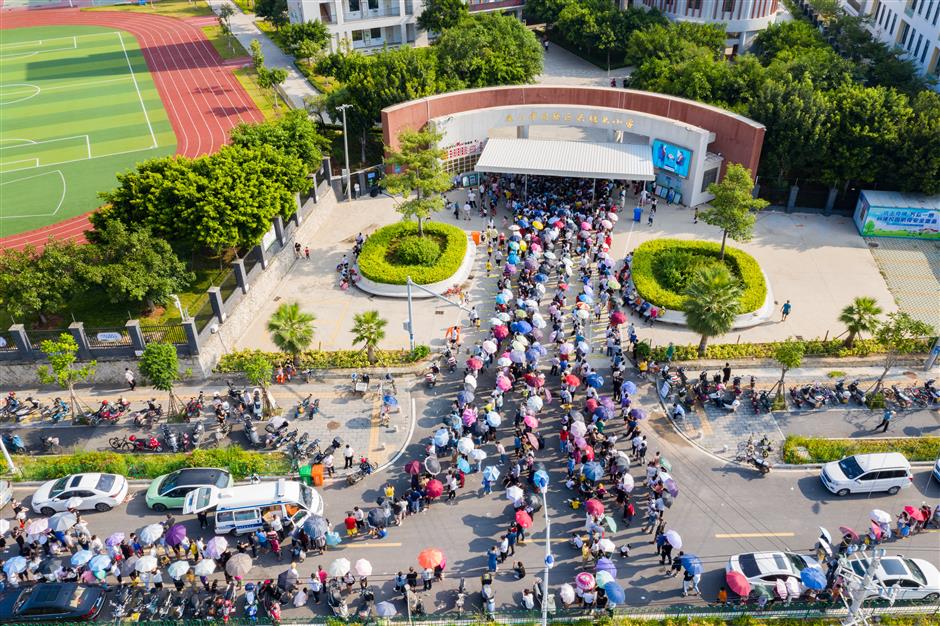 Xiamen residents line up for coronavirus testing at the entrance of a primary school on Tuesday. The city of 5 million people has started mass testing to curb a COVID-19 resurgence.

Xiamen also began city-wide testing, locked down areas of higher virus risk, closed public venues such as cinemas, gyms and bars, and told residents not to leave the city for non-essential reasons.

The first patient in the Xiamen cluster was a close contact of a case in Putian.

Known for its mild weather and a laid-back lifestyle, Xiamen is a popular tourist destination domestically.

The Xiamen Gaoqi International Airport is also a key transportation hub linking the Yangtze and Pearl River Delta. About 60 percent of flights to and from Xiamen were canceled on Tuesday, according to aviation data provider Variflight.

Long-distance passenger bus service from Xiamen to other areas has been suspended.

Authorities said the cluster's suspected patient zero was a man who had recently returned from Singapore and developed symptoms after completing a 14-day quarantine and initially testing negative for the virus.

The man's 12-year-old son and a classmate were among the first patients detected in the cluster last week, shortly after the new school term began. The variant then raced through classrooms, infecting more than 36 children including 8 kindergartners, authorities said on Tuesday, in the first major school-linked spread the country has seen since the start of the pandemic.

China has administered more than 2 billion doses of its coronavirus vaccines, enough to fully vaccinate around 70 percent of its population. But most young children remain unvaccinated.

The Putian government had ordered schools to stop in-person classes while Xiamen followed suit on Tuesday.

The Chinese embassy in Singapore warned its citizens to be "cautious" about traveling to the Southeast Asian country and "be psychologically and economically prepared" for difficulties re-entering China.