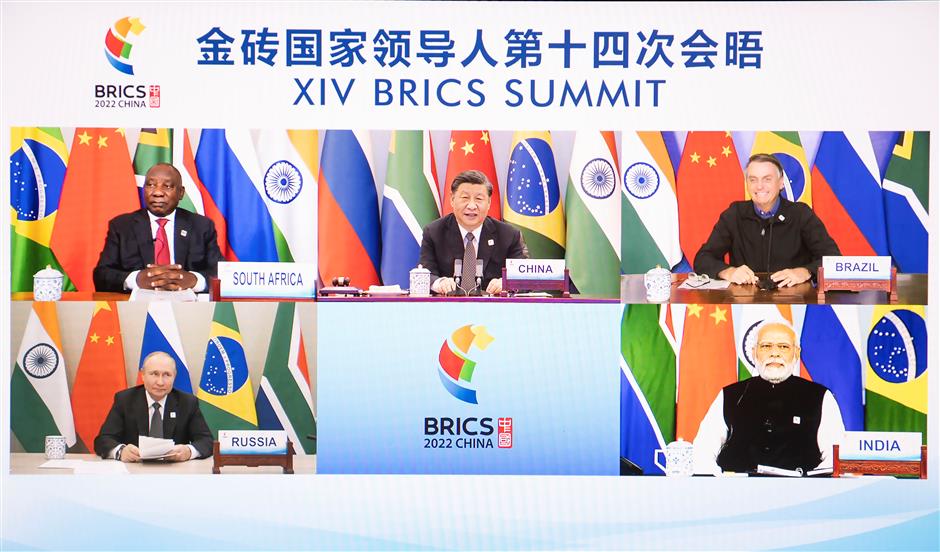 President Xi made welcoming remarks first. He noted that over the past year, despite formidable and complex circumstances, BRICS countries have embraced the BRICS spirit of openness, inclusiveness and win-win cooperation, enhanced solidarity and coordination and jointly addressed difficulties.

He said the BRICS mechanism has demonstrated resilience and vitality. BRICS cooperation has achieved sound progress and results. This Summit is held at a critical juncture in the shaping of the future course of humanity. BRICS countries, as important emerging markets and major developing countries, need to act with a sense of responsibility, speak out for equity and justice, remain firm in the conviction that the pandemic will be defeated, pool strength for economic recovery, advocate sustainable development, jointly contribute wisdom and ideas to the high-quality development of BRICS cooperation and bring positive, stabilizing and constructive strength to the world.

Xi pointed out that our world today is living through accelerating changes unseen in a century and continued spread of the COVID-19 pandemic. They confront humanity with unprecedented challenges. Over the past 16 years, the giant ship of BRICS has sailed forward tenaciously against raging torrents and storms. Riding the wind and cleaving the waves, it has embarked on a righteous course of mutual support and win-win cooperation. Standing at the crossroads of history, we should both look back at the journey we have traveled and keep in mind why we established BRICS in the first place, and look forward to a shared future of a more comprehensive, close, practical and inclusive high-quality partnership so as to jointly embark on a new journey of BRICS cooperation.

First, we need to uphold solidarity and safeguard world peace and tranquility. Some countries attempt to expand military alliances to seek absolute security, stoke bloc-based confrontation by coercing other countries into picking sides, and pursue unilateral dominance at the expense of others' rights and interests. If such dangerous trends are allowed to continue, the world will witness even more turbulence and insecurity. It is important that BRICS countries support each other on issues concerning core interests, practice true multilateralism, safeguard justice, fairness and solidarity and reject hegemony, bullying and division. China would like to work with BRICS partners to operationalize the Global Security Initiative (GSI), advocate a vision of common, comprehensive, cooperative and sustainable security, create a new path to security that features dialogue over confrontation, partnership over alliance and win-win over zero-sum, and bring more stability and positive energy to the world.

Second, we need to uphold cooperation to boost development and jointly tackle risks and challenges. The combination of the COVID-19 pandemic and the Ukraine crisis has cast shadows over development worldwide, and emerging markets and developing countries bear the brunt. But just as a crisis may bring chaos, it can also spur change. A lot will ride on how we handle the crisis. BRICS countries should boost connectivity of industrial and supply chains and jointly meet challenges in poverty reduction, agriculture, energy, logistics and other fields. We should support greater development of the New Development Bank and improve the Contingent Reserve Arrangement to cement the BRICS financial safety net and firewall. We should also expand BRICS cooperation on cross-border payment and credit rating to facilitate trade, investment and financing among our countries. China stands ready to work with BRICS partners to add more substance to the Global Development Initiative (GDI), re-energize the implementation of the UN's 2030 Agenda for Sustainable Development, build a global community of development, and contribute to stronger, greener and healthier global development.

Third, we need to uphold the pioneering spirit and innovation and unleash the potential and vitality of cooperation. Those who seek to create monopoly, blockade and barriers in science and technology in order to disrupt other countries' innovation and development and hold on to their dominant position are doomed to fail. We need to improve global science and technology governance and allow more people to access and benefit from the fruits of scientific and technological advances. We have accelerated the building of the BRICS Partnership on New Industrial Revolution Innovation Center, reached the Digital Economy Partnership Framework, and issued the Initiative for Cooperation on Digitalization of Manufacturing. All these have opened new channels for closer industrial policy coordination between BRICS countries. Recognizing the importance of talents in the digital age, we have set up the Alliance for Vocational Education to build a talent pool for stronger BRICS cooperation on innovation and entrepreneurship.

Fourth, we need to uphold openness and inclusiveness and pool collective wisdom and strength. BRICS countries gather not in a closed club or an exclusive circle, but a big family of mutual support and a partnership for win-win cooperation. Over the past five years, we have organized a variety of "BRICS Plus" events in such areas as vaccine research and development, scientific and technological innovation, people-to-people exchanges and sustainable development. All these provide new platforms for cooperation among emerging markets and developing countries, and set a prime example of South-South cooperation and seeking strength through unity among emerging markets and developing countries. Under the new circumstances, it is all the more important for BRICS countries to pursue development with open doors and boost cooperation with open arms. It is important to advance the process of BRICS membership expansion to allow like-minded partners to become part of the BRICS family at an early date. This will inject new vitality into BRICS cooperation and increase the representativeness and influence of BRICS.

He stressed that as representatives of emerging markets and developing countries, we must make the right decision and take responsible actions at this critical juncture of history. What we do will have a significant impact on the world. Let us stay united, pool strength and forge ahead to build a community with a shared future for mankind and jointly create a bright future for humanity.

The leaders attending the summit thanked China for hosting this event and the efforts it made for promoting BRICS cooperation. They believed that facing international uncertainties, BRICS countries should strengthen solidarity, carry forward the BRICS spirit, consolidate strategic partnership and jointly respond to various challenges so that BRICS cooperation can reach a new level and play a bigger role in international affairs.

Under the theme of "Foster High-quality BRICS Partnership, Usher in a New Era for Global Development", leaders of the five countries held in-depth exchange of views on BRICS cooperation in various sectors and major issues of common concern and reached important consensus. They agreed on the need to stay committed to multilateralism, work for greater democracy in global governance, safeguard fairness and justice, and inject stability and positive energy into the turbulent international landscape.

They agreed on the need to jointly respond to COVID-19, give full play to such mechanisms as the BRICS Vaccine R&D Center, promote fair and equitable distribution of vaccines, and enhance preparedness in the face of public health crises.

They agreed on the need to promote shared global development, give priority to addressing the most pressing needs of developing countries, eradicate poverty and hunger, address the challenge posed by climate change together, expand the application of such technologies as aerospace and big data in the field of development, accelerate the implementation of the UN's 2030 Agenda for Sustainable Development, and make BRICS contribution to jointly ushering in a new era of global development.

They agreed on the need to strengthen people-to-people and cultural exchange and mutual learning and forge more signature projects in various sectors including think tanks, political parties, media and sports.

They also agreed on the need to pursue "BRICS Plus" cooperation at more levels, in broader areas and within a greater scope, actively advance the BRICS membership expansion process, keep BRICS abreast of the times, increase its appeal and relevance, and constantly strive for substantive, solid and sustained progress.

The XIV BRICS Summit Beijing Declaration was adopted and released at the event.

The BRICS leaders were also briefed by representatives of relevant BRICS cooperation mechanisms on their work.

Ding Xuexiang, Wang Yi and He Lifeng, among others, attended the Summit.