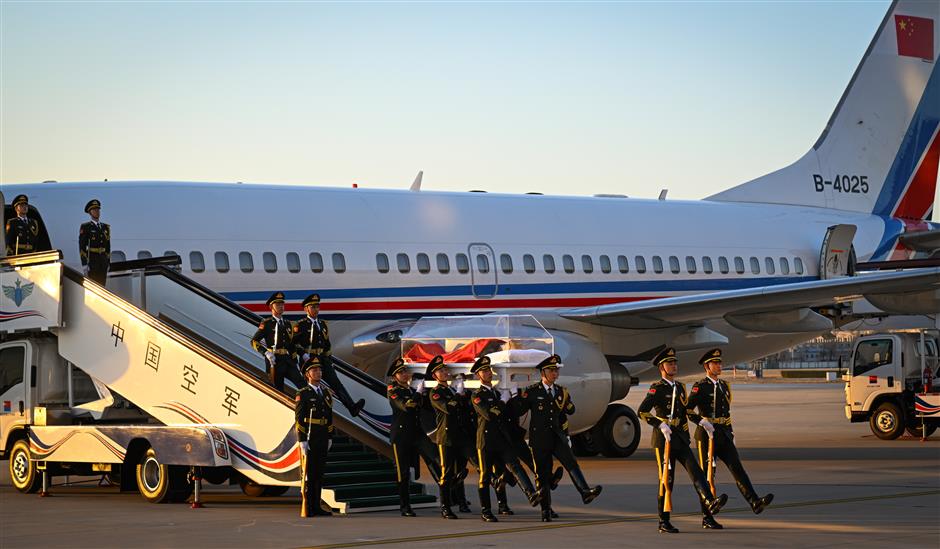 The remains of Comrade Jiang Zemin were transferred to Beijing from Shanghai.

The remains of Comrade Jiang Zemin were transferred to Beijing from Shanghai aboard a special flight on Thursday afternoon.

Cai Qi, some staff members of the office of Comrade Jiang Zemin's Funeral Committee, and Jiang's relatives escorted his remains from Shanghai to Beijing.

The national flag flew at half mast at the Xijiao Airport. Adding to the solemn atmosphere were black banners with white characters that read "Eternal glory to Comrade Jiang Zemin!" and "Comrade Jiang Zemin always lives in our hearts."

Xi, his wife Peng Liyuan, and others, wearing black armbands and with white flowers pinned to their chests, stood solemnly on the tarmac.

The special flight touched down at 3:55 p.m. Twelve honor guards escorted and carried the casket to disembark from the plane.

Xi and others bowed three times before Jiang's remains and watched the casket being carried onto a hearse.

At noon, a farewell ceremony was held at Huadong Hospital in Shanghai. Staff members of the office of Comrade Jiang Zemin's Funeral Committee, officials in Shanghai, Jiang's relatives and friends, and medical staff paid their respects at the ceremony. As the hearse made its journey from the hospital to Shanghai Hongqiao Airport, Shanghai residents lined the streets to pay tribute to Jiang.

Jiang was hailed as an outstanding leader enjoying high prestige acknowledged by the whole Party, the entire military, and the Chinese people of all ethnic groups.

Jiang was a great Marxist, a great proletarian revolutionary, statesman, military strategist and diplomat, a long-tested communist fighter, and an outstanding leader of the great cause of socialism with Chinese characteristics. He was the core of the third generation of central collective leadership of the Communist Party of China and the principal founder of the Theory of Three Represents.