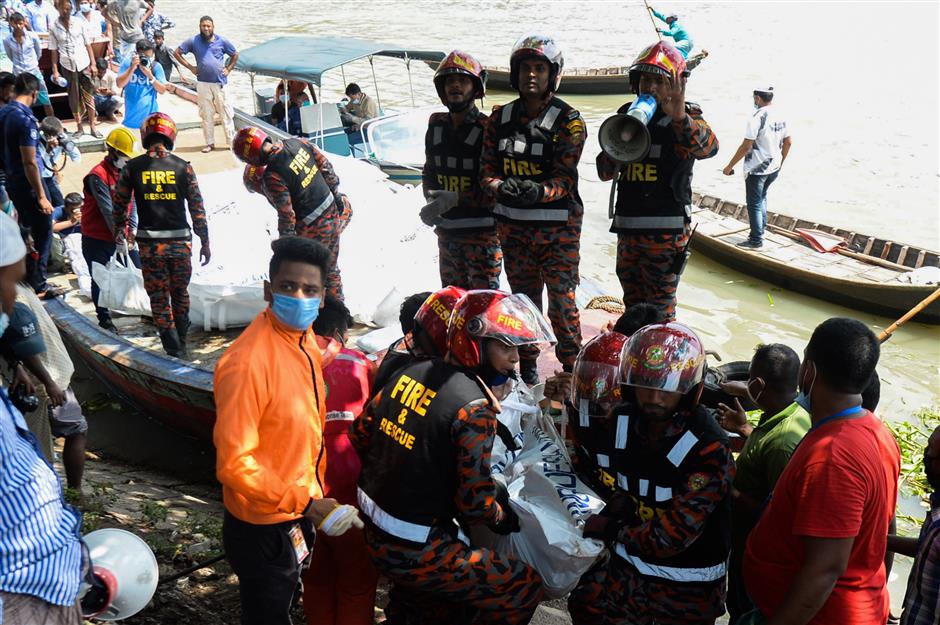 Rescue workers unload bodies of victims after a ferry capsized at the Sadarghat ferry terminal in Dhaka, Bangladesh on Monday. At least 30 people died and a dozen are missing.

At least 30 people died and a dozen are missing after a ferry capsized and sank on Monday in the Bangladeshi capital Dhaka following a collision with another vessel, rescue officials said.

The Morning Bird vessel was hit from behind by another ferry around 9:30am during the morning rush hour, when the country’s largest river port is packed with vessels.

“We have collected 30 bodies — 20 males, seven women and three children,” said Abul Khair, a diver in the fire brigade.

“There were at least 50 people on board ... Our rescue divers are still searching,” coastguard spokesman commander Hayet Ibne Siddique said.

The ferry — which departed from central Munshiganj District — sank as it was about to moor at Sadarghat, Dhaka’s main river port used by hundreds of boats to travel to the country’s south.

He said that the vessel had been cleared to carry passengers until September.

Witnesses told local television stations many passengers appeared to be stuck in the ferry’s cabins.

Divers were still pulling bodies from the wreck, in waters some 12-15 meters deep. The deceased were put in body bags before they were laid in rows at the harbor front.

Another boat would later arrive to lift the damaged vessel from the water, Siddique said.

Relatives gathered at Sadarghat despite social distancing concerns to search for their family.

“I still don’t know what happened to them,” a man, searching for his cousin and another relative, told reporters.

Boat accidents are common in Bangladesh, which is crisscrossed by more than 230 rivers. The South Asian nation is heavily reliant on ferries for transport but has had a poor safety record.

Experts blame badly maintained vessels, lax safety standards at shipyards and overcrowding for many of the accidents. In February 2015 at least 78 people died when an overcrowded ship collided with a cargo boat in a central Bangladesh river.