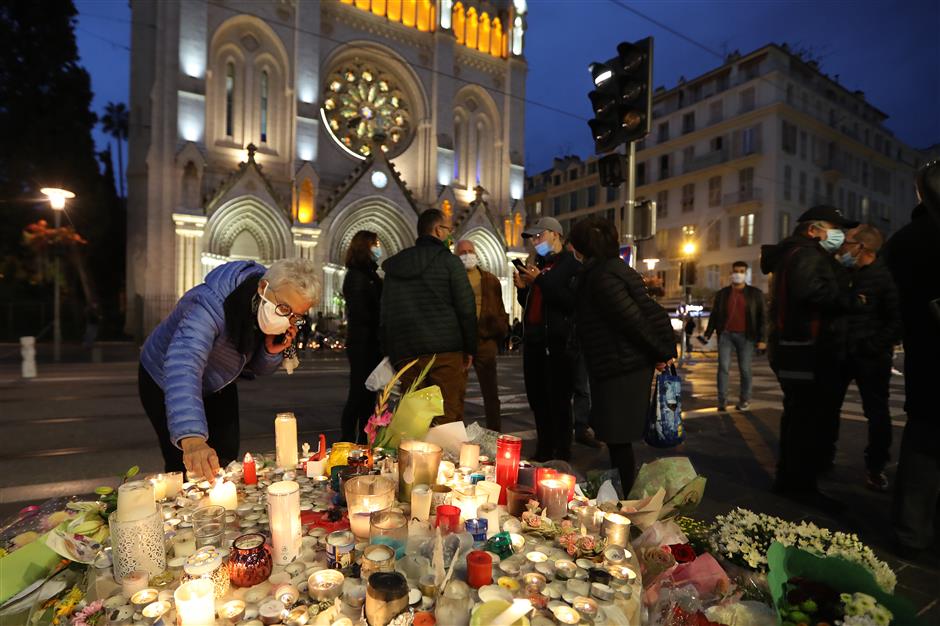 A woman lights a candle outside Notre-Dame de l’Assomption Basilica in Nice on Saturday, to pay tribute to the victims two days after a knife attacker killed three people.

The Tunisian assailant who killed three people at a church in France last week has tested positive for COVID-19, which could further delay his questioning, a source close to the inquiry said on Tuesday.

“He hasn’t yet been questioned, his prognosis remains uncertain,” another inquiry source said on Monday.

Issaoui, who was known to Tunisian police for violence and drug offences, arrived in France only last month, having first crossed the Mediterranean to the Italian island of Lampedusa.

Four more people were detained for questioning yesterday morning, including a 29-year-old man suspected of being in contact with Issaoui, a judicial source said.

They were taken into custody in the Val-d’Oise department just north of Paris, which has several suburbs with large immigrant communities.

Six people were previously detained over suspected links with Issaoui, but only one remained in custody on Tuesday — a 29-year-old Tunisian who was aboard the boat that brought Issaoui to Lampedusa, sources said.

Italian media reports say Issaoui was initially placed in quarantine with nearly 400 other migrants aboard a ferry boat before being allowed to disembark at Bari in southern Italy on October 9.