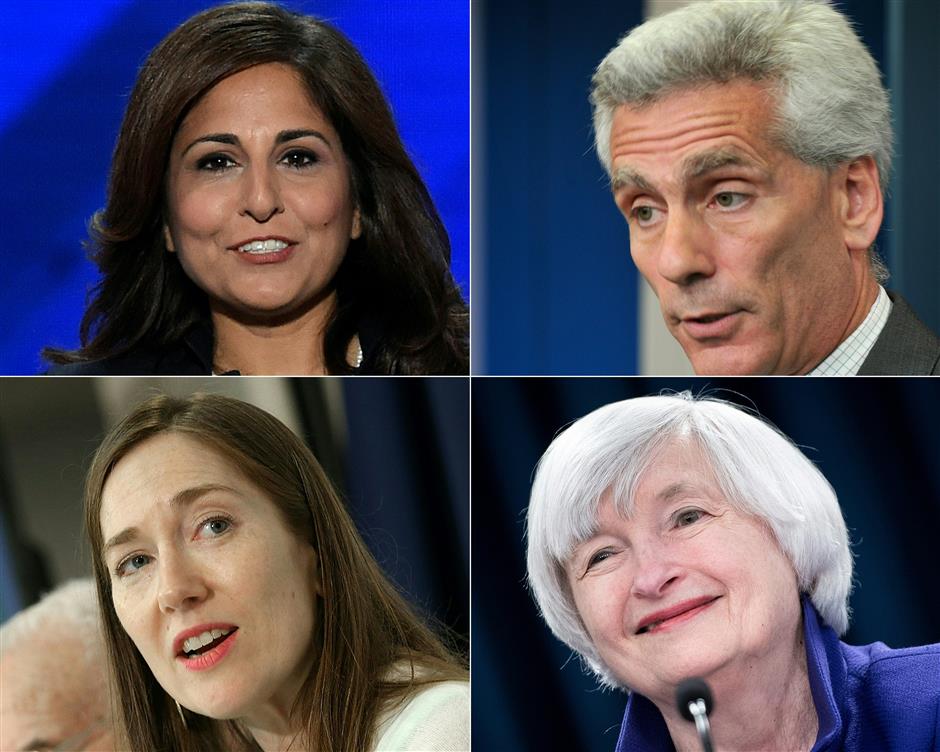 This combination of file pictures created on November 30, 2020 shows Neera Tanden, former President of the Center for American Progress Action Fund, during the third day of the Democratic National Convention at the Wells Fargo Center on July 27, 2016, in Philadelphia, Pennsylvania, Jared Bernstein, former Chief Economist and Economic Policy Adviser to US Vice President Joseph Biden, at the daily White House briefing in Washington on June 8, 2009, former Center for American Progress Senior Fellow Heather Boushey in a panel discussion on May 12, 2015, in Washington, DC, and a photo taken on December 13, 2017, of former Federal Reserve Board Chair Janet Yellen during a briefing at the US Federal Reserve in Washington, DC.

President-elect Joe Biden on Monday announced he will nominate former Federal Reserve chair Janet Yellen to lead the Treasury, topping a slate of economic officials who would break racial and gender barriers in the US government.

The rollout of Biden's economic team comes after running mate Kamala Harris made history as the first woman, first Black person and first person of South Asian descent to win the vice presidency.

If they win Senate approval, Yellen would be the first female Treasury secretary, and would be joined in the executive branch by the first African Americans to serve as her deputy and as head of the White House economic council, as well as the first South Asian in a key budget role.

"We face great challenges as a country right now. To recover, we must restore the American dream — a society where each person can rise to their potential and dream even bigger for their children," Yellen tweeted following the announcement.

"As Treasury Secretary, I will work every day toward rebuilding that dream for all."

Job No.1 for the 74-year-old, who previously made history as the first female Federal Reserve chief from 2014 to 2018, will be helping the US economy recover from the sharp downturn in growth and mass layoffs caused by the COVID-19 pandemic.

Unless lawmakers are able to overcome their differences in the closing weeks of the year, she will likely be tasked with convincing Democrats and Republicans in Congress to pass another spending bill to power the recovery amid a monthslong deadlock on new aid.

"As we get to work to control the virus, this is the team that will deliver immediate economic relief for the American people during this economic crisis and help us build our economy back better than ever," Biden said in a statement announcing his appointments.

He has stressed that he would strive for diversity while choosing staff for when he takes office in January.

Yellen's nomination was first reported last week, and Biden and Harris will present the nominees at an event on Tuesday.

Chuck Grassley, the Republican senator currently leading the Finance Committee that would hold Yellen's confirmation hearing should the party maintain its current control of the chamber following two January elections in Georgia, told reporters Yellen would likely get a "favorable view."

Many of the others tapped for Biden's economic team are veterans of former President Barack Obama's administration.

Nigerian-born Wally Adeyemo, a former deputy national security adviser and current president of the Obama Foundation non-profit, was picked as deputy Treasury secretary. He would be the first African American in that role.

Neera Tanden, president of liberal think tank Center for American Progress, was picked to head the Office of Management and Budget. If confirmed, she would be its first South Asian leader.

However, Tanden, former adviser to Hillary Clinton, who lost to Donald Trump in the 2016 presidential election, faces criticism from conservatives and progressives alike which could jeopardize her chances of confirmation by the Senate.

Also named was Cecilia Rouse, the dean of the Princeton School of Public and International Affairs, tapped to chair the Council of Economic Advisers, who would be the first African American in that post.

Jared Bernstein, who previously advised Biden when he was vice president under Obama, will join the CEA, as will Washington Center for Equitable Growth President Heather Boushey.