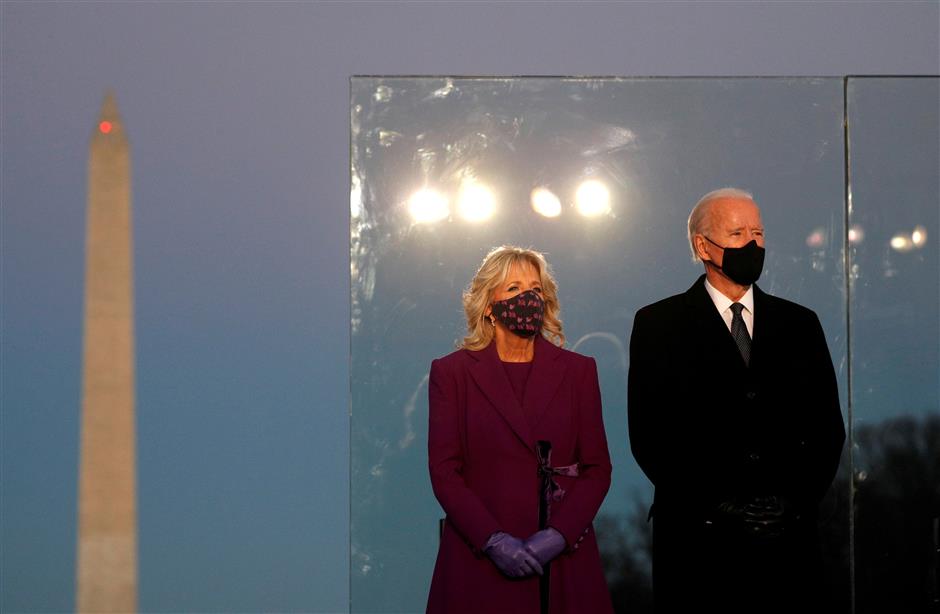 US President-elect Joe Biden and his wife Jill Biden attend a COVID-19 memorial event at the Lincoln Memorial in Washington, US on Tuesday.

More than 400,000 people have died from COVID-19 in the United States since the pandemic began, according to Johns Hopkins University on Tuesday, the eve of the presidential inauguration of Joe Biden, who has made the fight against the coronavirus a priority of his first term.

The bleak threshold was reached only about a month after the US recorded its 300,000 death from the disease in mid-December, and nearly a year since it announced its first COVID-19 death at the end of February 2020.

The death toll in the country remains by far the highest in absolute terms, though some other countries are registering more deaths in proportion to their populations, such as Italy, Britain and Belgium.

After the first death was announced in the US in February last year, it took about three months to pass the 100,000 mark, during a first wave that hit New York particularly hard.

But as cases have surged across the country with the arrival of winter and the holiday season in recent months, deaths have followed suit.

About one American in two believes the virus is not under control, according to a Washington Post-NBC poll released on Tuesday.

About 120,000 people are hospitalized because of the coronavirus, according to the COVID Tracking Project, which daily analyzes data from across the country.

In total, the US has recorded more than 24.1 million coronavirus cases, according to Johns Hopkins University.