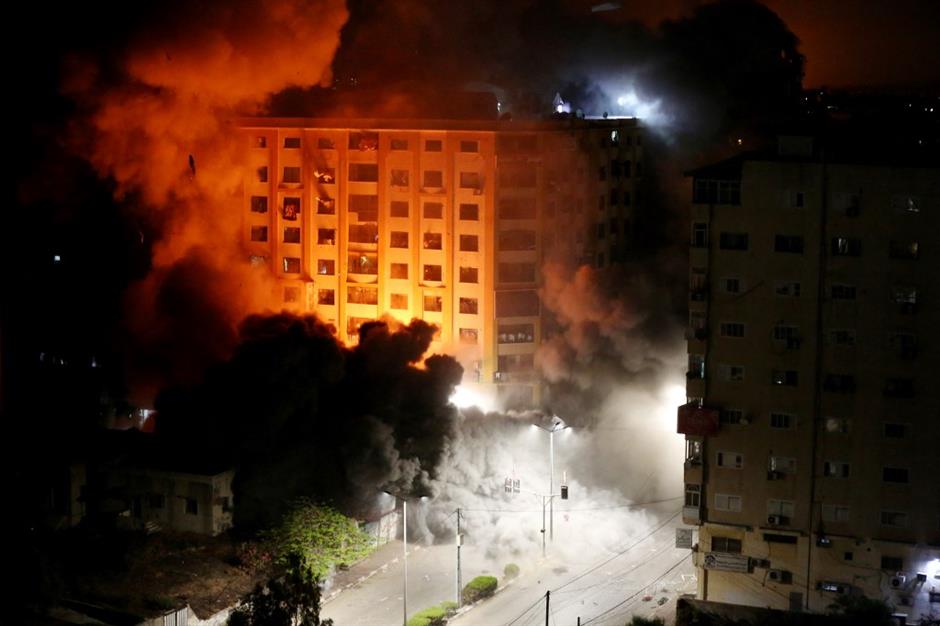 A picture taken early on May 12, 2021 shows smoke billowing from Al-Jawhara Tower in Gaza City's Al-Rimal neighbourhood which was targeted by Israeli airstrikes overnight. Israeli air raids in the Gaza Strip have hit the homes of high-ranking members of the Hamas militant group, the military said Wednesday, with the territory's police headquarters also targeted.

Israel is studying whether conditions are right to stop bombing Palestinian militants in Gaza but is preparing for "more days" of strikes if necessary, an Israeli military source said Wednesday.

"We are looking at when is the right moment for a ceasefire," said the source, who spoke on condition of anonymity, amid an international diplomatic push to broker a truce after more than a week of bloodshed.

Deafening air strikes and rocket fire once more shook Gaza early Wednesday in the conflict that has claimed the lives of 219 Palestinians and 12 people in Israel, according to authorities on each side.

But Israel was now evaluating whether its objective of degrading the capabilities of Gaza's Hamas rulers had been achieved, the military source said, and "whether Hamas understands the message" that its rocket barrages toward Israel cannot recur.

Prime Minister Benjamin Netanyahu said Tuesday that Israel's air campaign had set Hamas back "many years" since it began on May 10 in response to the start of Hamas rocket fire on Israel.

Warplanes hit Gaza City again in the pre-dawn hours, as the Israeli military kept targeting militant leaders and infrastructure in the crowded enclave which has been under Israeli blockade for nearly 15 years.

Gaza mother-of-seven Randa Abu Sultan, 45, recounted how her family crowded into one room to sit out another night of fear.

"We're all terrified by the sound of explosions, missiles and fighter jets," she said. "My four-year-old son tells me he's scared that if he falls asleep, he'll wake up to find us dead."

The United States, a key Israel ally, has repeatedly blocked adoption of a joint UN Security Council statement calling for a halt to hostilities.

US President Joe Biden told Netanyahu on Monday that he backs having a ceasefire, but he stopped short of openly demanding a truce.

A UN Security Council meeting broke up without issuing a statement late Tuesday, but France then said it had proposed a resolution calling for a ceasefire, in coordination with Israel's neighbours Egypt and Jordan.

Zhang Jun, Beijing's ambassador to the UN, told reporters his team had heard the French ceasefire proposal and China was "supportive".

Another diplomat said the proposal would seek to end hostilities, but also "allow humanitarian access".

EU foreign policy chief Josep Borrell backed mounting calls for a ceasefire and urged the Israeli military to act in a "proportionate" manner.

"We'll continue as long as necessary to bring... quiet back to the citizens of Israel," he added.

Hamas has launched nearly 3,700 rockets at Israel since May 10, prompting many people living in communities near the border to hide in bomb shelters virtually around the clock.

Palestinian rocket fire has killed 12 people in Israel, including one Indian and two Thai nationals, and injured 333, Israeli authorities said.

Overnight, armed groups fired 50 rockets toward southern Israel, 10 of which fell short and struck inside Gaza, the Israeli military said.

The Israeli army said it had attacked "40 underground Hamas targets" overnight in the southern Gaza Strip.

Israeli air strikes have killed at least 219 people in Gaza, including 63 children, and wounded 1,530, according to health ministry figures.

In the enclave's north, a journalist working for Hamas-linked Al-Aqsa radio was killed when an Israeli strike hit his home, authorities said.

Hospitals in the territory have been overwhelmed by patients, there are frequent blackouts and sewage from broken pipes has flooded some areas.

Some 72,000 civilians have fled their homes, seeking refuge in UN-run schools and other public buildings, the United Nations says.

An international aid convoy that started rolling into Gaza from Israel Tuesday was halted when Israel swiftly ended its reopening of the Kerem Shalom border crossing, citing a mortar attack on the area.

An air raid Monday knocked out Gaza's only COVID-19 testing laboratory, the health ministry said, and the Qatari Red Crescent said a strike damaged one of its offices.

The latest escalation was sparked after clashes broke out at east Jerusalem's flashpoint Al-Aqsa mosque compound, one of Islam's holiest sites.

This followed violence over the planned evictions of Palestinian extended families from homes in Jerusalem's Sheikh Jarrah district.

The conflict has since sparked mob violence between Jews and Israeli Arabs, and sharply heightened tensions in the occupied West Bank.

Palestinians clashed with police in multiple towns and in annexed east Jerusalem Tuesday after Palestinian president Mahmud Abbas's Fatah movement had called for a "day of anger".

The death brought to 24 the Palestinians killed in the territory since May 10.

The Palestinian Red Crescent said its teams had treated more than 150 people in Jerusalem and the West Bank, including 35 with bullet wounds.

The Israeli army said troops came under fire north of Ramallah, and two of its soldiers were wounded.