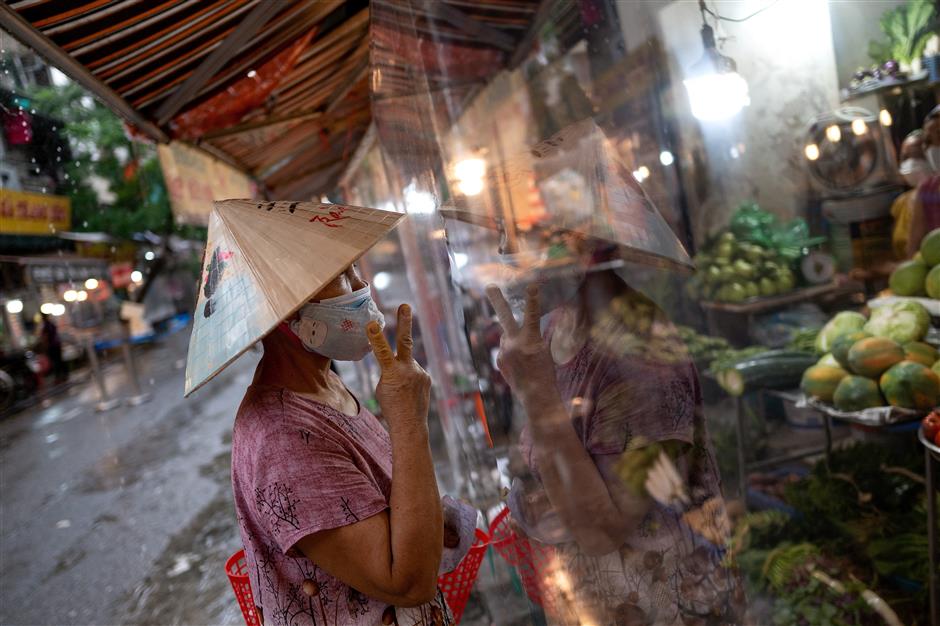 A woman gestures to a vendor from behind a plastic sheet set up to minimize close contact at a wet market in the old quarters of Hanoi on September 24, 2021.

East Asia and the Pacific region's recovery has been undermined by the spread of the COVID-19 Delta variant, the World Bank said on Monday, calling for a comprehensive strategy to contain COVID-19 and boost inclusive growth.

Economic activity began to slow down in the second quarter of 2021, and growth forecasts have been downgraded for most countries in the region, according to World Bank's newly released East Asia and Pacific Fall 2021 Economic Update.

"Whereas in 2020 the region contained COVID-19 while other regions of the world struggled, the rise in COVID-19 cases in 2021 has decreased growth prospects for 2021," said World Bank Vice President for East Asia and Pacific Manuela Ferro.

Noting that there is variation across countries, Aaditya Mattoo, chief economist for East Asia and the Pacific at the World Bank, told Xinhua in a remote interview on Monday that some countries like China have been relatively successful in at least keeping this virus at bay, but other countries which had done well previously, especially like Vietnam and Malaysia, are now struggling to contain it and are suffering a "significant" contraction in economic activity.

Others like the Philippines and Indonesia, he continued, had always struggled and their struggles have been "worse," so they are also seeing a contraction in economic activity and forecasts for them are less promising than before.