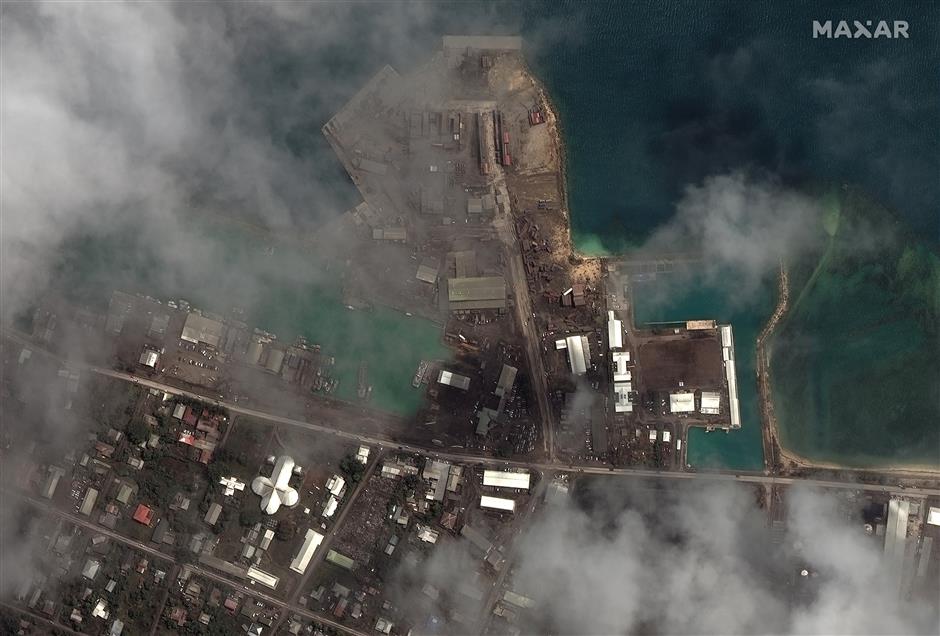 An interim telecommunication system has been set up in Tonga to allow its connection with the rest of the world using 2G networks, New Zealand's Ministry of Foreign Affairs and Trade said on Wednesday.

Digicel, the international mobile phone network provider, has set up an interim system on Tongatapu using the University of South Pacific's satellite dish which may allow 2G connection to be established on Wednesday, according to the foreign ministry.

However, this connection will be limited and patchy covering about 10 percent of usual capacity and prioritizing voice and SMS communications, it said.

Power in the Pacific islands country has been restored, with clean-up and damage assessments ongoing. Tongan authorities have been distributing relief supplies.

Work to clear the airport runway continues and is expected to be completed on Wednesday, said a statement of the ministry.

Three fatalities, two Tongan nationals and a British national, have been confirmed. No further deaths have been reported, it said.

On Tuesday overnight, the Tonga government issued its first official media release since the eruption.

Water supplies have been affected by volcanic ash, it said, adding challenges to sea and air transportation remain due to damage sustained by wharves and ash covering runways.

The Tonga government has approved the arrival of two navy vessels HMNZS Wellington and HMNZS Aotearoa, which departed New Zealand on Tuesday. The vessels are expected to arrive in Tonga by Friday depending on weather conditions.

A C-130 Hercules aircraft of the New Zealand Air Force is on standby to deliver humanitarian aid and disaster relief stores including collapsible water containers, generators and hygiene kits for families once the airport runway is cleared.

A second NZDF P3 Orion surveillance flight is being conducted on Wednesday. This flight will include a survey of Fiji's southern Lau Islands, at the request of the government of Fiji, to check for potential tsunami damage, said New Zealand's foreign ministry.

"Water is among the highest priorities for Tonga at this stage and HMNZS Aotearoa can carry 250,000 liters, and produce 70,000 liters per day through a desalination plant," Henare said.

Tonga is currently free of COVID-19 and operates strict border controls to keep the virus out. All current support is being delivered in a contactless way. Officials are in discussions around long-term options for support, said New Zealand Foreign Minister Nanaia Mahuta.

The tsunami had a significant impact on part of the foreshore of Tonga, with boats and large boulders washed ashore and shops along the coast damaged.