Journalism can thrive in tech era 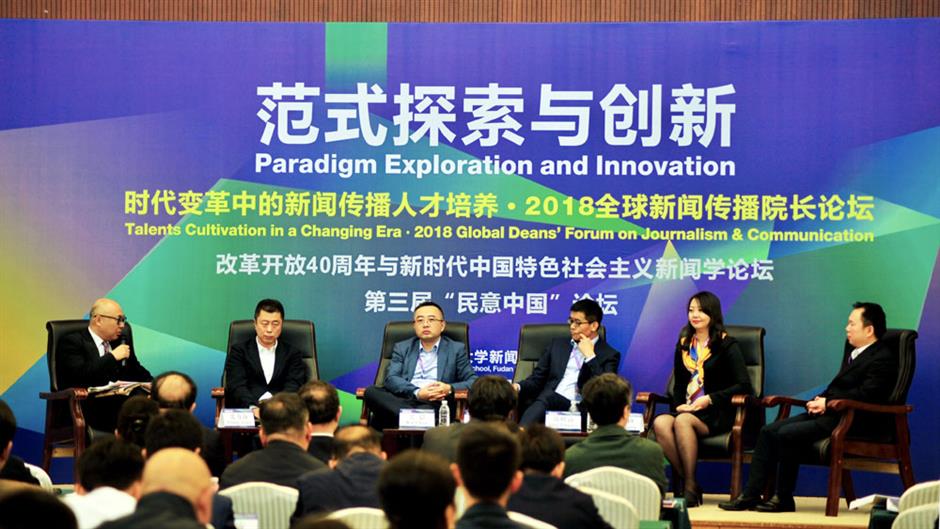 Leading teachers and media employers come together at Fudan University to explore the needs of today’s journalism talent at a time when digital skills are more valued than ever before.

Tremors of radical change are shaking up the communication and journalism industries, particularly in the way professionals are trained, according to leading teachers and media employers who came together at a recent forum at Fudan University that explored the new needs of today’s talent.

A smooth transition from the life of a journalism student to that of a media professional goes far beyond mere academic tuition, according to Mi Bohua, dean of the Fudan University School of Journalism, who spoke at the opening ceremony. He added that social responsibility and fast changing technology are just two of the many challenges journalism educators face today.

It is easy to blame new technology for the narrowing of traditional avenues of journalism and communication, but Zhao Yunze, vice dean of Renmin University School of Journalism, disagrees. He suggests that the problem doesn’t lie with technological change outpacing development of new training regimes, and places the blame firmly at the journalists’ own door, accusing them of wallowing in self-pity and stripping journalism of its glorious past.

Zhao believes that it will soon be even more difficult to recruit journalism students if media professionals and educators keep up their pessimistic front. The revival of journalism will happen only when we abandon vacuous debate and take on a pro-technology mindset, he said.

She is more upbeat about the rapidly evolving technology ecosystem.

She shared her experiences from a job hunting platform. The website she used revealed the yawning pay gap between media professionals with and without technological skills.

An entry-level professional with excellent tech skills can demand up to three times as much as those coming from purely editorial backgrounds.

According to Chen the solution lies with those who design the curricula at journalism schools. During a survey of journalism courses at Chinese universities, she found that of the 80 or so courses most journalism students take, usually only two to three of them were devoted to what could be described as “technology.”

“My biggest concern is that educators and students haven’t realized that technology is missing from our teaching,” concluded Chen.

During a panel discussion editors-in-chief from leading media companies discussed the problem of status quo in the industry and their expectations for new talent.

Cao Zenghui of weibo.com explained how media today often only provides a means of exchange rather than any original content. “To be frank, there isn’t a single editor or reporter on my team,” said Cao. “We obtain and spread information through sharing with traditional media and our own users.”

Clearly there are concerns about the authenticity of shared information and opportunities to deliberately spread “fake news” in the absence of traditional journalists’ professional knowledge. Furthermore, Cao firmly believes that a journalist’s capacity to summarize and explain content will never be fully replaced by self-media.

ThePaper.cn has lived through the transformation from traditional newspaper to new media. Its editor-in-chief Liu Yonggang said that they had not dismissed a single employee during the transition. All journalists and photographers were retrained by newly recruited technology talent and their production of original content remains central to ThePaper.cn brand.

“At the moment, I’m still working as an editor-in-chief from the classical point of view,” Liu said. “We stick to the old values in selecting topics and editing content. Our recruitment criteria will stay focused on pure journalistic qualifications.”

Liu said that both journalism educators and students have misgivings about the shrinking job market and confidence is at a low.

“I believe that the media today is a lot more powerful than before. If we look at journalism from a broader perspective, our students may have more opportunities in new media, but what really matters are the professional ethics and values of traditional journalism,” he said.

One prominent role of journalism is to warn society of approaching danger. From “the very first howling of the monkey on guard” to screen-flooding messages about the oncoming typhoon, journalists will always be the most reliable way to pass on knowledge and information. As a result, journalism, in some form or another, will survive the next stage of revolution.

Many teachers and students are introducing science and technology into teaching, as is necessary. But these things are just the vehicle by which the message is carried. At the core of journalism is an emphasis on accuracy and reliability. That looks likely to remain the case in the future.