Shanghai takes the lead in sorting out a sustainable future 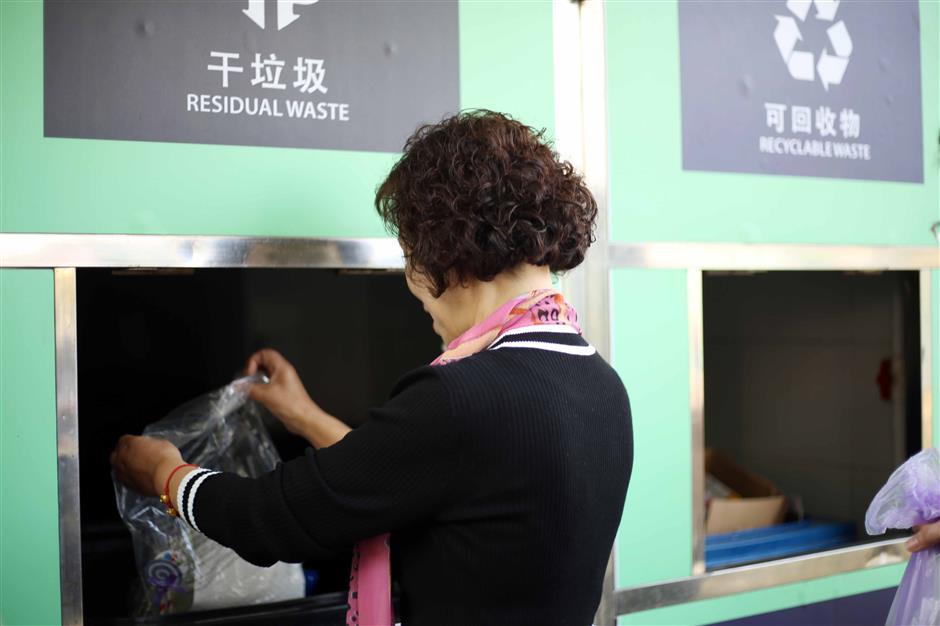 A woman sorts her garbage in a residential community in Xuhui District, Shanghai, on October 24, 2018.

On November 6, President Xi Jinping, while visiting a community center in Hongkou District, commented that waste-sorting is a “new fashion,” and that Shanghai should make sure that garbage management is done well.

Waste management is a growing issue for cities and, increasingly, villages as well. An enlightened resident can no longer simply drop anything into a rubbish bin and forget about it. We are all too well aware that unless our trash is disposed of properly — every day a more challenging affair — it may return to haunt us, not just in the bulging suburban landfills encroaching upon us, but also in the air, water and food that our lives rely on.

Properly sorted garbage saves landfill space, as some trash can be recycled, reused, buried, incinerated, or used as fuel.

In 2000, Shanghai was one of first eight cities to pilot garbage sorting. By the end of this year, 46 cities are expected to demonstrate best practices in rubbish sorting.

On the face of it, sorting should be a simple procedure, at least for residents who have woken up to the fact that trash sorting is vital to the treatment and efficient disposal of waste.

In reality, promoting sorting as a general practice across a neighborhood — not to say across the city — is a great challenge. After ten years of "sorting" on a trial basis in the eight selected cities, it was found that sorting was more about publicizing than a matter of substance.

Effective sorting needs to be done with resolution, perseverance, innovation and finesse.

In Longbai Huayuan in Changning District, for instance, originally four bins labeled “wet,” “dry,” recyclable” and “hazardous” were placed side by side. While the fine distinction makes a lot of sense, upon consideration, the number of trash boxes has been reduced to “dry” and “wet,” on the assumption that this is enough for beginners.

The challenge for arriving at semantic clarity also explains some of the confusion observable on the streets. Today, predominant trash receptacle generally consists of two units labeled literally “dry” and “recyclable,” though I am still trying to figure out how these two labels come to be dichotomies, and why the corresponding English equivalents given are “residual waste” and “recyclable.” Icons and verbal instructions clarify the situation somewhat, though they are not always available, or conspicuous enough.

Adding to seeking semantic clarity is the challenge of educating people long accustomed to viewing putting trash into any garbage bin as a civic virtue. This entails meticulous work, not just for each individual who produces trash, but community work as well: Giving lectures in neighborhoods, handing out pamphlets and brochures, giving people trash bins for their homes with separate chambers for dry and wet waste, friendly persuasion, on-site patrols ... In some kindergartens children play a game designed to teach them how to properly sort their trash.

An old neighborhood in Shanghang New Village in Changning District was among the first to test fixed-time, fixed-location garbage drop-off. The initiative met with some resistance in this neighborhood largely peopled by migrants from other provinces. What emerged was that it is more effective for fellow townsfolk to persuade each other than to be preached at by "outsiders." In some communities, Party members and officials are on site to ensure compliance.

According to an ambitious municipal three-year plan, household garbage sorting should be a general practice by 2020. By then all households will be expected to classify their trash into four types: hazardous, recyclable, dry, and wet.

In a world that prides itself on convenience, as represented by disposables and consumerism, the matter of waste sorting entails a conceptual leap forward, whereby a process of simply dumping anything we want onto one giant bin becomes a complicated, messy business.

Pampered by convenience in all its multifarious forms, we are accustomed to easy answers, gift-wrapped solutions, a silver bullet.

It has never been easier to get "stuff." Huge quantities of what will eventually become trash are delivered to our doorsteps as a direct result of a few desultory taps on our phones. A simple, passing impulse is all that is required. It is only when we are confronted with the messy and smelly stuff left behind that we begin to question the throwaway society we have created.

Garbage sorting and fixed-time collections put the onus of garbage sorting on those responsible for creating the trash in the first place. The tedious business should make us think twice before we splurge out on something we do not really need and will junk soon afterwards.

Inconvenience should compel us to link our individual excesses with such issues as prolonged heatwaves, melting glaciers, rising sea levels and myriad signs of environmental deterioration on this finite planet.

By exemplifying the best practice in sorting, Shanghai is playing a role in ensuring that our inevitably shared future is a sustainable one for all.

Shanghai people have long been recognized for their astuteness, their attention to detail, their heightened sense of discipline and a ceaseless pursuit of perfection.

All these qualities, as expressed through this sorting endeavor, will be valuable weapons in what is bound to be an uphill battle.