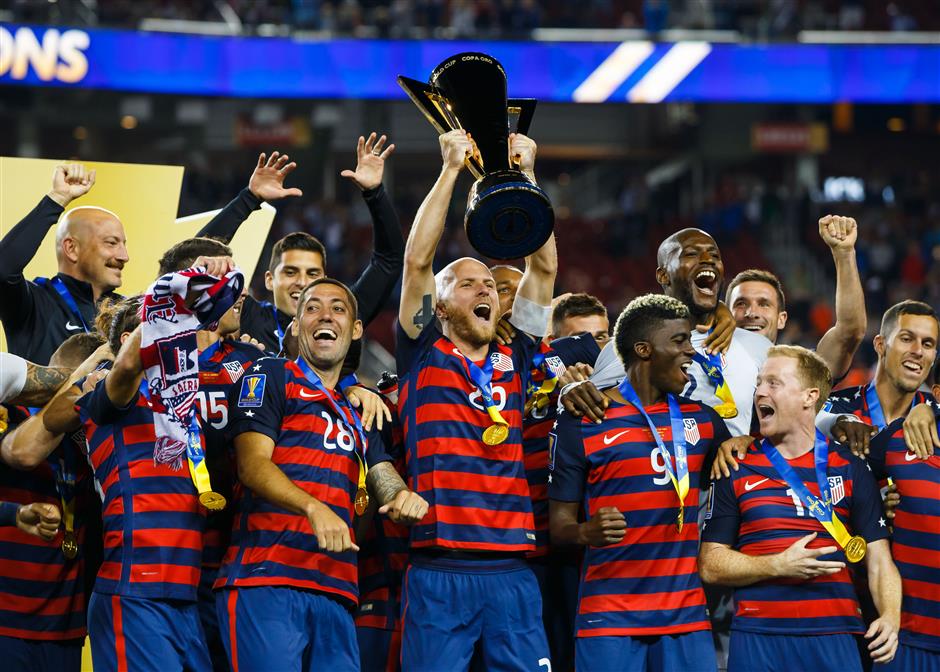 United States midfielder and captain Michael Bradley hoists the trophy as he celebrates with teammates after defeating Jamaica 2-1 in the CONCACAF Gold Cup final at Levi's Stadium in Santa Clara, California, on July 26, 2017.

As the victorious American players bounced so hard the podium shook, medals round their necks, a beaming Bruce Arena in the back raised his arms to the air right along with them as gold confetti began to fall.

The United States resurgence is off to an impressive start since Arena returned late last year. Another CONCACAF Gold Cup crown, and now on to more important business: qualifying for next year's World Cup.

Former Stanford star Jordan Morris scored a tiebreaking goal in the 88th minute , and the US beat Jamaica 2-1 on Wednesday night for its sixth Gold Cup title and first since 2013.

Je-Vaughn Watson tied the score when he got away from Morris for a 4-yard volley off Kemar Lawrence's 50th-minute corner kick.

Morris, who left nearby Stanford in his junior year, has won the 2015 NCAA title, the 2016 MLS championship with Seattle and now the 2017 Gold Cup. He got the breakthrough goal with a 14-yard right-footed shot after Gyasi Zardes crossed. Jermaine Taylor tried to clear with a header and the ball was knocked by Clint Dempsey with a leg back to Morris.

"I was nervous. It was my guy that scored on the goal, so I was trying to make up for it any way that I could," Morris said. "Obviously. I take responsibility for that. But luckily I could put one in the back of the net."

It was the fifth international goal for the 22-year-old Morris, who tied 16-year-old Canadian Alphonso Davies for the tournament lead with three goals.

"That was like a dagger in the heart," Jamaica coach Theodore Whitmore said.

Arena took a moment after the final whistle to congratulate Morris for the pretty shot but also for how he answered from a mistake.

The US extended its unbeaten streak to 14 games (9-0-5) under Arena, who became the first coach to win three Gold Cup titles.

The Americans had a chance to go ahead in the 19th when Altidore's swerving 30-yard shot was parried by Blake, who dived left and then beat Kellyn Acosta to the rebound at the 6-yard box. Acosta collided with Blake and appeared to kick the keeper's right hand before Jamaica's Damion Lowe cleared. Blake's hand was wrapped but he couldn't continue and was replaced by Miller four minutes later. As Blake left the field, he acknowledged the cheering fans with a wave of his left hand, then later emerged for the medal ceremony with his hand bandaged after receiving seven stitches that will be in for 10 days. Nothing was broken.

"It was a pretty bad cut, I knew I wasn't able to continue," Blake said. "It happens sometimes."

Altidore put the US ahead with a curling shot past Miller's outstretched right hand into the upper corner of the net just beneath the crossbar, his 39th goal in 108 appearances.

Lawrence, who scored in a 1-0 semifinal win on Sunday against Mexico, took another corner kick in the 75th moments after Alvas Powell's shot from close range deflected off Graham Zusi — a sequence that had Howard yelling at his defense.

US captain Michael Bradley earned the Golden Ball at the tournament's top player.

Using a lineup with about half its regular starters — the rest are in preseason with European clubs — the US reached its record 10th final. The Reggae Boyz were a surprising final opponent after they stunned Mexico in a semifinal to reach the title match for a second straight time.

With 18 of 22 starters from Major League Soccer, this was a rematch of the 2015 Gold Cup semifinal won 2-1 by Jamaica in Atlanta, Georgia. For the first time since replacing Juergen Klinsmann in November, Arena kept his lineup unchanged. He inserted the 34-year-old Dempsey in the 55th.

Chunks of turf came loose yet again at Levi's Stadium in Santa Clara, California, the US$1.2-billion, 3-year-old home of the NFL San Francisco 49ers. The field has been an ongoing issue.

The Americans hope for momentum built during this run as they prepare to resume World Cup qualifying. The USfaces Costa Rica in a rematch of the Gold Cup semifinal on September 1 at Harrison, New Jersey, and play four days later in Honduras. The hex concludes against Panama on October 6 in Orlando, Florida, and in Trinidad and Tobago four days after.

"We're not worried one bit about World Cup qualifying today. I can promise you that," Bradley said. "This was about a group of guys winning a trophy and that's been the only goal."

Arena already was looking ahead.

"We're a long way from qualifying for a World Cup, and that's the objective, for sure," he said.

Serious? You bet. But he also had a little fun with his players as the bubbly flowed.

"I told the players if anyone sprays champagne on me they will not be considered for the next World Cup qualifier and also the World Cup if we reach the World Cup," Arena said. "So I'm dry right now. It's surprising, isn't it?"