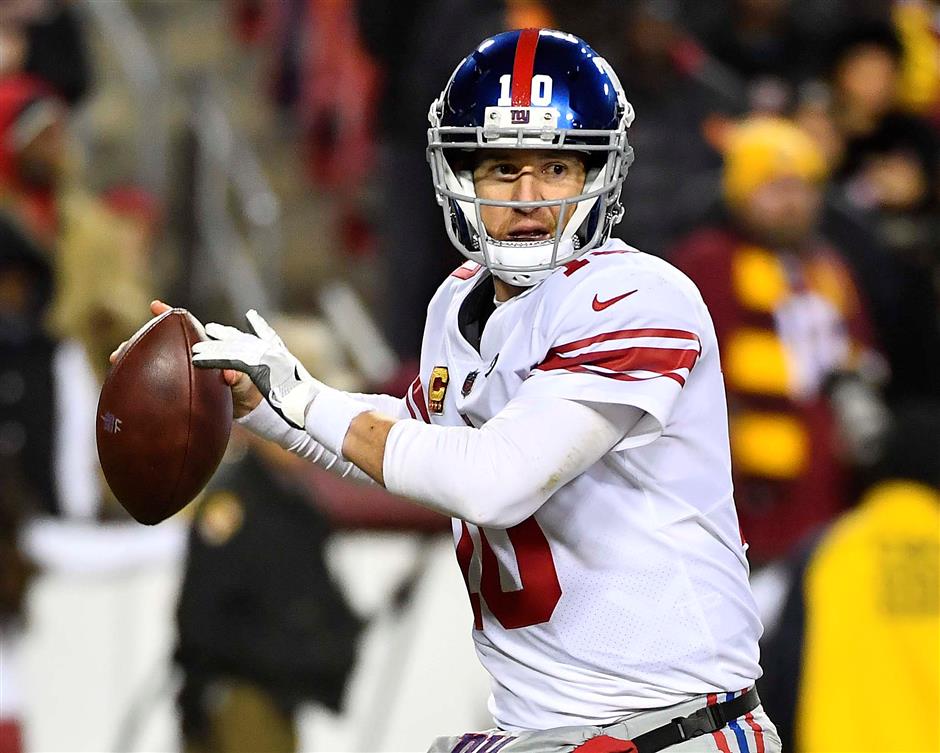 New York Giants quarterback Eli Manning attempts a pass against the Washington Redskins during the first half of their NFL game at FedEx Field in Landover, Maryland, on November 23, 2017. Manning's run of 210 straight regular-season starts for the Giants will end on December 3, 2017, when the struggling NFL team starts Geno Smith at quarterback against the Oakland Raiders.

The benching of Eli Manning for the first time in 13 seasons is probably the low point of a season in which the New York Giants did almost nothing right.

Let's start with the decision by coach Ben McAdoo and management to sit Manning with five games left in the regular season.

Sure, the Giants are 2-9, out of the National Football League playoff picture and they need to find out something about backup quarterbacks Geno Smith and rookie Davis Webb.

Benching the 36-year-old Manning wasn't the right thing to do, and it wasn't handled properly.

If anyone doubts that all they would have had to do was see the tears welling in the two-time Super Bowl MVP's eyes and the heartbreak his quivering chin displayed when asked how much this hurt.

The Giants offered Manning the opportunity to start and keep his streak of 210 consecutive starts alive, but the 14-year veteran didn't want to be part of a sham. If you start, you play to win, not keep a streak alive.

The wrong move has been par for the Giants, who were coming off an 11-5 season that got them into the playoffs for the first time since 2011.

However, all the close games the team won last season, it lost this year.

Injuries to Odell Beckham Jr and fellow receiver Brandon Marshall hurt, but that wasn't the reason the Giants, who have 19 players on injured reserve, lost this season.

The Giants knew after last season that they needed to improve a weak offensive line and general manager Jerry Reese did little to do that. He signed guard DJ Fluker when New York needed a solid tackle.

The offense as a whole also needed work. Beckham was the catalyst and had no supporting cast other than Manning and slot receiver Sterling Shepard. The signing of Marshall as the second outside receiver proved to be a bust, and the line only occasionally created holes for the running game.

McAdoo, who showed talent as the offensive coordinator under Tom Coughlin, has failed to get the offense in gear for Manning the past two years. Manning is a pocket quarterback who has been hit a lot the past two seasons playing without a line, a running game and viable outside receivers other than Beckham.

While the defense had most of its key players returning this season, something seemed to be missing. Steve Spagnuolo's unit was very good at closing out games last season. In getting off to a 0-5 start, the defense failed to hold fourth-quarter leads in consecutive losses to Philadelphia, Tampa Bay and the Chargers.

Even the special teams have struggled with punter Brad Wing having an inconsistent season and rookie placekicker Aldrick Rosas missing five of 18 field goal attempts and booting a couple of kickoff out of bounds.

The losses took a toll on the players with cornerbacks Dominique Rodgers-Cromartie and Janoris Jenkins each being suspended by McAdoo for a game for breaking team rules.

It led many to wonder if McAdoo had lost control of the team in only his second season and whether he would be back next year.

Co-owners John Mara and Steve Tisch have to decide his future. Reese is almost sure to be fired.

"This is not a statement about anything other than we are 2-9, and we have to do what is best for the organization moving forward, and that means evaluating every position," Reese said in a statement on Tuesday. "I told Eli this morning that an organization could not ask for any more in a franchise quarterback. He has been that and more. Nobody knows what the future holds, but right now, this is what we think is best for the franchise."

"It's a gut punch to everybody, whether you're former player, whether you played with Eli, against Eli, whether you're a fan," O'Hara said. "This feels like a punch right to the stomach. I've been sick, I've been angry. I've also been relieved because now Eli doesn't have to go out there and try to win games with that shoddy roster and the people around him."

Whether Manning returns remains to be seen.