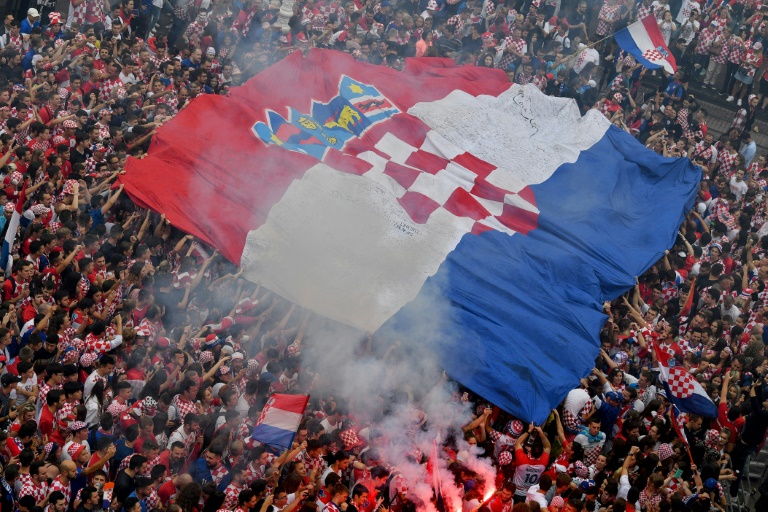 Croatia may have fallen short in the World Cup final but the team's feats in the tournament has boosted the small Balkan nation's morale and many hope it could help its struggling economy and image abroad too.

During their run through the competition, captain Luka Modric and co. wowed fans around the world with their attacking style and dramatic comeback wins.

"We have won the sympathy of the entire world," said Miroslav Milosevic, legendary coach of the team which reached the semi-final of 1998.

This time round the team went a step further -- their first ever World Cup final -- only to lose against France on Sunday in an enthralling 4-2 battle.

The team have "made Croatia a better country," said leading daily newspaper Vecernji List on Monday.

The euphoria contrasts starkly with the sour rancour that has plagued Croatian football in recent years over scandals involving corruption, racism, and fan violence.

At Euro 2016 in France, Croatian supporters fought among each other, while a swastika was spray-painted on the pitch in Split by ultra-nationalists in 2015.

Fans also twice forced the stoppage of a European Championships qualifier against Italy in 2014 after firing flares onto the pitch.

But the "Vatreni" ("Fiery Ones" in Croatian) may radically change perceptions of the country's image, according to Bozo Skoko, a public relations expert in Zagreb.

"The passion, perseverance, heart and courage shown by the players on the pitch is part of Croatia's national identity, and that now has been displayed on the global stage," Skoko told AFP.

"We have to ride this wave of optimism," she said before the final.

Although criticised by many at home – two thirds of one poll called her behaviour "vulgar and inappropriate" - Grabar-Kitarovic's enthusiasm was well-received by fans abroad on social media.

"It's been a superb promotional campaign, more effective than the 1998 success when the western press was still writing mainly about the (Franjo) Tudjman regime," said Loic Tregoures, an expert on football in the Balkans, referring to the country's authoritarian 1990s leader.

"The media attention and popularity of the team will surely reflect on tourism income, and will have an impact on the country's economy," Skoko told AFP.

Economic figures currently paint a bleak picture however, which has led many Croatians to wonder if joining the EU in 2013 has improved people's lives.

Average wages have stagnated at around 830 euros per month, while unemployment is persistently more than 10 percent.

Analysts point to deeply embedded clientelism and corruption, and lack of reforms, as underlying structural problems.

Croatia is also dogged by negative demographic trends in part caused by alarming levels of emigration.

An expert Stjepan Sterc has warned that Croatia's population could drop under three million if current trends continue.

Around 40,000 people left the country in 2017, according to official data, although some estimates put the figure at around double that figure.

Despite a booming tourism sector that makes up around 20 percent of the country's GDP - more than 18 million tourists visited last year - droves of young people have opted to emigrate in recent years in search of a better life abroad.

But the World Cup exposure can draw even more tourists to the country's stunning island-studded coastline and crystal-clear waters, said Croatian tourism chief Kristjan Stanic in a statement Sunday.

After the semi-final win against England the national tourism board released a promotional clip "Croatia Full of Life" that featured Modric, Mario Mandzukic and Ivan Rakitic showcasing beauty spots like the Plitvice lakes and the ancient coastal city of Split.

"You must visit our national parks," said a beaming Rakitic in one section.

On World Cup Final day the board said its online page views grew by 200 percent, compared with the same day in 2017.

But locals complain that many tourist hotspots on the coast like the city of Dubrovnik are already saturated, while hopes of an economic bounce from the World Cup were dismissed as "no chance" by the academic Tregoures.

"The boost to morale could perhaps translate into a mini-boom for some months, but it won't stop young people from leaving, and as for tourism, it's already full house," he said.