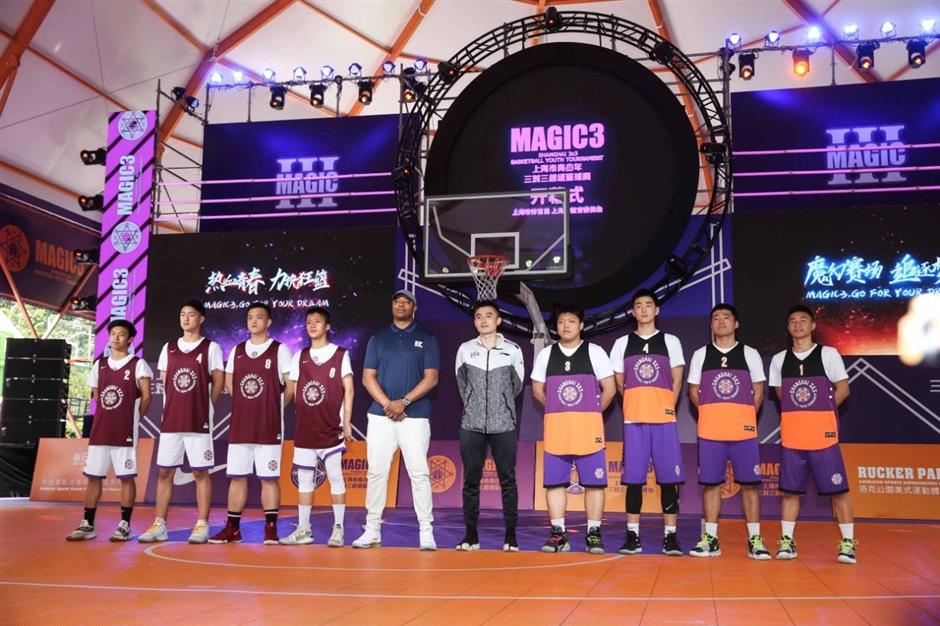 The opening ceremony of the MAGIC3 Shanghai 3x3 Basketball Youth Tournament was held over the weekend.

The opening ceremony of the MAGIC3 Shanghai 3x3 Basketball Youth Tournament was held at Pudong’s Yuanshen Stadium over the weekend.

The tournament, in its inaugural year, aims to encourage local youngsters join the basketball fever before the 2019 FIBA World Cup, which will be held in China later this year.

The opening ceremony was attended by local sports officials, former National Basketball Association player Caron Butler and Luo Hanchen, who plays for the Shanghai Sharks in the Chinese Basketball Association. The opening match on Saturday was between the Shanghai High School International Division team and the High School Affiliated to Shanghai Jiao Tong University. Butler and Luo gave instructions to the teams before the match, which the Jiao Tong University High School won 12-5.

All youngsters in Shanghai aged between 16 and 18, regardless of nationality, can form teams to register. According to the organizers, nearly 1,000 teams, representing 500 school or clubs, had already registered by last week. The next round of registration will last until May 26 and those interested can log on to www.MAGIC3.com.cn for more information.

The tournament is holding Preliminary Division matches from May 3 to June 16 with matches scheduled on weekends. Second-round matches will be played at venues in downtown from June 29 to July 14. The final will be held at Pudong’s Oriental Sports Center on July 27.

The top four male teams will be invited to an NBA and CBA star camp for training. After that, the organizers will invite another four foreign teams and hold an eight-team international competition.

The organizers hope the youth tournament will serve as a warm-up for the 2019 FIBA World Cup, which will be held from August 31 to September 15 in eight cities in China. Shanghai will host group-stage matches for the group comprising the United States, Turkey, The Czech Republic and Japan.