Source: Vogel hired as Lakers coach with Kidd as assistant

A person familiar with the search says the Los Angeles Lakers have hired Frank Vogel as coach and Jason Kidd as an assistant.

The person spoke on condition of anonymity on Saturday because Vogel's three-year contract has not been finalized. Vogel flew to Los Angeles on Thursday and met with a group that included owner Jeanie Buss, general manager Rob Pelinka and adviser Kurt Rambis.

The 45-year old Vogel worked for the organization before as an advance scout during the 2005-06 season. He did not coach last season following two years with the Orlando Magic. Vogel went to Orlando following five-plus seasons leading the Indiana Pacers, including trips to the National Basketball Association Eastern Conference finals in 2013 and 2014. He has a career record of 304-291.

Kidd interviewed with the Lakers last month. The former star player who was a head coach in Brooklyn and Milwaukee was fired by the Bucks during the 2017-18 season. He has a 183-190 record.

The Lakers have missed the playoffs six straight seasons. The drought was expected to end this season but injuries to LeBron James, Lonzo Ball and Brandon Ingram, as well as internal discord, resulted in a 37-45 record.

It's an interesting pairing in many ways, including how Vogel was fired by Indiana in 2016 and Orlando in 2018 — and how he simply could never get past James in the playoffs.

The Pacers thought they had a title-contender in 2012, 2013 and 2014, and James and the Miami Heat eliminated them in all three of those postseasons. Vogel won 58 percent of his games in parts of six seasons with Indiana, but the lasting image of his tenure there is the fact that those clubs were always ousted by Miami.

Now, Vogel and James will be on the same side, both looking for a resurgence. This season was James' first without a playoff appearance since 2005 and ended his streak of eight consecutive trips to the NBA Finals. Vogel is coming off a 54-110 tenure in two seasons with Orlando, while the Magic were rebuilding. 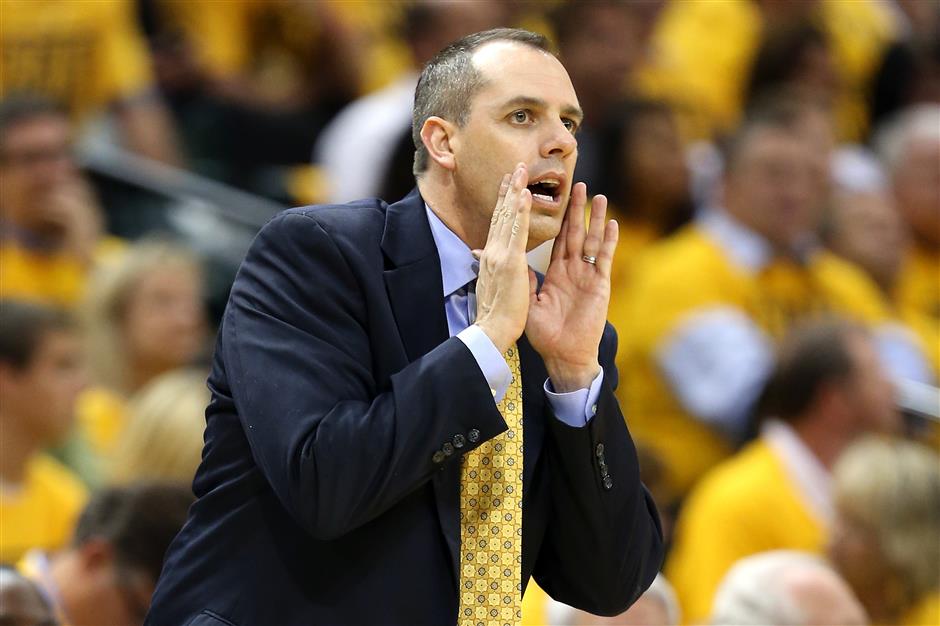 Vogel is known mainly as a defensive coach. Indiana led the league in defensive efficiency twice and was in the top 10 during his five-plus seasons. The Lakers were tied for 13th in defensive efficiency last season. An official announcement announcing his hiring might not come until Monday, which would mark the start of a busy week for the Lakers. They will take part in the draft lottery on Tuesday and will also be at the draft combine.

Vogel's hiring is the first step in what will be — and has already been — an eventful and critical offseason for the Lakers, who will be on their sixth coach since Phil Jackson stepped down after the 2010-11 season.

The firing of Luke Walton as coach on April 12 was not unexpected, and came three days after Magic Johnson stunned the team and just about everybody else by giving up his role running the club. Johnson, the former Lakers star, dropped that news in an impromptu news conference held roughly 90 minutes before the regular-season finale.

The Lakers pursued several other candidates, and appeared to be closing in on a deal with Tyronn Lue that would have looked to make sense in many ways. Lue played for the Lakers, was part of two teams that won championships there, and coached James to the 2016 NBA title in Cleveland. But that deal never got to the finish line, and the Lakers' search quickly moved toward Vogel.

The Lakers also considered Monty Williams, who was hired by the Phoenix Suns, and Juwan Howard and JB Bickerstaff

The Lakers expect to have more than US$40 million in salary cap space this summer and will likely resume their pursuit of Anthony Davis — who would have to be traded by New Orleans — either around the draft or the July 1 start of free agency. When that player-shopping window begins, the Lakers will likely try to land Kawhi Leonard and other big names who might be willing to play with James.

And there is a slew of roster work to do. The Lakers had several rotation players on either one-year or expiring deals this season, a list that includes Rajon Rondo, Kentavious Caldwell-Pope, Lance Stephenson, JaVale McGee and Tyson Chandler.