Antoine Griezmann's decision to leave Atletico Madrid has plunged the club into chaos and fired the starting gun for a summer scramble among Europe's elite.

Top scorer in each of his five seasons, Griezmann was the stardust of Atletico, offering spontaneity and craft in a team renowned for discipline and grit.

But he grafted too, which is why he was the perfect fit. Griezmann would run and chase as much as he passed and shot, his willingness perhaps exceptional for one of the world's premium attackers, a class in which he now deservedly belongs.

"I said it last season and I'll say it again — Griezmann is the best player in the world," coach Diego Simeone said in October.

In a team that creates more chances and gives him a greater chance of converting them, Griezmann is likely to deliver an even better return than his 129 goals for Atletico in 256 games.

One more against Levante on Saturday will edge the Frenchman clear of Fernando Torres but Torres left a hero. Griezmann's exit will leave a bitter taste.

"The truth is it has been difficult to take this route but it's what I feel I need," Griezmann said in a video for the fans.

He will be too late for a last outing in front of them at the Wanda Metropolitano, perhaps out of respect for Diego Godin, the godfather to his daughter, who was given a rousing farewell on Sunday after the club's final home game of the season.

Perhaps Griezmann was wary too, unsure when he waved to the stands whether it would be waving hands he saw coming back.

The hope was he would be playing there in the UEFA Champions League final on June 1, the dream of hoisting a European trophy on home turf a key factor in his decision to reject Barcelona last year.

Godin would have led the team out but, at 33, with his best years behind him, he goes with the blessing of the fans, a La Liga title, two UCL finals, two Europa Leagues, three Super Cups and a Copa del Rey under his arm.

Griezmann, five years younger, should be entering his prime, and departs with only one Europa League and a Super Cup. Worse, most suspect he is about to strengthen Barcelona. 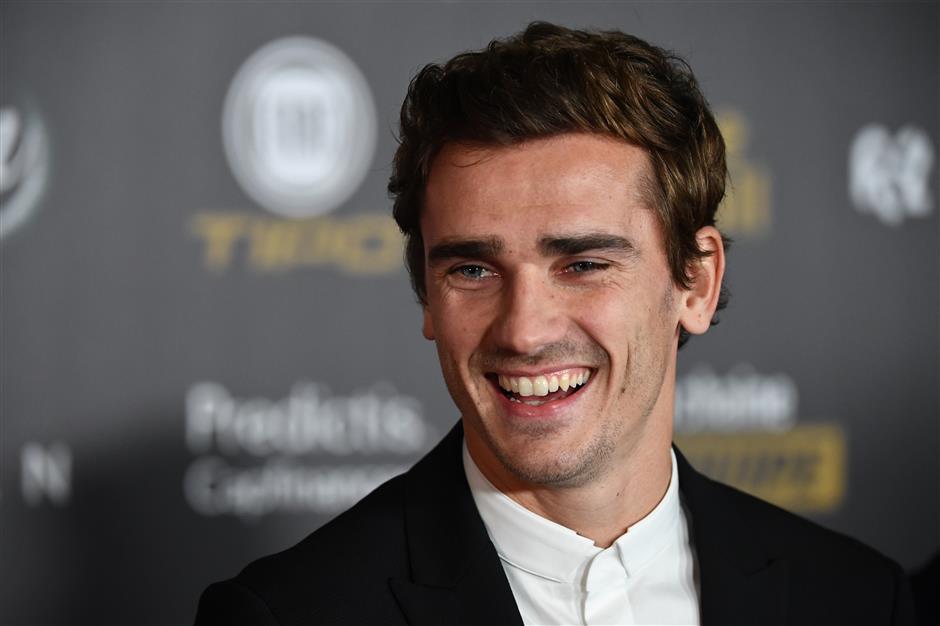 "I think my best time is still to come," Griezmann said in December. "I know I can get even better."

But his choice is a reflection on Atletico too, raising questions about the club's future under Simeone, who was there on Tuesday with chief executive Miguel Angel Gil Marin and sporting director Andrea Berta, when his star player said he needed something new.

Two of Atletico's three outstanding players — Griezmann, Godin and Jan Oblak — are about to move. Oblak signed a new deal last month but it contains a release clause, reportedly set at 120 million euros (US$135 million), hardly an obstructive price for arguably the world's No. 1 goalkeeper.

Lucas Hernandez has already agreed to join Bayern Munich. Juanfran, Filipe Luis or Rodrigo could be next.

Admiration for Simeone is unwavering among supporters but frustration simmers too over style and progress. Atletico sits 11 points behind Barcelona in La Liga, one year after the gap finished at 14.

Griezmann's early decision at least allows time for what is Simeone's biggest rebuild since he took charge in 2011.

He also begins it in a summer when Atletico's rivals are expected to respond to the success of the English Premier League with spending sprees of their own.

Neither Griezmann's rejection of Barcelona, nor the fans whistling him at Camp Nou, will deter the club from a fresh approach.

There have been whistles there as well for their own Philippe Coutinho, whose future would become even more uncertain with Griezmann's arrival.

A reduction in Griezmann's release clause from 200 million euros to 120 million euros on July 1, means there is also time for others to enter the bidding.

Paris Saint-Germain is likely to offer the fiercest competition, particularly if it lays down a financial package Barcelona cannot match.

Griezmann at PSG could in turn give encouragement to Real Madrid, whose president Florentino Perez retains a strong interest in both Kylian Mbappe and Neymar, each seen as the sort of statement signing to launch a glorious new era under Zinedine Zidane.

Another is Paul Pogba, who Real might find easier to lure if Manchester United framed Griezmann as his replacement. For Atletico, the knocks could keep on coming.