With Kawhi Leonard and Paul George agreeing to join the Clippers on Friday and the Lakers signing power forward Anthony Davis on Saturday, Los Angeles has emerged as the biggest winner in one of the wildest National Basketball Association free agency seasons in recent memory.

Leonard shook up the basketball world hours after a powerful earthquake rocked the region when news broke that the Los Angeles native was homeward bound.

The decision came just weeks after Leonard led the Toronto Raptors to the franchise's first title.

Leonard agreed a four-year, US$142-million maximum contract with the Clippers even though the Finals MVP could have made more money by staying in Canada.

He was, by all accounts, also able to convince the Clippers to sign fellow Southern California native George, of the Oklahoma City Thunder, to the team, instantly making the Clippers, who have long played second fiddle to the glamorous Lakers, early title favorites.

The three will join forces with LeBron James on a Lakers team that will barely resemble last season's squad, which failed to meet expectations in the three-time NBA champion's first season in the purple and gold.

The Lakers have 16 championships to their name, the most recent coming in 2010, while the Clippers are seeking their first NBA title.

The two teams share the Staples Center in downtown Los Angeles and their meetings next season will be among the most hotly anticipated games on the NBA calendar, Magic Johnson said on Saturday.

"LA has just become the king of basketball," the Lakers great said in a tweet.

"It's going to be awesome to watch NBA basketball in LA this season!"

Los Angeles' gain was the San Francisco Bay Area's loss as the Warriors, winners of three of the last five NBA titles, will take a heavy hit after the departure of Kevin Durant this offseason and a Finals injury to Klay Thompson.

The New York Knicks were perhaps the biggest losers in free agency, though, after the team's management, which had said to expect big moves, whiffed on signing Durant and he instead went to the Brooklyn Nets along with Kyrie Irving (from the Boston Celtics).

Due to a torn Achilles, the Nets are expected to be without Durant next season.

In the meantime, the spotlight will be firmly aimed at Hollywood when the NBA's 2019-2020 season tips off on October 22. 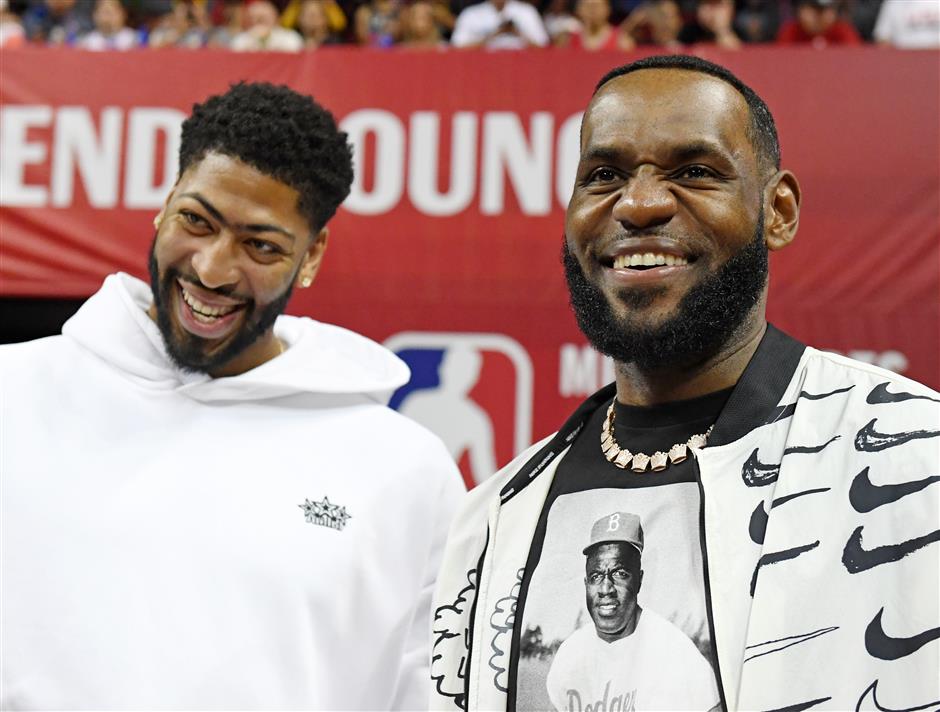 Anthony Davis (left) and LeBron James of the Los Angeles Lakers arrive for a game between the Lakers and the Los Angeles Clippers during the 2019 NBA Summer League at the Thomas & Mack Center in Las Vegas, Nevada, on Saturday.