Kawhi Leonard and Paul George laughed and cheered along with the crowd when the multibillionaire owner of the Los Angeles Clippers waved his arms, stomped his feet and screamed his new players' praises in a cracking voice.

Leonard and George are already loving the Clippers' unique vibe, and they see their future together as limitless.

Nearly three weeks after these native Southern California superstars shook up the National Basketball Association by maneuvering to play together in LA, the Clippers' new dynamic duo finally made its first public appearance on Wednesday in a south Los Angeles community center gym.

"I think we've got something special," said Leonard, the two-time NBA Finals MVP coming off a championship season in Toronto. "We can make history here. We've got the right team to do it."

In explaining their decision to team up with the Clippers, Leonard and George both mentioned the importance of playing near their friends and family. Both were eager to join a team they grew up watching intently from their hometowns in the far-flung LA suburbs during the Clippers' leaner years.

But Leonard and George seemed to be most impressed by this steady, cerebral franchise's supporting cast and leadership — everyone from complementary players Patrick Beverley and Lou Williams to front-office architect Jerry West and coach Doc Rivers.

West and Ballmer structured their entire franchise specifically to attract elite talent this summer, and Leonard sees the Clippers as fertile ground to grow another champion quickly.

While Leonard joined the Clippers as a free agent, George got here through a trade with Oklahoma City. The All-NBA first-teamer described his departure from the Thunder as "a mutual thing between the both of us that the time was up" in Oklahoma City. 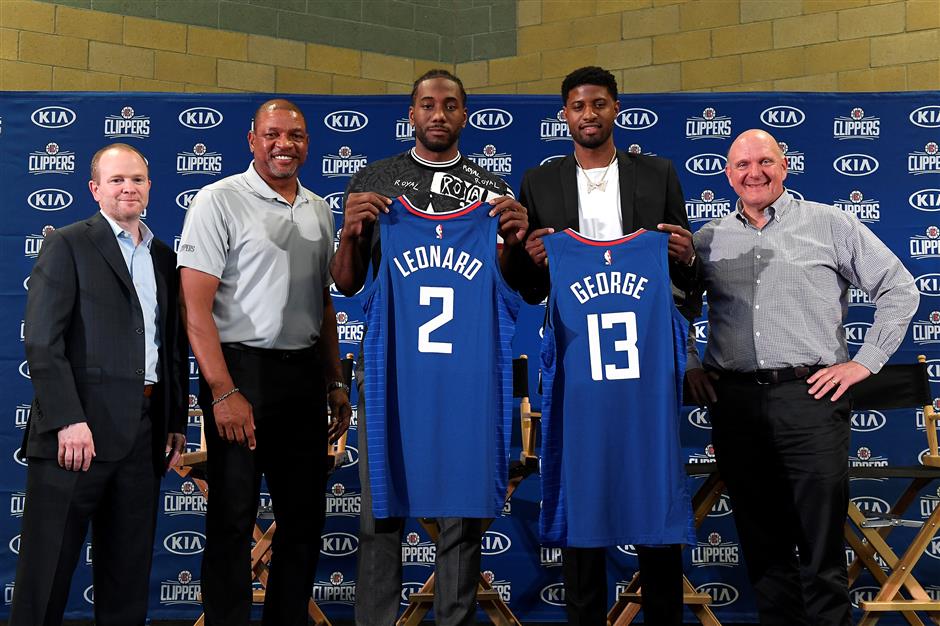 From left: President of Basketball Operations Lawrence Frank, head coach Doc Rivers, Paul George, Kawhi Leonard and owner Steve Ballmer of the Los Angeles Clippers pose during the introduction of Leonard and George as the new players of the NBA franchise at a press conference in Los Angeles on Wednesday.

Both Leonard and George mentioned the fact that they nearly played together with the Indiana Pacers, who drafted George in 2010 and Leonard in 2011 — only to trade Kawhi to San Antonio on draft night.

"I wish we would have stayed together," George said. "It just seems like this was destiny. We were supposed to play together, so here we are."

The Clippers' long-standing reputation as a miserable franchise has receded annually during their current run of eight consecutive winning seasons. The Donald Sterling era's flaws have been wholly erased since Ballmer bought the team seven years ago and trusted Rivers and West to run it.

For all of their recent success with the likes of Chris Paul, Blake Griffin and Tobias Harris, the Clippers still haven't reached a Western Conference final or stolen much of the local spotlight from the 16-time champion Lakers.

But this summer, their patient planning allowed them to acquire two men who appear capable of leading them into the NBA's elite.

Both Leonard and George were heavily linked with the Lakers in recent years, but Leonard spurned the Lakers' earnest attempts to team him with LeBron James and Anthony Davis next season. While Leonard didn't criticize the Lakers, he praised the Clippers' front office for being "very transparent with me".

Leonard and George both know Los Angeles well enough to know the Clippers won't come close to matching the Lakers' formidable fan base until they've got a few banners of their own at Staples Center — and the superstars say they don't care.

"As far as the last few years, as far as a basketball standpoint, the Clippers have been better," Leonard said to cheers.

George was more succinct about his thoughts on the Clippers' place in Los Angeles in the years ahead.