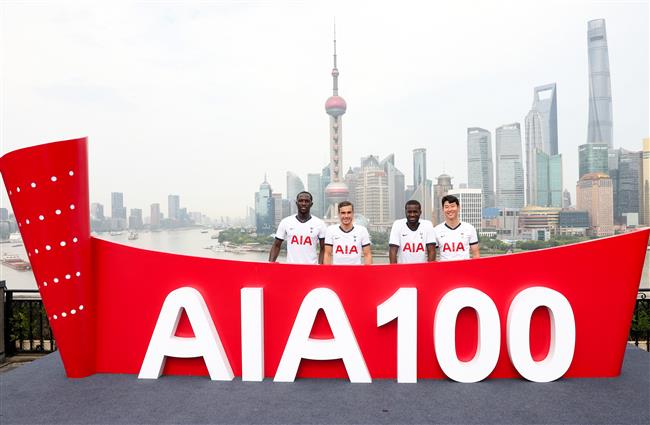 Tottenham Hotspur players (from left) Moussa Sissoko, Harry Winks, Tanguy Ndombele and Son Heung-min pose at the Bund for club sponsor AIA, which started a century ago in Shanghai.

English Premier League side Tottemham Hotspur is working on a global growth including the construction of the largest capacity football club stadium in London after an expansion of partnership with major sponsor AIA Group Limited.

The club made its maiden visit to Shanghai this week for an International Champions Cup match against league Manchester United at Hongkou Football Stadium, which they lost 1-2. It also announced in Shanghai that AIA will continue to be the club’s global principal partner till the end of the 2026-27 season.

“The club has been on a rise with promising prospective,” said Daniel Levy, Tottenham Hotspur’s executive chairman. “We are reaching out to more fans around the world as we want to become a global brand just like AIA. The expansion of the partnership will help the club grow and improve, not just commercial-wise, but also in club management and facility investment.”

Based in North London, Tottemham Hotspur recently reached the final of the UEFA Champions League for the first time after having already secured qualification for Europe’s elite competition for a fourth year in a row.

According to Levy, the club’s growth plan includes a new Tottenham Hotspur Stadium in London with a capacity of 62,062. With the largest single-tier stand in the country and a tight stadium bowl configuration, the venue was designed from the outset for multi-use, including a structurally engineered fully retractable pitch.

The stadium will be a home for the NFL in London with a 10-year agreement to stage a minimum of two matches a season.

The club’s cooperation with AIA also benefits young footballers in Hong Kong. Three resident coaches from Tottenham Hotspur have been providing clinic courses to local youngsters, having over 40,000 participants involved.