Federer loses cool and follows Djokovic out of Shanghai 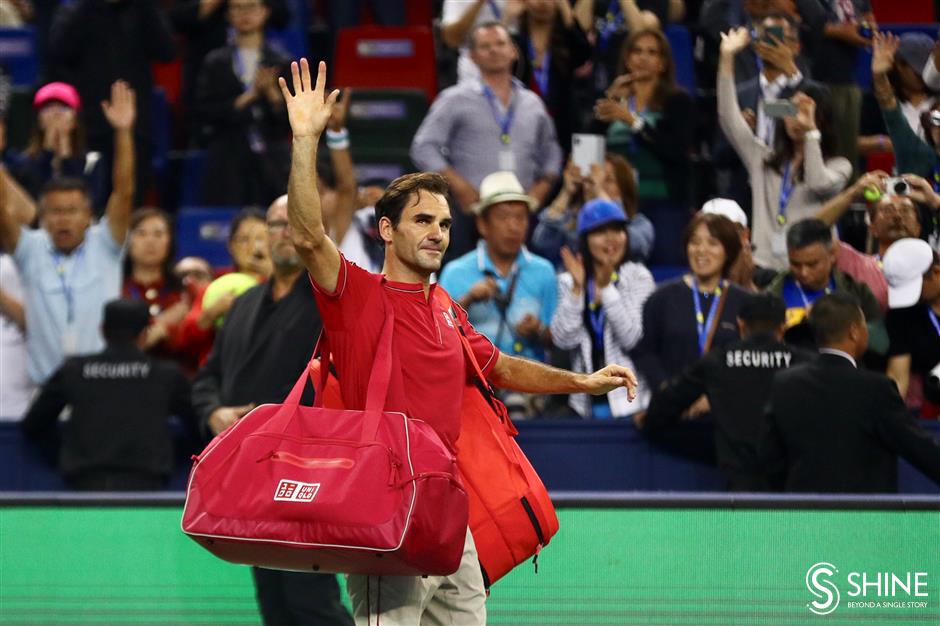 Roger Federer of Switzerland waves to the public after losing against Alexander Zverev of Germany during their men's singles quarter-final match at the Shanghai Masters tennis tournament in Shanghai on October 11, 2019.

Roger Federer's trademark cool spectacularly deserted him and he was given a point penalty as he followed Novak Djokovic out of the Shanghai Masters quarter-finals on Friday.

Alexander Zverev defeated the usually unflappable Swiss 6-3, 6-7 (7/9), 6-3 in a dramatic match that saw Federer twice hit the ball out of the court in anger and row with the umpire.

The sixth-ranked Zverev, 22, faces Matteo Berrettini in the semi-finals on Saturday after the Italian defeated Austria's Dominic Thiem in straight sets.

Former number one Federer evaded questions about the umpire afterwards, shrugging his shoulders and firing back at one reporter: "So you can write something on Twitter, yeah?

The 20-time Grand Slam champion saved five match points to force a deciding set, but he then became engaged in a continual war of words with the chair umpire.

His point deduction came at 3-0 and 30-15 down in the third set, as the 38-year-old threatened to unravel and he pinged another ball towards the crowd.

Federer said that he "played alright", but was effusive about the rise of Zverev, Daniil Medvedev and Stefanos Tsitsipas, all in the semi-finals in Shanghai.

"The young guys are knocking on the door big time, it's exciting, it's great," he said.

Zverev has 11 career titles, but only one arrived this year.

"It was a match to turn my year round a little bit," he said, adding that he thought Federer played better when he was riled.

Tsitsipas said that he scares the "Big Three" after the young Greek stunned world number one Djokovic in their quarter-final.

The 21-year-old has now defeated Djokovic, Federer and Rafael Nadal this year to burnish his fast-growing reputation.

On Saturday though he faces the red-hot 23-year-old Medvedev -- who he has never beaten.

Calling it the best comeback of his nascent career, the seventh-ranked Tsitsipas said he had dreamt of beating the "Big Three".

But rather than being intimidated by them, Tsitsipas said: "I honestly feel like they are more threatened than I am and that makes me more relaxed on court.

"I know I just have to hang in there and be able to be more aggressive.

"Once you get aggressive and they see you going for it, I might even say they get scared."

It was a double celebration for Tsitsipas, who also confirmed his place in the prestigious season-ending ATP Finals.

Tsitsipas sealed the deal with a gleeful smash and held both arms aloft. Djokovic met his opponent with a warm embrace at the net.

Djokovic, who had looked imperious up until now, had no complaints.

Asked if Tsitsipas has the potential to be number one, the 32-year-old Serbian replied: "He definitely has, yes."

Djokovic says that he is fully recovered from a shoulder injury and he did not drop a set in winning the title in Tokyo last week.

He had carried that ominous form into Shanghai and threatened to blow Tsitsipas away in the first set.

But Tsitsipas found his feet in the second set, then went 3-1 up in the decider when Djokovic planted a forehand wide on the third break point.

US Open finalist Medvedev has beaten Tsitsipas in all their four matches, but he said: "They were all really tight. He's improving also every week.

"He's still so young. He has even, let's say, two years of more improving than me, talking about age."

Nadal was not in action in Shanghai because of a wrist injury.