Medvedev captures 4th title of the year in Shanghai 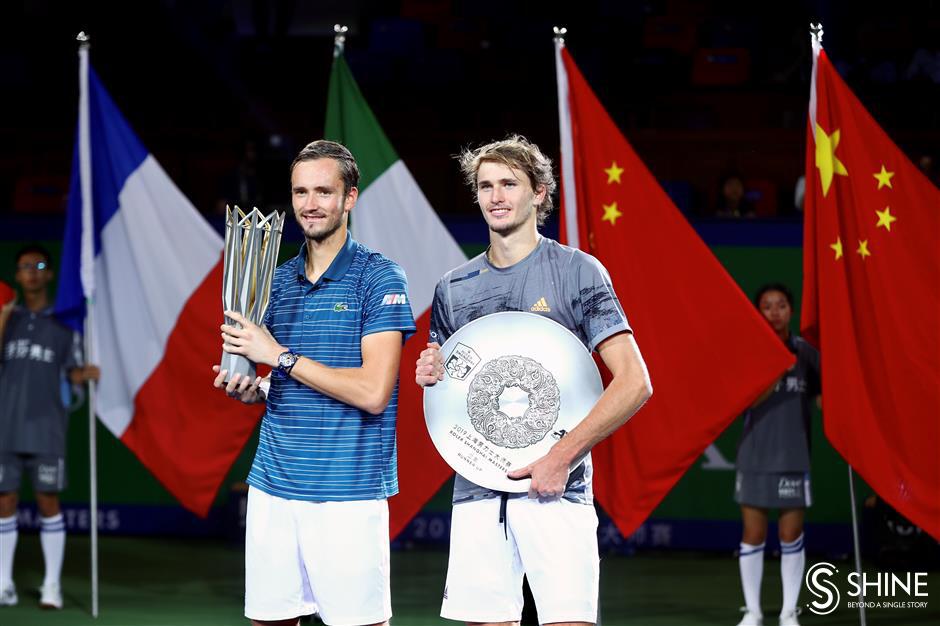 Winner Daniil Medvedev (left) and runner-up Alexander Zverev of Germany pose after the Rolex Shanghai Masters final at the Qizhong Tennis Center in suburban Minhang District on Sunday. The third-seeded Russian won 6-4, 6-1 for his fourth title of the year.

Daniil Medvedev extended the form that made him the hottest player in men's tennis when he captured the Rolex Shanghai Masters title with a 6-4, 6-1 win over Alexander Zverev on Sunday.

The third-seeded Medvedev picked up his third title in six consecutive finals played since the tour returned to hardcourts after Wimbledon in July. He also won the Masters 1000-level tournament in Cincinnati and the St Petersburg trophy in that stretch.

Last month, Medvedev also made it to his first Grand Slam final at the US Open where he challenged Rafael Nadal through five sets before the Spaniard secured his career 19th Grand Slam trophy.

"It's something outrageous what I've done in the last few months," Medvedev said on the court after his win. "I wouldn't have believed it."

The 23-year-old Medvedev is currently 29-3 in matches played in the past six tournaments.

Medvedev and the 22-year-old Zverev are the youngest finalists at an ATP Masters 1000 event since a 22-year-old Novak Djokovic defeated a 23-year-old Gael Monfils at the 2009 Paris tournament.

The fifth-seeded Zverev had won all four of his previous encounters against Medvedev, but all of those matches were played prior to this year, which has seen the Russian become nearly invincible of late.

"As I said yesterday you're probably the best player in the world right now and it's unbelievable," Zverev said to Medvedev during the on-court ceremony. "All the best to you."

Zverev presented Medvedev with two gifts — back-to-back double faults at 30-30 in the 10th game — to enable the Russian to secure the first set 6-4.

Earlier in the first set, Medvedev led 3-0, but Zverev was able to recoup that first service break on a fifth break point on the Russian's serve in the fifth game.

Clearly the two double faults shook any confidence Zverev might have had in the match. He quickly fell behind 5-0 before the German won his lone game in the second set.

The Russian served out the 73-minute match with an ace to capture his first career victory over Zverev.

"I think the stadium was full today and you guys are amazing support, starting from my first match," Medvedev told the crowd at the Qizhong Tennis Center in suburban Minhang District.

"You gave me good energy to win this tournament. Thank you very much, Shanghai will always be a special place in my heart."

The next generation has stamped its authority on Shanghai with Djokovic and fan favorite Roger Federer — beaten by Zverev — both going out in the quarterfinals.

Nadal failed to play because of a wrist injury.