Nadal returns to No. 1 despite Djokovic's Paris win 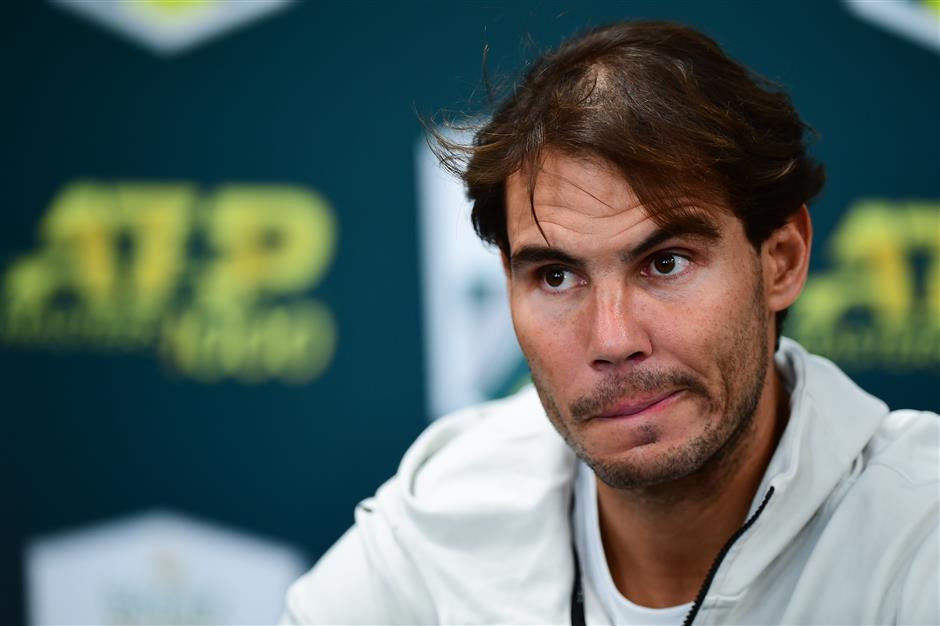 Spain's Rafael Nadal addresses a press conference to announce his withdrawal from the semifinals of the Rolex Paris Masters in Paris on Saturday.

Rafael Nadal's return to the world No. 1 position for the eighth time in his career was confirmed when the ATP rankings were released on Monday.

The Spaniard leapfrogs Novak Djokovic even though the Serb sealed his fifth Paris Masters title on Sunday with a 6-3, 6-4 victory over Canadian Denis Shapovalov.

Nadal, whose last stint at the top ended a year ago on November 4, 2018, withdrew from his semifinal against Shapovalov in Paris with an abdominal muscle strain.

Djokovic slips down the rankings because he loses the points that he won a year ago in London when Nadal was absent.

The 2019 battle between Nadal, winner of the French and US Opens, and Djokovic, who triumphed in Australia and at Wimbledon, is set to go to the wire as either could still finish the year at No. 1.

If the Spaniard does not play or fails to win a round-robin match at the World Tour Finals, Djokovic must claim two group-stage victories and make the final to pass him.

Djokovic would also be sure of the year-end top ranking should he win the tournament and Nadal does not reach the semis.

Frenchman Gael Monfils returns to the top 10 for the first time since February 2017 after reaching the semifinals in Paris while 20-year-old Shapovalov climbs 13 places to a career-high 15.

Meanwhile, Ashleigh Barty of Australia tops the end-of-season women's rankings released on Monday, a day after her triumph in the WTA Finals in Shenzhen, south China's Guangdong Province.

With 7,851 points, Barty, who has topped the rankings since early September, eclipsed second-placed Czech Karolina Pliskova (5,940 points) by almost 2,000 points.

Japan's Naomi Osaka (5,497) held on to third place from Simona Halep, the Romanian moving up one spot to fourth on 5.462 points.

Barty dominated Elina Svitolina in Sunday's final in Shenzhen, winning 6-4, 6-3 to collect the richest prize in women's tennis of US$4.4 million.

Ukraine's Svitolina rose two places to sixth in the rankings while Kiki Bertens of the Netherlands moved up one to ninth at the expense of American Serena Williams, who slipped to 10th spot.