France emerged teary-eyed and triumphant from a weekend of grit and inspiration to claim its first Fed Cup title in 16 years with a 3-2 win on Sunday over host Australia.

Kristina Mladenovic and Caroline Garcia combined for the decisive point, grinding down Ashleigh Barty and Samantha Stosur 6-4, 6-3 in the doubles to seal France's third title in the team event and leave a heaving crowd of 13,842 at Perth Arena deflated.

Edged out 2-3 on home soil by the Czech Republic in the 2016 decider, Mladenovic and Garcia were resolved to avoid a repeat of that heartbreak, and they played fearlessly on the blue hardcourt.

"It's lots of emotions to share this with Caroline after three years ago (when) we failed on the last step of the tie," Mladenovic said courtside.

"Today we just wanted to take this little re-match for ourselves. It's just not describable how we feel."

Mladenovic was key to France's triumph, unbeaten in her three rubbers and having come back from a set down to stun world No. 1 Barty in the reverse singles earlier in the day.

Paired with the French No. 1, Garcia put her 0-6, 0-6 humiliation by Barty in the Saturday singles behind her and proved a menace for Australia throughout the doubles decider.

"I'm not sure if I'm completely relaxed because it was a crazy weekend for everyone," she said.

"We played a great match and it was very tense.

"Of course it's a lot of stress but I think we managed it very well."

She and Mladenovic rallied from an early break down in the first set and saved a slew of break points in the second as the desperate Australians battled to stave off defeat.

Australia saved two championship points at 5-2 in the second set but Mladenovic capped her superb weekend by serving out the match.

The pair embraced each other on the floor after the winning point and their teammates piled on top of them as a rowdy pocket of blue-clad French fans roared their approval from the terraces. 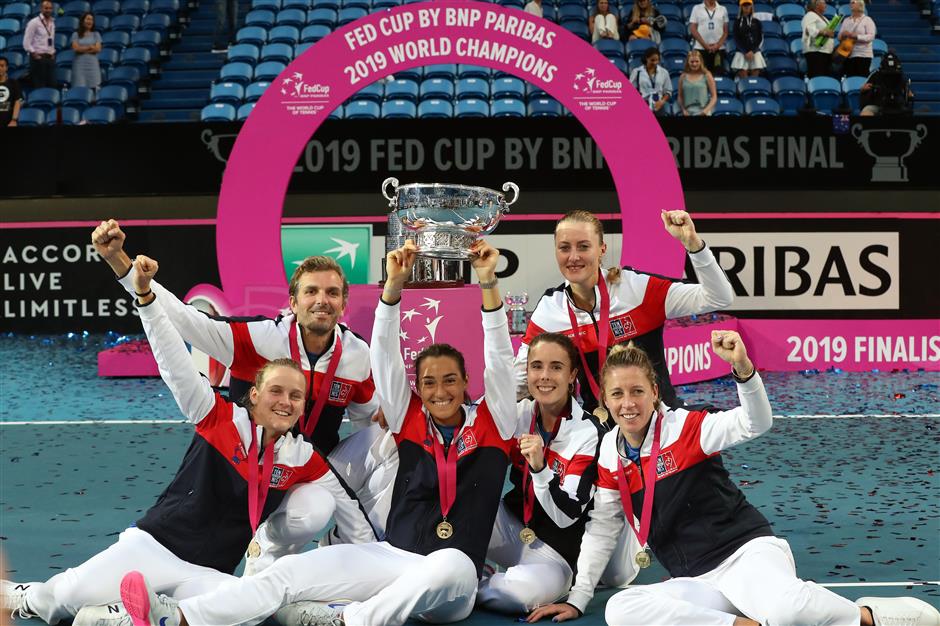 "I'm the proudest man on the planet right now, so proud of my girls on the team," the 37-year-old said on court.

"They deserve it because they fought for a long time for this title.

Australia had been chasing its eighth Fed Cup title and first in 45 years but has now lost its last nine finals in the event, including six in succession from 1975-80.

It snapped Barty's run of 15 successive wins in Fed Cup rubbers and hushed the sunbathed crowd.

A month after becoming eligible to represent Australia, Croatia-born Tomljanovic rewarded captain Alicia Molik's faith with a gutsy 6-4, 7-5 win over veteran Pauline Parmentier to level the tie at 2-2.

It briefly revived the home fans' hopes but there was still a mountain to climb against Garcia and Mladenovic.

Australia's long-serving Stosur, surprisingly overlooked for the singles despite her outstanding Fed Cup record, came into the decider cold. She duly struggled with the heat of Garcia and Mladenovic's shot-making.

Yet even the most battle-ready pairing might have fallen short against the French, who played flawlessly to ensure their march to the victory podium.