Garbine Muguruza won consecutive matches for the first time since last year's French Open when she beat American Shelby Rogers 6-1, 7-6 (2) to advance to the quarterfinals of the Shenzhen Open on Wednesday.

The sixth seeded Spaniard, a two-time Grand Slam winner, fired 10 aces and won 80 percent of her first serve points to advance in 83 minutes.

"I think she started to play better and the match was more equal," Muguruza said. "I was happy that at the end in the tiebreak, it was 50-50, and that I could win the match.

"Every match is very important and it's great to start the year here and get as many matches as possible. Every tournament is a challenge and I'm happy to keep playing."

Blinkova had upset top seed Belinda Bencic on Tuesday and despite breaking Diyas five times, she dropped serve nine times herself and made 11 double faults which proved decisive.

Fifth seed Ekaterina Alexandrova of Russia extended her winning streak to seven matches when she got the better of China's Peng Shuai, a former finalist, with a 7-6 (7), 6-1 victory.

The home fans did have reason to cheer, however, when fourth seed Wang Qiang overcame Belarusian Aliaksandra Sasnovich, recording a 6-4, 0-6, 7-6 (5) victory. Wang will take on Alexandrova next.

In Auckland, New Zealand, wildcard Eugenie Bouchard showed she may have turned a corner as she attempts to resurrect her career with victory over eighth seed Caroline Garcia, while Alize Cornet beat world No. 15 Petra Martic at the Auckland Classic on Wednesday.

Former world No. 1 singles players Serena Williams and Caroline Wozniacki also breezed into the semifinals of the doubles after they thumped top seeds Caroline Dolehide and Johanna Larsson 6-2, 6-1 in just 52 minutes.

Wozniacki and Williams, who are good friends off the court, have teamed up to play as a doubles pairing for the first time before the Dane retires after the Australian Open.

"Multiple times I was thinking 'wow'," Wozniacki said of the power strokes from Williams that blew the American/Swedish duo off court.

"I just wanted to win today. I'm happy for my second doubles victory in 10 years," the Dane added while laughing.

Both will play their second-round singles matches on Thursday.

Bouchard, a former top-five player who made the Wimbledon final and semifinals at the Australian Open and Roland Garros in 2014, has slumped to 262 in the rankings and is attempting to resurrect her career. 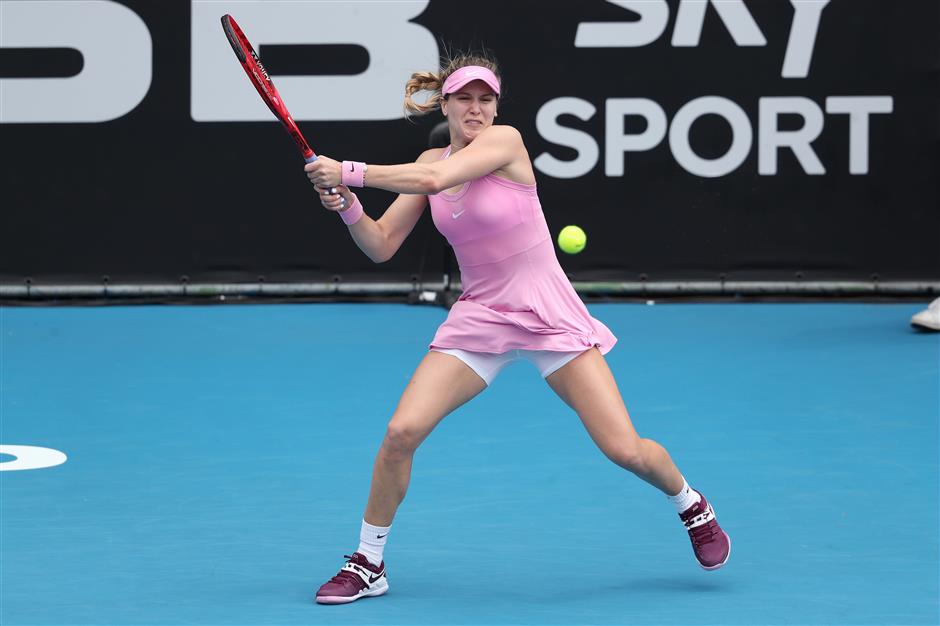 Eugenie Bouchard hits a return against Caroline Garcia of France during their second-round match at the Auckland Classic in Auckland, New Zealand, on Wednesday. The Canadian won 6-4, 6-4.

The 25-year-old Canadian battled for every point in her 6-4, 6-4 second-round victory against the Frenchwoman, who is mired in her own form slump having failed to advance past the second round of her previous 12 tournaments.

France's Cornet also provided something of an upset when she beat Croatian second seed Martic 3-6, 6-4, 6-4 in their second-round clash and sealed the win with her only three aces of the match in the final game after she had gone 0-30 down.

Cornet will meet Jessica Pegula in the quarterfinals after the American had a comfortable 6-2, 6-2 second-round win over Tamara Zidansek of Slovakia.

In Brisbane, Queensland, Americans Madison Keys, Alison Riske and Danielle Collins advanced to the quarterfinals of the Brisbane Open after all three recorded straight-sets victories in Wednesday's singles matches.

Riske became the first player to book her spot in the quarterfinals with a 6-3, 6-4 win over Barbora Strycova.

The 29-year-old American, who lost to Strycova in their previous two meetings, broke her Czech opponent five times in the 93-minute encounter to set up a potential clash with second seed Karolina Pliskova.

Eighth seed Keys was pushed in the first set by hometown favorite and former US Open champion Samantha Stosur but eventually prevailed 7-5, 6-3 in 78 minutes.

Keys fired 10 aces and 24 winners past the Australian wildcard to beat Stosur for the first time in four attempts and set up an all-American quarterfinal clash with Collins, who beat Kazakhstan's Yulia Putintseva 6-1, 6-0 in just 58 minutes.

Australian top seed and world No. 1 Ashleigh Barty, who received a bye into the last-16, plays her first match on Thursday against American qualifier Jennifer Brady while Czech Pliskova takes on another Australian Ajla Tomljanovic.