How can movements in skating and skiing be made more accurate? How can athletes train for winter sports in seasons without snow?

To help prepare well for the coming Beijing 2022 Winter Olympics and improve the training facilities of winter sports, China has been steadily implementing a national research and development project in recent years, some of which is led by Beijing Institute of Technology (BIT). The application of some high technologies have been helping athletes to be quicker and stronger on ice and snow. 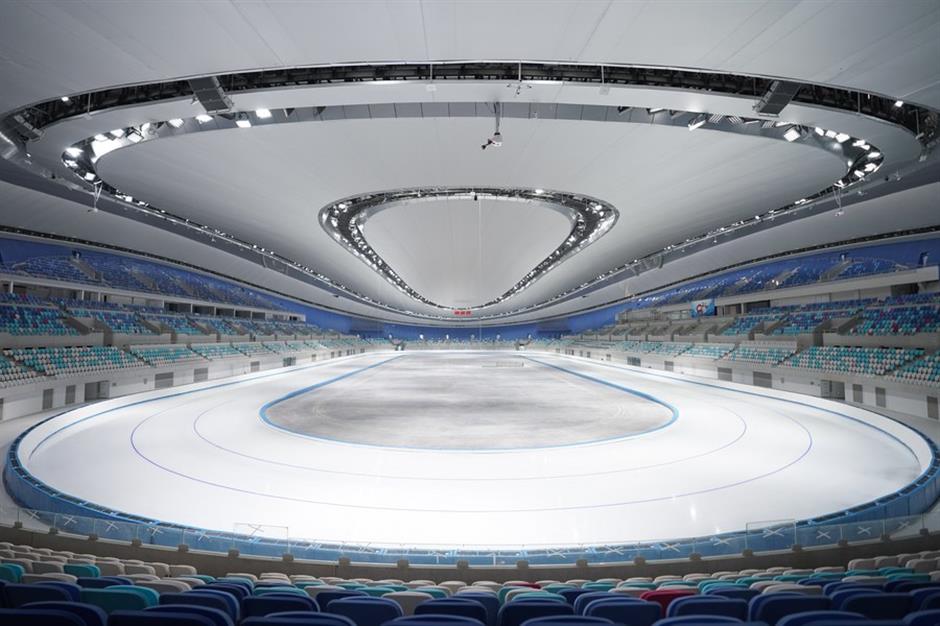 Photo taken on January 22, 2021 shows the interior view of the National Speed Skating Oval in Beijing, capital of China.

Inside a skating rink in Beijing, Associate Professor Liu Ming from BIT's School of Optics and Photonics has led his team to test the equipment for days. Through the image acquisition equipment and high performance cameras, the movements of skaters are collected and analyzed.

This project not only focuses on and analyzes the moving track of a single athlete, but can also analyse the movements of multiple athletes at once.

"Our system can record the moving process of athletes through continuous zoom tracking close-up and panoramic acquisition. Then we analyse the athlete's movement and trajectory, to reasonably control the movement process and help athletes and coaches train scientifically," said Liu.

The most distinguishing feature of this device is the application of pan tilt zoom technology to measure motion. Athletes do not need wearable devices. Even if the movement covers the whole area of the ice rink, the device can still accurately obtain its motion data.

The two panoramic cameras have a resolution of 25 megapixels per frame and a frame rate of 160 frames per second, which is suitable for multi-person motion trajectory analysis.

Liu said his team will improve and upgrade the system, increase the number of acquisition slots and the image resolution to make the results even more accurate. "We hope that our equipment and products can be used in the teaching and training of winter sports and even track and field events as soon as possible, to improve the performance of our athletes," he added, "This is our greatest glory!" 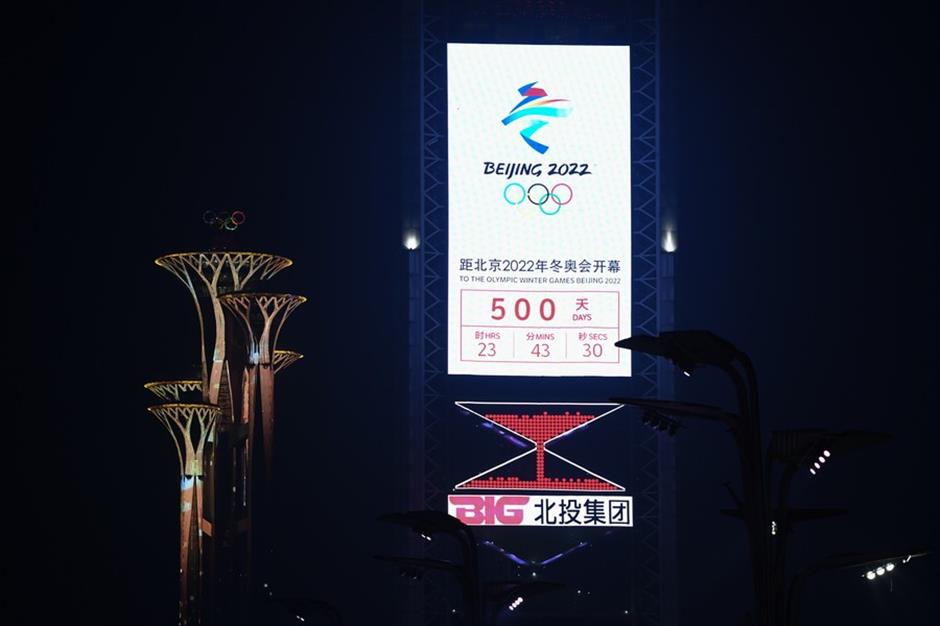 Photo taken on September 21, 2020 shows a countdown clock displaying 500 days to go until the start of the 2022 Beijing Winter Olympic Games in Beijing, capital of China.

At BIT's School of Optics and Photonics, associate professor Zhang Haiyang, in charge of the "3D Perception and Reconstruction Technology of Winter Scene" project, is presenting a simulated Olympic ski resort constructed by a 3D laser radar scanning system.

The project scans the Olympic ski resort and surrounding environment in 3D, obtaining a large amount of point cloud data, and then generates a 3D model.

The team can provide three-dimensional geometric data of the track for the indoor ski training simulation system, so that the relative movement of the athlete and the training platform conforms to the real sliding state. In addition, virtual scenes around the track can be provided to help athletes visually see the surrounding environment in real time.

"We measure the data of ski jumping, alpine skiing, cross-country skiing and biathlon venues, and then present the site's information using VR technology. With athletes' trajectory systemic data, we apply the presentation of simulated sites to indoor training," said Zhang.

In order to collect enough field data to simulate different environments, the research team visited several resorts in Beijing, as well as Hebei and Jilin provinces, to scan data and conduct tests with the UAV load laser radar scanning system.

According to researchers, this system had difficulty operating in temperatures of minus 20 degrees Celsius, forcing the team to use different types of UAVs suitable for low-temperature environments.

Besides, the team also developed athlete motion capture and trajectory tracking systems, which can capture the athletes' posture in real time, and also can track the position, acceleration, speed and other information of the athlete.

"Our system has already been used by the national team, which can help reduce injuries, improve athletes' training efficiency, and provide technological support for coaches," Zhang said. 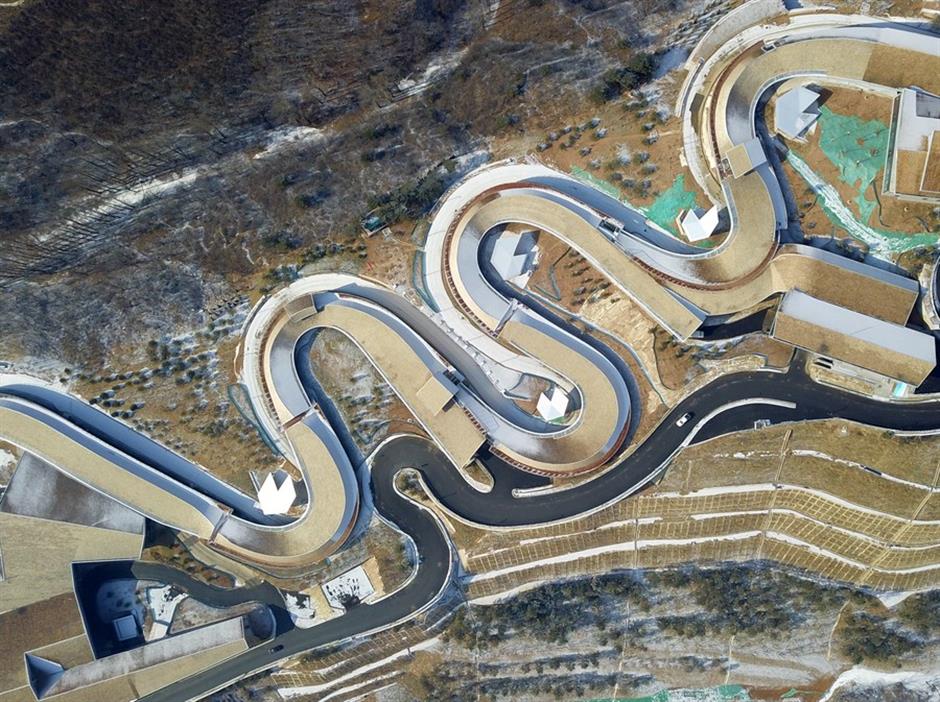 In a laboratory of BIT's School of Automation, Cao Hongqing puts on wearable sensors before stepping onto the simulated sleigh on the 12-meter-long steel sliding platform, and rapidly slides facing a skiing scene on the enormous electronic screen, to mark the launch of the "Indoor Multi-DOF Simulated Ski Training System".

As a member of the system's research team, the 24-year-old graduate previously trained for skiing just to personally test the functions of this indoor ski training device.

"We do mainly rotational motions on the sliding platform. It's exhausting to train on it, but can achieve the ski training goals through the similar experience of real trails," Cao said.

In the meantime, setting pattern recognition and posture measurement system on the ski training platform allows for acquisition and analysis of athletes' moving data, which can help guide scientific training.

Project chief Liu Xiangdong, who is also a professor of the School of Automation, explained that this set of equipment benefits athletes by allowing indoor ski training in all seasons. "The maximum skiing speed on the platform can reach around 100 km/h," he noted.

17 sensors on athletes' joints can also help measure their postures, which coaches can refer to for assessment. Athletes can also train from different angles through height, incline and deflection changes.

Some of this equipment has also been applied in the national team's training, according to Liu. "As the Beijing Winter Olympics is coming, I hope our research outcomes can contribute to athletes' training and help them to improve their performance in Olympics and win honors for China," Liu added.