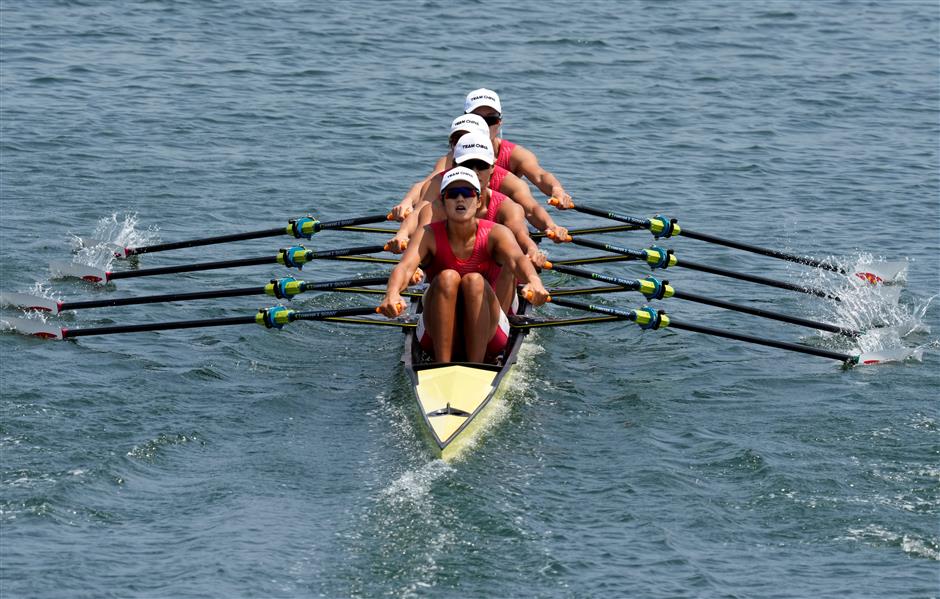 After a 13-year wait, China claimed its second Olympic gold medal in rowing when the women's quadruple sculls crew of Cui Xiaotong, Lyu Yang, Zhang Ling and Chen Yunxia paddled to victory in a commanding style at the Tokyo 2020 Games on Wednesday.

The reigning world champions led all the way to set a new world and Olympic best time at the finish line in six minutes 05.13 seconds, more than six seconds ahead of second-placed Poland. The bronze medal went to Australia in 6:12.08.

"We've had confidence since 2019 (at the World Championships). We've been racing all the other finalists. We've also been beating them, that's why we were confident going into the race," said Lyu Yang.

China's first ever Olympic rowing gold came in the Beijing 2008 Games. China also won in the women's quadruple sculls event. The Chinese took two bronze medals in rowing at the Rio Games in 2016.

China also won a bronze medal at the Sea Forest Waterway on Wednesday through Zhang Liang and Liu Zhiyu in the men's double sculls, the first men's medal for China and Asia in an Olympic rowing event.

"Our goal was actually a gold medal," said Liu. "Anyway, it's a big breakthrough for China. It proves that we have the ability to compete against European rowers."

The highly anticipated return of the women's four to the Olympic program set the standard of the day with Australia taking gold and a tight race with the Netherlands. Australia finished in a time of 6:15.37 setting a new Olympic best time by 13 seconds.

The last time the women's four was raced at the Olympics was in 1992. The Netherlands finished with silver and Ireland won bronze and made history with the first Irish Olympic rowing medal for women.

The men's four was won by Australia, followed by Romania and then Italy.

In the women's double, Romania led for the majority of the race with New Zealand getting the better of the Dutch in the final sprint. Romania's double of Ancuta Bodnar and Simona Radis, both 22 years old, took gold and set a new World Best Time of 6:41.03.

For the men's double the French duo of Boucheron and Androidas took the gold with the Netherlands in silver and reigning World Champions China holding on to bronze.

The Netherlands men's quadruple sculls crew of Uittenbogaard, Wiersma, Wieten and Metsemakers grabbed the gold in an Olympic best time of 5:32.03. A late surge by Britain gave them silver medals with Australia taking the bronze.