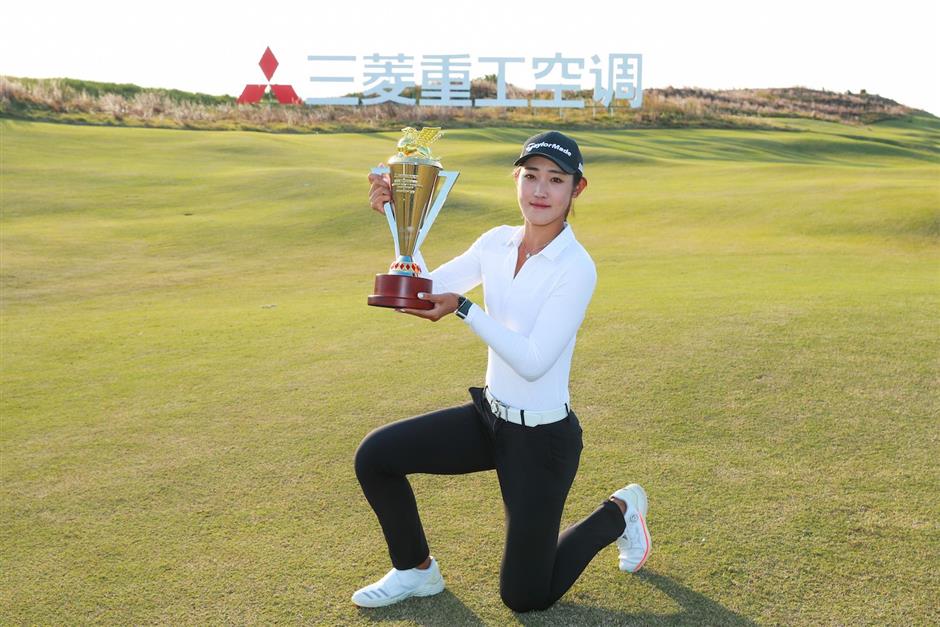 Liu Wenbo held off a determined Zeng Liqi to win the Mitsubishi Heavy Industries Championship in Shanghai on Sunday when the 20-year-old Beijing pro sank a 10-foot birdie putt on the first hole of a playoff as the 15-year-old amateur could not answer, missing a nine-foot putt to tie.

After starting the fourth round with a four-stroke lead, Liu, the China LPGA Order of Merit leader, could only close with a round of 71 and a 72-hole score of 8-under-par 280 at Lanhai International Golf Club.

With conditions relatively calm on Chongming Island, Zeng started her round with a bogey five at the first and then caught fire over the Yangtze Dune layout in carding six birdies and another bogey at the 300-yard 15th for a 67 to force sudden-death.

"It was a tough battle where my nerves were really tested. This was the hardest-earned win I have experienced, much harder than my first win on Tour as an amateur," said Liu.

"Last night I expected I could win if I had even-par today. But I knew this could happen because I played a lot of rounds with Zeng this year. She's a good putter, Today, she did a good job. I felt a little bit of despair when she kept making birdies around the turn."

Sui Xiang, the first-round leader, was a distant third at six shots back following a 71, a shot ahead of Shi Yuli (71) who posted her best finish as a pro. Zhang Yue (68) was fifth at eight strokes off the pace, two strokes ahead of evergreen Pan Yanhong (67), winner of last week's Guowei Centre Plaza Zhuhai Challenge.

For her third CLPGA Tour title, her second as a pro, Liu earned 200,000 yuan (US$31,220). The money, which solidified her position atop the Order, however, did not come without a fight from Jiangxi native Zeng. 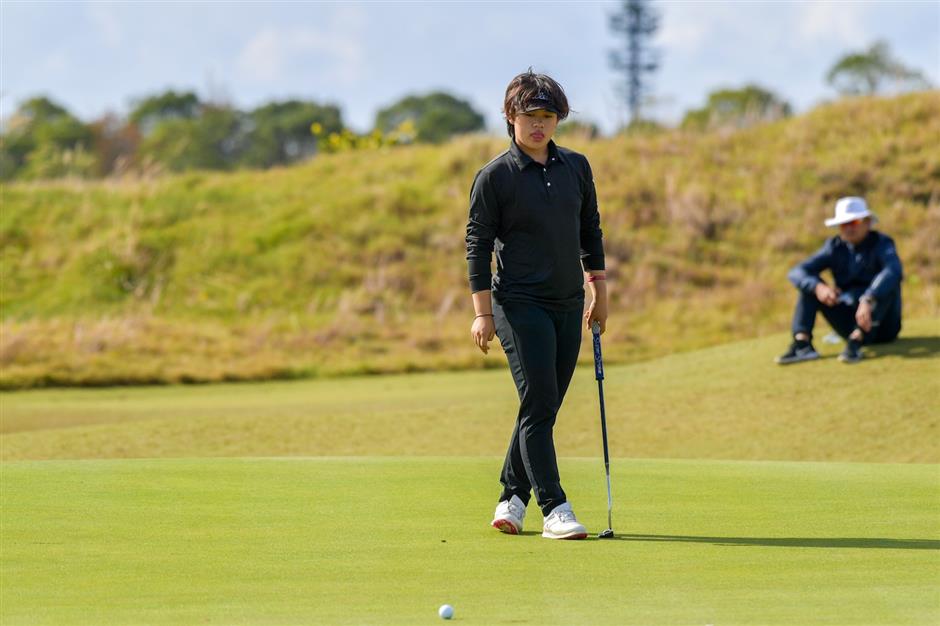 Amateur Zeng Liqi watches her ball during the fourth and final round of the Mitsubishi Heavy Industries Championship in Shanghai on Sunday.

As Liu dropped shots at the fourth and seventh holes at make the turn at 2-over 38, Zeng got on a roll in making four straight birdies from the eighth hole to get to 6-under through 11 holes for a one-stroke lead.

After both players birdied the 13th hole – Zeng made a tricky 33-footer with many breaks – followed by pars at the par-3 14th, the 15th hole proved a turning point; Liu made a birdie three while Zeng made a bogey five after hitting over the green for a two-shot swing and a one-stroke advantage for Liu.

It was a short-lived lead as Zeng, 79th in the World Amateur Golf Ranking, made a 20-foot putt for birdie from off the green at the next as Liu made par. Both players made a birdie four at the 17th and a par at the last to finish deadlocked.

"The turning point was the 15th hole where I made a birdie and regained the top spot. At that time my fire was re-kindled," said Liu. "I felt it's my time to win. Too many top-threes are not a good thing. I did it. Hopefully I can keep this momentum until the end of this season."

Zeng, who posted her fifth top-10 finish against pro fields this year, said her performance today was beyond expectation. The Nanchang native, however, left the course regretting her bogey five at the 15th hole.

"It's a short par-4 where you can easily make a birdie. For the past two days I just left myself less than 50 yards on my approach shots, but I made a bogey each day. My short game needs to be better," said the teenager.