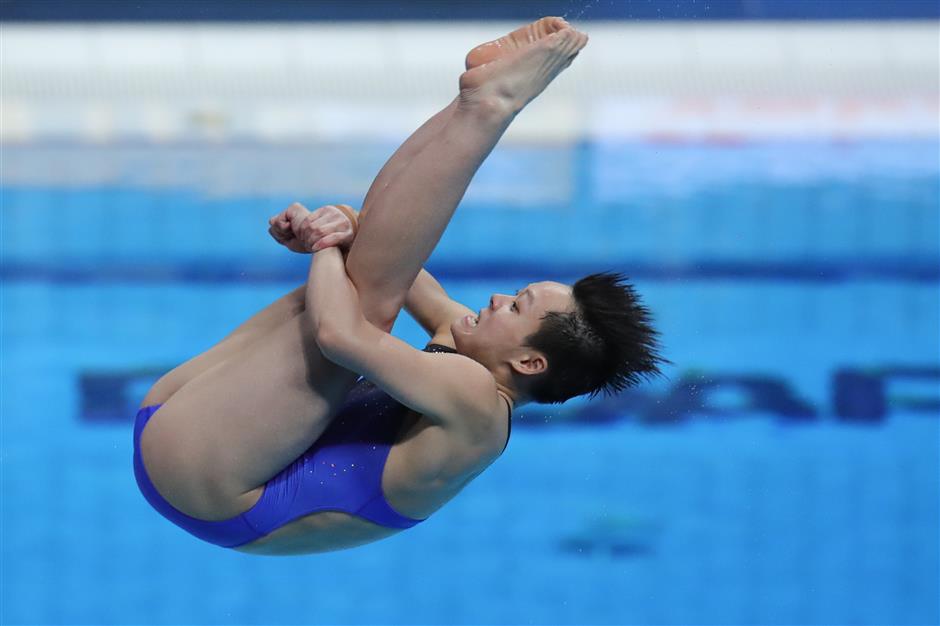 It was another winning day for the Chinese diving team at the FINA world championships as Chen Yiwen sailed to the women's 3m springboard gold on Saturday.

The 23-year-old led throughout the final, hitting 366.90 points to win the 11th diving gold for China at the worlds.

"It was the penultimate day of the tournament, and all of my teammates had won the golds in the previous events, so it gave me some pressure going into the final today," said Chen, who won her first worlds gold in 1m springboard three years ago in Gwangju, South Korea.

Another Chinese diver Chang Yani moved up from fifth place to win the bronze with a flawless last dive which earned her 72 points and a total of 325.85 from five rounds. Canada's Mia Vallee took the silver with 329 points.

"I'm not satisfied with my performance today, it was not the normal level of my dives. I was so nervous in the competition and I should improve my mentality when facing such big tournaments," said the 20-year-old. "In the second and fourth rounds, I made some errors."

The Hungarian team played nervously and made too many errors for a final, but the 6,000 mostly Hungarian fans at the Hajos swimming arena did not seem to mind and cheered the silver medalists as real heroes.

In the bronze game, the Dutch women beat their Italian opponents 7-5.

Sunday will be the last day of the Budapest swimming worlds. The event will bid farewell with two finals in diving: the women's 3m springboard synchronized and the men's 10m platform. Also on Sunday, Italy will meet Spain in the men's water polo final.