Allister, Alvarez give Argentina win over Poland in Group C 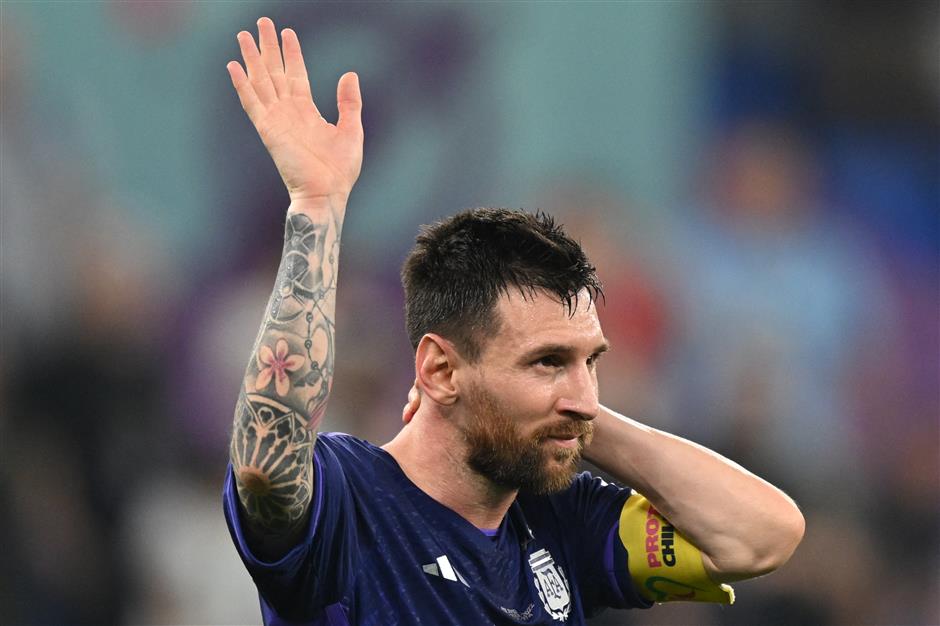 Argentina's forward Lionel Messi waves to supporters after his team won the Qatar 2022 World Cup Group C football match between Poland and Argentina at Stadium 974 in Doha on November 30, 2022.

Second-half goals from Alexis Mac Allister and Julian Alvarez gave Argentina a 2-0 win over Poland on Wednesday, which saw them finish top of Group C and book a last-16 meeting with Australia at the FIFA World Cup in Qatar.

Poland also qualified for the last 16 thanks to Saudi Arabia's late goal against Mexico in the other game, and they also celebrated on the pitch at the final whistle.

Lionel Messi saw a first-half penalty saved by the Polish keeper Wojciech Szczesny, but it didn't matter as the changes Argentina coach Lionel Scaloni made to his starting line-up made all the difference.

Scaloni brought in young forward Alvarez and midfielder Enzo Fernandez into the team, with Alvarez scoring the second of the night and Fernandez giving Argentina control of midfield, while also moving the ball much more effectively than the dropped Guido Rodriguez.

Robert Lewandowski led the Poland line, but was left isolated in attack as Poland produced virtually nothing in attack all game.

With Fernandez directing Argentina's midfield, Poland quickly sat deep and Argentina were quickly in control, with Messi forcing a smart save from Szczesny in the 10th minute.

Messi twice found left back Marcos Acuna in space as he opened up the pitch, but Acuna's delivery was wasteful and Angel Di Maria soon joined him on the wing.

Alvarez began to find space and saw one effort blocked, with Acuna drilling wide, while Szczesny pulled off another good save to deny the striker.

He then tipped over a Di Maria corner and again denied Alvarez, but as the ball was looped back in and the keeper looked to palm it clear, he made light contact with Messi as he fell. After checking the VAR, the referee awarded Argentina a penalty, which seemed generous to say the least.

Messi hit it hard to Szczesny's left, but at a savable height and the keeper pulled off a great save to keep it 0-0.

Poland coach Czeslaw Michniewicz made a double change at the break with midfielders Jakub Kaminski and Michal Skoras on for Przemyslaw Frankowski and Karol Swiderski, but within a minute of the restart Argentina took the lead.

Nobody picked up Allister and his scuffed right foot shot from Nahuel Molina's crept across the helpless Szczesny and in at the far post.

With the group so tightly balanced, Argentina kept up the pressure, before Alvarez made it 2-0 with a decisive finish after linking with Fernandez.

The result left Poland's qualification hanging by a threat and had Lautaro Martinez scored in the 85th minute when he was through on goal, they would have been going home. Szczesny made another fine save in injury time.