Snow flakes are spotted in Shanghai's Songjiang District on Wednesday.

Shanghai was hit by the most severe cold wave this year on Wednesday, with many commuters experiencing a flurry of snow in the morning – the city's first snow this year.

The highest temperature dropped to about 6 degrees Celsius on Wednesday after taking a 14-degree plunge in the past 48 hours.

However, as the temperature close to the ground was not below zero degrees, the snowflakes melted before touching the floor.

Snowfall was notable in the northern and western parts of the city.

Staff members in Shanghai Tower recorded the flying snowflakes from the world-second tallest building in the morning.

The temperature that the benchmark Xujiahui weather station recorded during Wednesday's daytime ranged between 3 and 5 degrees, according to the weather authorities.

Despite a temporary end to the rainfall in the morning, the temperature in most districts stayed between 3 and 4 degrees, meteorologists added.

The rainfall and sleet are predicted stay in city through Thursday, and the high temperature will remain lower than 10 degrees, by around 7 degrees and lows around 3 degrees.

The mercury will rebound starting from Saturday and stay between 11 to 13 degrees till next week, it says.

The winter is not here yet as the official winter requires the average temperature remain lower than 10 degrees for five consecutive days, according to the authorities. 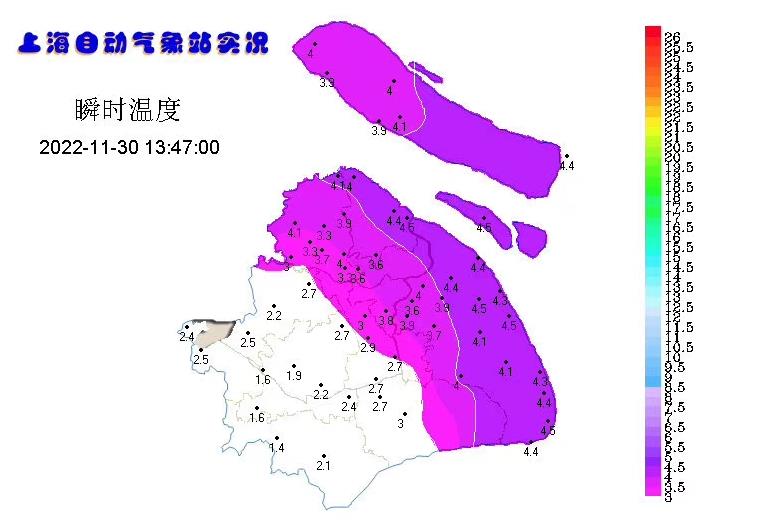 The mercury in most parts of the city remained below 4 degrees Celsius as of Wednesday afternoon.

A strong cold front hit Shanghai and neighboring provinces from Tuesday afternoon, with snowfall reported in Zhejiang and Jiangsu provinces as well.

The National Meteorological Center said temperatures are expected to plunge by 8 to 10 degrees in most parts of northeastern and northern China as well as some areas in other regions from Tuesday to Thursday morning.

It issued an orange alert, predicting big temperature drops, winds, sandstorms, rains and snow in vast regions of the country.

The mercury continued to fall through the day, with the temperature in suburban Songjiang, Jinshan and Fengxian districts dipping below 3 degrees due to gale, snow and rainfall, the city's meterological bureau added in the afternoon.

Roxanne Lu, who works in the downtown Bund area, said she had put on a turtleneck sweater to prepare for the cold wave.

"It seems we're suddenly hitting the coldest time of the year," she noted. 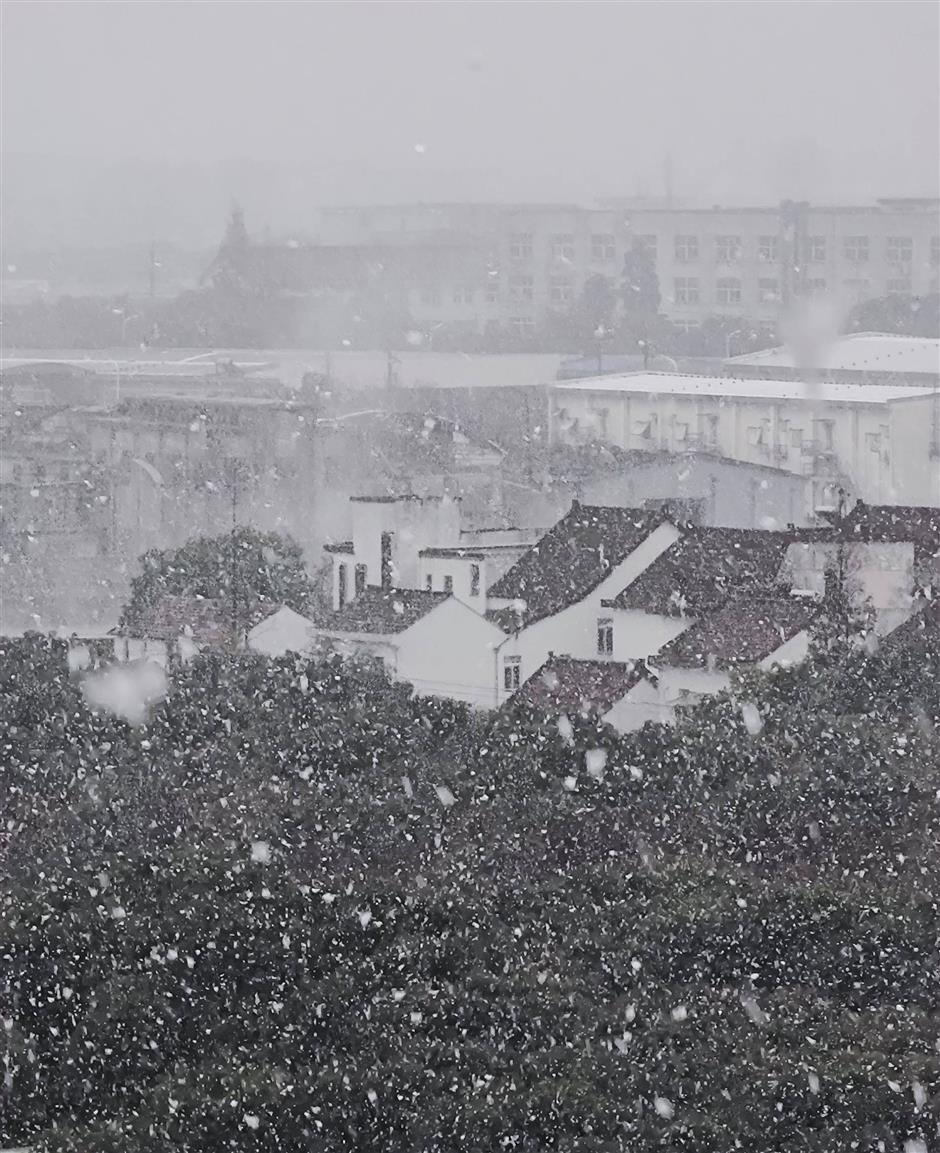 Snowfall hit suburban Jinshan District in north Shanghai as the mercury dropped below 4 degrees Celsius in most parts of the city.

With the drop of temperature, Shanghai Health Promotion Center reminded elderly people, patients with chronic diseases, children and those with weak immunity should be alert and avoid going out during the cold spill.

If leaving home, these people, especially those with cardiovascular diseases, should keep warm and wear hat.

Chronic disease patients must follow doctors' guidance and conduct monitoring on blood pressure and glucose and visit the hospital whenever suffering symptoms like numbness in one side of the body, chest sickness, nausea with vomiting.

Delivery sites and courier service providers have put in extra efforts to support their riders in response to rising demand for food and grocery amid the cold weather.

In selected downtown areas in Shanghai, deliveries jumped about 20 percent, according to Meituan. 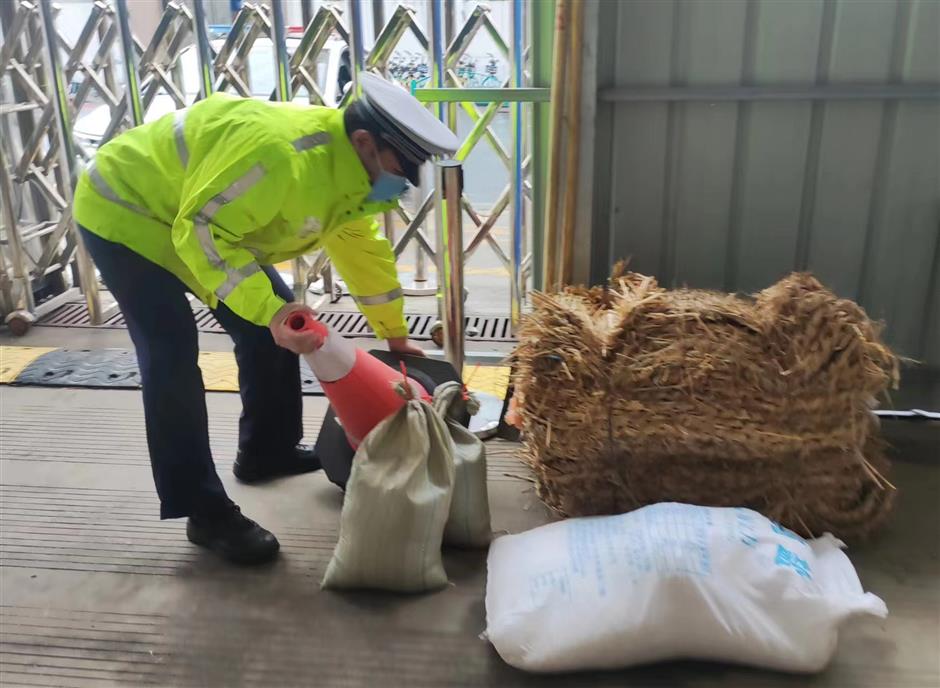 The rainfall also causes some traffic congestion in the rushing hours.

They increased the staff on major roads and crossing sections, such as sections of Humin elevated road and North-south elevated road, in advance.

"We have prepared spades, salt, meadows and other tools in advance," said a policeman in Yangpu District. "In case there is an iced-up place, we can deal with it as soon as possible." 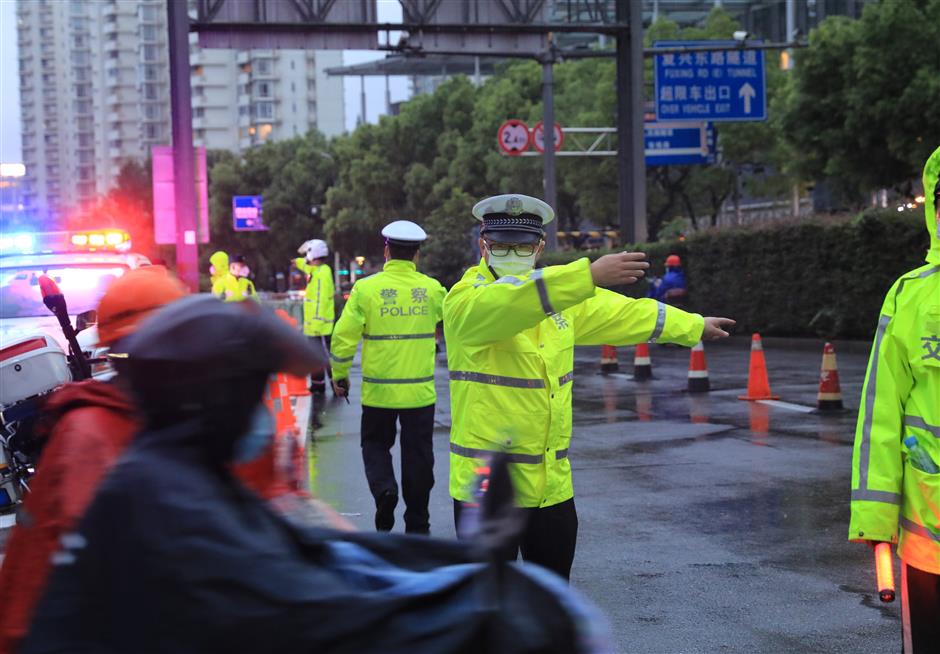