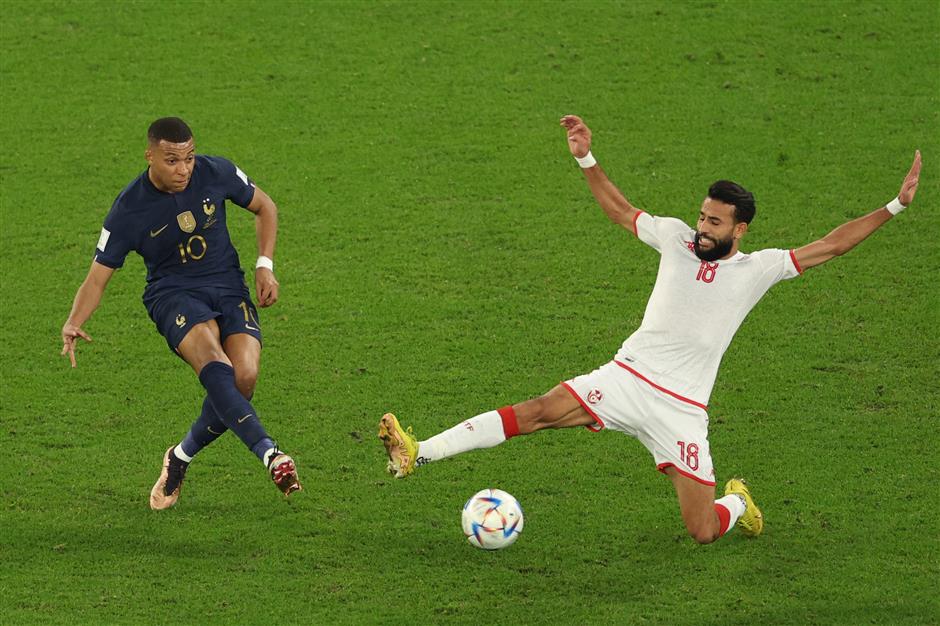 Tunisia's midfielder Ghailene Chaalali tries to block a shot by France's forward Kylian Mbappe during the Qatar 2022 World Cup Group D football match between Tunisia and France at the Education City Stadium in Al-Rayyan, west of Doha, on November 30, 2022.

Defending champions France finished as Group D leaders despite a 1-0 defeat at the hands of Tunisia at the FIFA World Cup on Wednesday.

Tunisia almost saw their stunning victory over Didier Deschamps' side slip away in the last minute, but Antoine Griezmann's goal was canceled by VAR. However, it was not enough to secure the African team a spot in the last 16 as they ranked third in the group. France and Australia were the top two finishers and progressed.

France had better goal difference over Australia, who beat Denmark 1-0 in the other match on Wednesday.

Captain Wahbi Khazri scored the winning goal for Tunisia in the 58th minute through a brilliant sole performance, as he dribbled from the middle circle to the box and slotted the ball into the far corner.

"Of course we are disappointed to go out because we didn't do enough in the first two matches. We are left with a bit of a bitter taste, but I think we have made the Tunisian people proud," said Khazri.

The Ajaccio-born forward plays for Montpellier in Ligue 1 and is one of six players in the Tunisian line-up who were born on French soil. He was capped for France at Under-21 level.

The 31-year-old is the first African player to score in three consecutive starts in World Cup history.

Deschamps' squad went into the match having already secured a place in the knockout stage, so the 54-year-old Frenchman chose to rest most of regular starters including Kylian Mbappe, Ousmane Dembele and Griezmann, and brought them on when his team fell behind in the second half.

But all the efforts from those star strikers failed to earn a goal for Les Blues. Griezmann did score in stoppage time which sent Tunisian supporters in the stadium into silence, but the referee checked VAR and canceled the goal.

"They still had top-class players out there but we were superb and I think the result is down to us," Khazri added.

Khazri's goal had once sent Tunisia to second place in the group, but only for a couple of minutes. Australia took the lead against Denmark and finally claimed the victory to regain the spot and to stay in the tournament.

"Unfortunately in football it is better not to have to rely on others for results, but we can go out with our heads held high," said Khazri.

It was Tunisia's third World Cup victory, and France's first loss at the tournament since the 2014 quarterfinals where they lost to Germany 1-0.