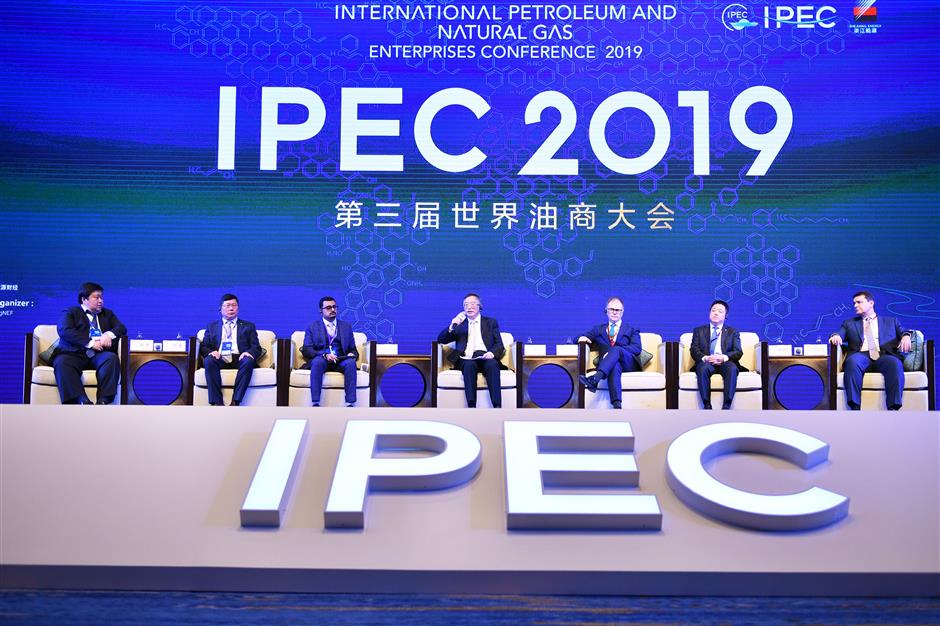 The third International Petroleum and Natural Gas Enterprises Conference attracts enterprises in the field of petroleum and leading firms in the global chemical industry.

Oil and gas trade in the Zhejiang free trade zone is expected to exceed 300 billion yuan (US$42.34 billion) by the end of the year, said Han Jun, vice mayor of Zhoushan, at the third International Petroleum and Natural Gas Enterprises Conference.

“We hope the turnover can reach 500 billion yuan next year,” Han added.

As the only free trade zone in China centered on the construction of an entire oil and gas industry chain, the China (Zhejiang) Pilot Free Trade Zone reported 192.3 billion yuan of oil and gas trade in the first eight months of the year, up 33.5 percent from a year ago.

The Zhoushan-based zone also supplied 2.48 million tons of marine fuel during the January-August period, up 10.6 percent year on year. 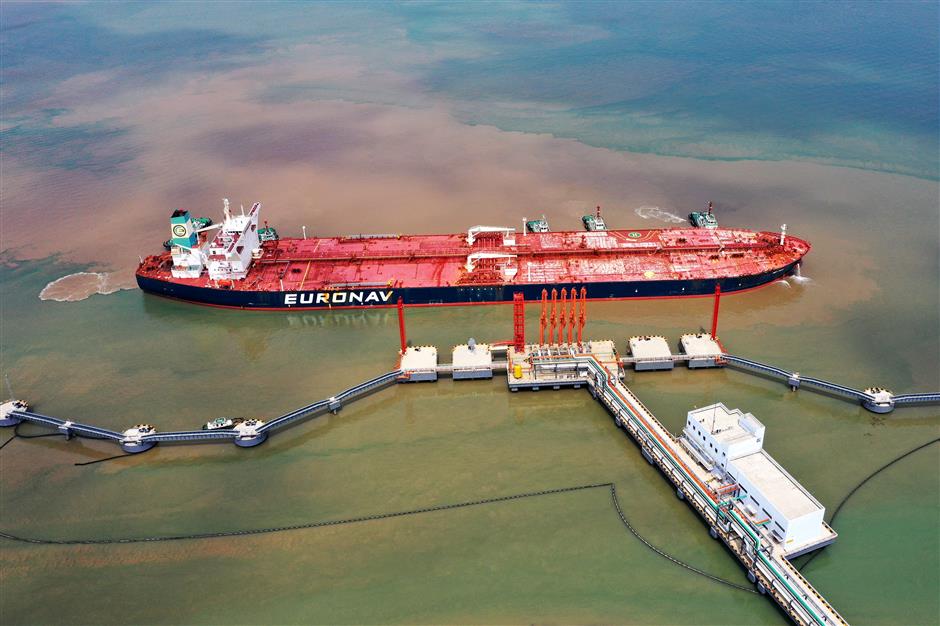 The conference attracted 62 Global Fortune 500 companies, including 18 of the world’s top 50 enterprises in the field of petroleum and 16 leading firms in the global chemical industry.

By the end of the year, the first phase of the 40-million-ton refining and chemical integration project from Zhejiang Petrochemical Corp, one of the largest industrial projects in the world, will be officially put into operation.

Zhoushan, at the meeting point of China’s eastern shore and the Yangtze River, has received strategic support from the central government in recent years, thanks to its location, port facilities, marine resources and other advantages.

It also plans to achieve three 100-million-ton targets — in reserve capacity, refining capacity and trading capacity — according to Han, who is also the deputy director of the free trade zone.

“There are many uncertainties in the global environment, which have brought many challenges and opportunities to the oil and gas market,” Alexander Sanna, chief executive officer of Glencore’s global oil and gas industry, said at the conference.

As the largest producer and consumer of energy on the planet, China has opened its arms and sought cooperation, giving new impetus to the development of energy industries such as petrochemicals.

The Zhejiang free trade zone focuses on promoting the facilitation of bulk commodity investment and trade liberalization with the whole oil and gas industry chain, which has attracted quite a number of petrochemical industry giants to seek cooperation in China.

“With superior geographical location, excellent storage and transportation capacity and strong petrochemical production capacity, we expect Zhoushan to become the hub of oil and gas trade and have the potential to grow into a low sulfur fuel oil production center with significant cost advantage,” Sanna said.

Glencore has established a joint venture with Zhejiang Petroleum, which has completed more than 300 tons of oil trading in just a few months.

In Yang’s view, China’s petrochemical industry will focus on the trend of refining and chemical integration, production capacity concentration, technological innovation, high-end development and industrial park agglomeration in the future.

A year ago, ExxonMobil and Zhejiang Energy Group Co signed a 20-year cooperation agreement on 1 million tons of LNG, starting from the beginning of next year. 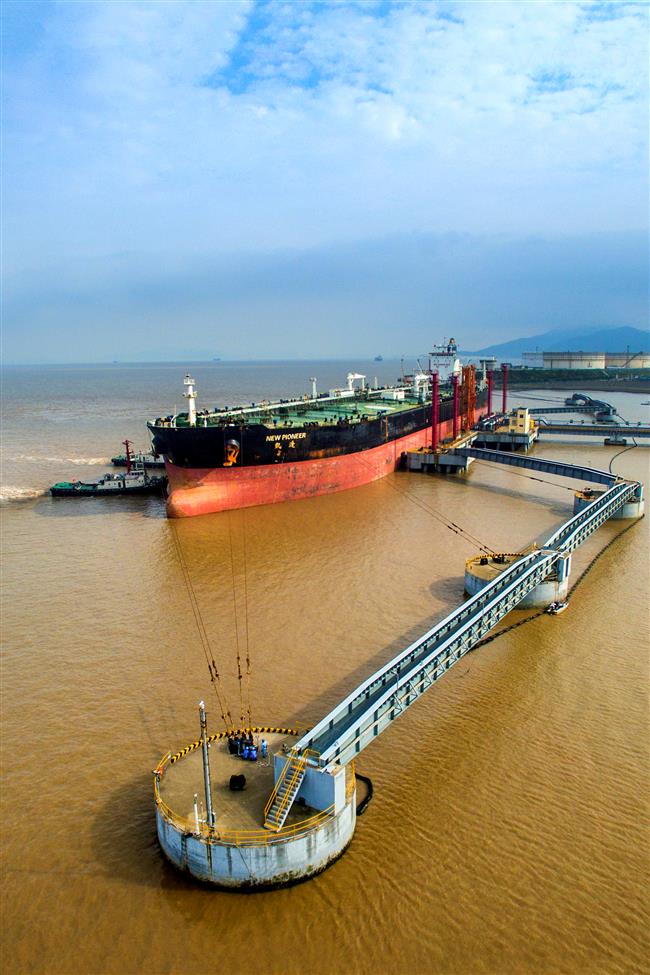 A bunker unloads crude oil at Dinghai District in Zhoushan.

Since natural gas was designated as one of the country’s main energy sources, China has realized its role in balancing energy security and energy efficiency.

What impresses him is that over the past 15 years, China has made extensive use of natural gas as an efficient energy product, while also building a more reliable and efficient power system.

“We hope that by deepening cooperation with market leaders, we can promote a smooth transition to clean and sustainable energy,” Volkov said.

Li Shuirong, chairman of Zhejiang Petroleum & Chemical Co, said at the conference that the leading oil companies continue to accelerate the development of natural gas, and China’s basic chemical industry is also going through a critical period of upgrading.

In recent years, Chinese enterprises have increased investment, created a new situation of leading the world petrochemical market, and a diversified competition pattern has been formed.

Li pointed out that China has formed a complete basic chemical industry system, and industry competitiveness will be further enhanced through restructuring, transformation and upgrading.

Yuan Jiajun, governor of Zhejiang Province, said in a letter to the conference that building a resource allocation base with international influence is a historical mission entrusted by the state to Zhejiang free trade zone.

“The International Petroleum and Natural Gas Enterprises Conference is an important window to show the achievements of the whole oil and gas industry chain construction in the Zhejiang pilot free trade zone, as well as an important platform for international oil and gas industry exchanges and cooperation, mutual benefit and win-win solutions,” Yuan said in the letter. 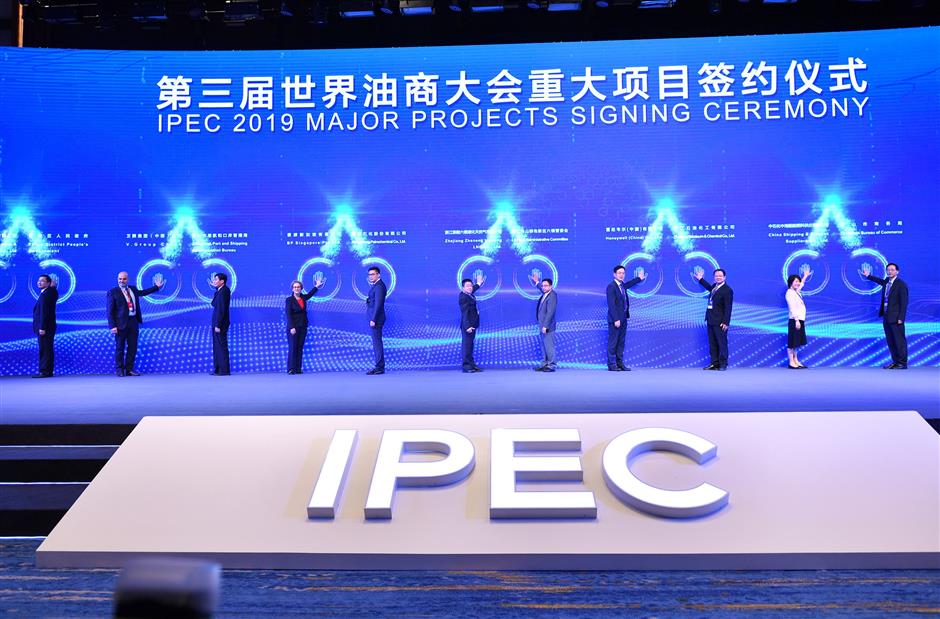 Enterprise representatives put their hands on the screen to mark the mutual cooperation at the signing ceremony.

Liu Baohua, deputy director of the National Energy Administration, said: “With the rapid development of China’s economy and society, the cooperation between China and the world in the field of oil and gas will be more extensive and in-depth.”

Zhang Jiwen, vice minister of the General Administration of Customs, said that the administration attaches great importance to the construction and development of the free trade zone.

In the past two years, focusing on oil and gas-based trade facilitation, it has launched 56 innovations, 30 of which were customized for the Zhejiang pilot zone.

Jeremy Weir, chairman and chief executive officer of Trafigura Group, said that his company has been paying attention to the development of Zhejiang free trade zone in recent years.

An unveiling ceremony during the conference also marked the official establishment of Zhejiang Mercantile Exchange.

Wang Tingge, chairman of WZ Group, said at the ceremony that the exchange is a standardized, diversified, transparent and open market with controllable risks and operated according to international rules.

“It will also deepen cooperation with the Shanghai Futures Exchange to accelerate the establishment of an open and fair trading system, so that all deals can be assured,” Wang said.

Lu Feng, deputy general manager of the Shanghai Futures Exchange, said that the listing of crude oil futures last year has had a wide range of influence at home and abroad.

“In order to serve the national strategy of the Yangtze River Delta integration and build a national oil and gas futures market with global influence, we need to provide more products and tools of financial market.

“The next step is to carry out all-round cooperation with Zhejiang Province in product, market, training, talent exchange and financial science and technology to jointly build a Yangtze River Delta market with “the on-site futures market in Shanghai and the off-site spot market in Zhoushan,” Lu said.