City basks in the aura of nearby import expo 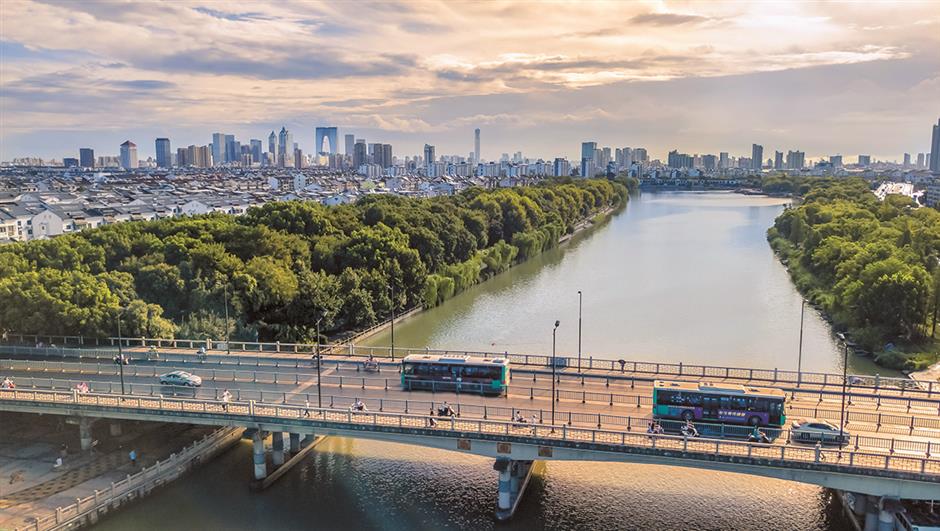 Suzhou combines elements of both tradition and modernity.

An old saying goes that grass won’t grow under big trees. But in Suzhou, Biluochun green tea debunks that traditional wisdom. It thrives under trees.

The city’s famed tea specialty, dating back to ancient times, is grown among various varieties of fruit trees to optimize land use while adding a unique, fruity fragrance to the tea.

The same might be said for Suzhou’s relationship with Shanghai. Only 20 minutes from Shanghai by bullet train, it has thrived with its larger neighbor and, indeed, was the source of many skilled people who migrated to Shanghai and contributed to its rapid progress.

Suzhou, which occupies less than 0.1 percent of China’s land mass, prides itself on trade volume that accounts for 7.7 percent of the nation’s total. It has consistently ranked among the top 10 of Chinese cities in terms of gross domestic product, occupying the seventh rung in 2018.

“As Shanghai’s closest neighbor, Suzhou has benefited from Shanghai’s development and its catalytic role in stimulating growth in surrounding cities,” Lan Shaomin, Suzhou’s Party secretary, told Shanghai Daily. “Suzhou has captured key opportunities, such as the development of Pudong, for its own rapid development.”

Last year’s inaugural China International Import Expo was greeted with great enthusiasm by both the government and companies in Suzhou. More than 5,700 local companies went to the trade fair in Shanghai looking for products and partners, and many foreign participants took the opportunity to visit Suzhou.

Of the deals closed between Suzhou companies and foreign counterparts, one had accumulated imports valued at US$80 million as of the third quarter of this year.

Many local companies also found new partners at the exhibition. Suzhou Newcity Investment signed an agreement to collaborate with Kazakhstan Temir Zholy on trial operation of China-Europe trains that pass through Suzhou and the Kazakh city of Khorgos on route to Warsaw.

Twenty-six foreign companies that have maintained close contact with Suzhou partners since the last exhibition have accepted invitations to attend this year’s event, which runs from today to Sunday in Shanghai.

During the event this year, local conferences and forums in five different industries will be held in specialized industrial zones in Suzhou.

“After more than 40 years of development, Suzhou now encompasses 35 industry categories,” Lan explained. “We will leverage the opportunity of the second CIIE to import projects to build new industry chains as well as supplement and enhance existing ones. We are striving to build a group of industries that can compete in the world and become showcases of Suzhou’s advanced manufacturing industry.”

Finding the balance between development and environment is of increasing importance in many Chinese cities where manufacturing is strong, and that is especially true in Suzhou. The city is famous for its traditional gardens and well-preserved old town that still reflects “urban planning” from more than 2,000 years ago.

“Outside of the old town, we have many industrial zones in Suzhou, but the development of the old town is very different,” Lan explained. “We must not modernize the old town to the point where there is no tradition left, but we need to add new stimulus, productivity and vibe on top of tradition and cultural heritage. It needs preservation and development at the same time.”

He cited the recent International Design Week held in the city’s old town, which emphasized new potential in an old setting.