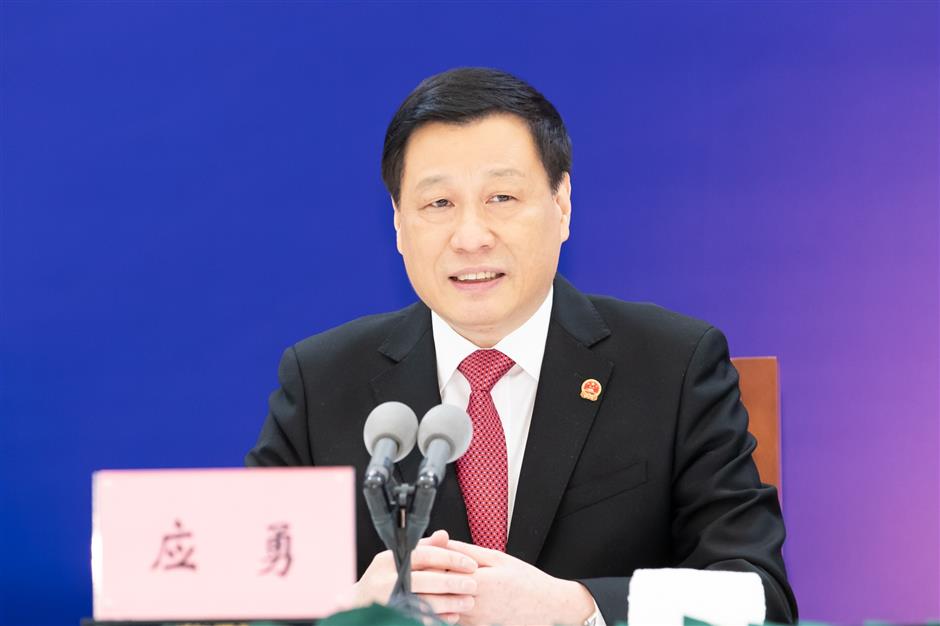 The city's economic growth maintained overall stability and steady progress in 2019, when local gross domestic product increased by 6 percent despite a high base and increasing downward pressure.

Tax and fee reductions last year equalled over 202.2 billion yuan (US$29.45 billion), reducing local revenue growth by 11 percentage points, yet Shanghai's general public budget revenue still increased by 0.8 percent. The structure of fiscal income was also good, Ying said when attending the press conference on the closing day of the annual session of the Shanghai People’s Congress on Monday.

"More importantly, people's livelihoods continue to improve, with a total of 589,000 new jobs being created and the consumer price index up by 2.5 percent to remain generally stable," Ying said. "We have also seen sustainable improvement in the ecological environment."

For 2020, Shanghai has set a goal of adding 500,000 new jobs, the same as last year. Special care will be offered to families with no employed members to help them find jobs.

In terms of consumer prices, Ying stressed that Shanghai, as a megacity and an economic center, will ensure that the supply of staple and non-staple foods in the city is sufficient, while prices remain stable and quality stays safe, especially for those living in hardship.

The mayor added that the city will continue to forge ahead with implementing garbage-sorting regulations.

Publicity of the rules and enforcement will focus on universities, colleges, hospitals and hotels whose garbage-sorting results lag behind government organizations and residential communities, Ying said

The government will also step up efforts to address the utility of low-value recyclable waste, according to the mayor.

Garbage-processing facilities and their functions shall also be strengthened, as the city aims to bury no waste by 2022.

In terms of policies regarding people’s livelihood, the mayor said special attention will be given to job creation, prices, developing elderly care and improving housing for residents living in old residential quarters, among other areas.

The government will continue to cut its expenses this year, but the mayor said the expenditure structure will be optimized and certain expenses will be sustained and strengthened.

As for the major task of developing the STAR Market on the Shanghai Stock Exchange and the pilot registration-based IPO system, the city has made great efforts and seen significant progress. To date, 13 enterprises based in Shanghai have successfully listed on the STAR Market, raising a total of 15 billion yuan, according to Ying.

Also of note, Shanghai will press ahead with the development of the Lingang Special Area of the China (Shanghai) Pilot Free Trade Zone and fully leverage the leading role of the FTZ.

The 50 new special supportive policies for the Lingang area launched last year have all been put into effect. The city government has also formulated administrative measures for the new area, optimizing the system and mechanisms for its development, while relevant policies at the national level are also being pushed forward.

In the past five months since the opening of Lingang, a total of 4,025 new enterprises have been established in the new area, and 168 key projects have been signed with an overall investment of 82.19 billion yuan.

In 2020, the city will emphasize implementing policies related to the liberalization of investment, trade and transportation, free flow of capital, and freedom of employment as well as convenient connectivity. The development of the Yangshan Special Comprehensive Bonded Area will also be promoted, according to Ying.

Another highlight will be the comprehensive development of a one-stop online platform offering government services, which is a core measure in promoting the city's business environment.

This year, authorities will endeavor to deepen the interconnection and sharing of data, and strengthen the combination of online and offline services, so as to improve the experiences of citizens and enterprises in dealing with government affairs, "making it as convenient as online shopping," Ying said.