Shall we dance? Tesla in tune with city policies 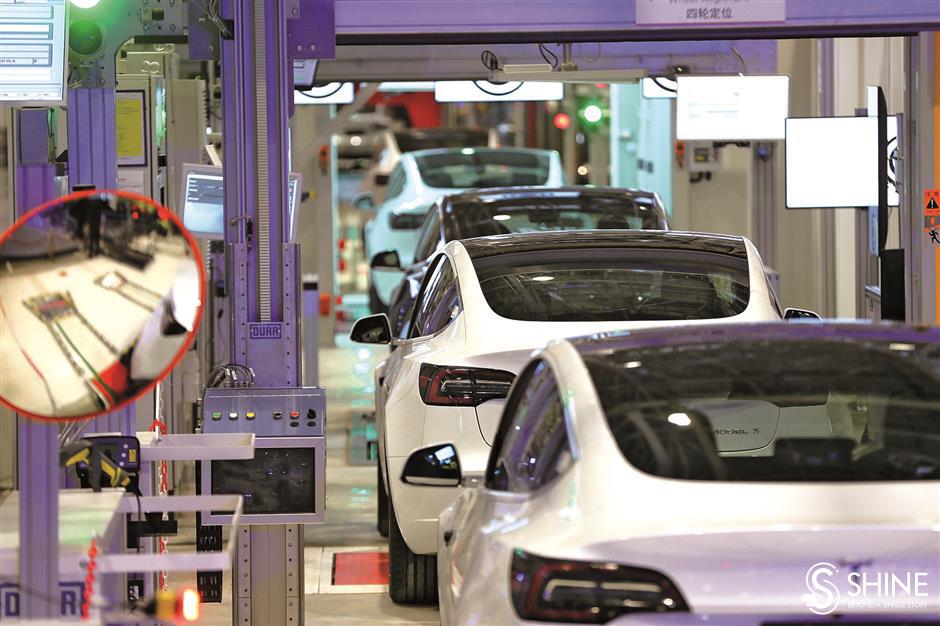 The first Tesla Model 3 sedans made at the company’s new factory in Shanghai are delivered to customers in a landmark ceremony early in January.

The new Tesla factory in Shanghai has become a “poster child” in the city’s campaign to embrace foreign investment as part of its ambition to become a global hub of technology ingenuity and environmental protection.

The US electric car company recently rolled its first cars off the assembly line, just a year after groundbreaking for the site.

At an event marking the milestone on January 7, Founder and Chief Executive Officer Elon Musk danced onto the stage as Model 3 sedans were driven, one by one, for presentation to 10 customers. The images went worldwide.

Musk has plenty to dance about as the company rachets up its presence in the world’s largest auto market.

The company plans to ramp up production to 500,000 cars a year in two or three years. Its current capacity at the Shanghai plant is over 3,000 Model 3s a week.

The starting price of the Shanghaimade Model 3 sedan is about 323,800 yuan (US$46,650). Government subsidies for clean-energy cars and the company’s pledge to source more local components could reduce that cost further.

Tesla’s US$2 billion Gigafactory, its first outside the US, is located in the Lingang Special Area of the China (Shanghai) Pilot Free Trade Zone. It is the largest foreign-invested manufacturing project in Shanghai.

The 357 days between groundbreaking and production marked a new record for global automakers in China.

At the event, Tesla announced that its Shanghai team will start work on Model Y prototypes in 2020, while also tooling the Shanghai plant for production of mid-size electric sports-utility vehicles.

“Without the support of Chinese governments at all levels, especially Shanghai, we wouldn’t have been able to show this progress,” said Musk. “Together, we have made history.”

Tesla’s success story is testament to Shanghai’s relentless pursuit of a better business environment and to China’s determination to accelerate the opening of its markets to foreigners.

Those were focus issue as Shanghai’s Party Committee and municipal officials held their first conference of 2020.

Party Secretary Li Qiang reiterated that Shanghai will make every effort to create a more internationally competitive environment for investment and development. He indicated that mission remains a priority for the government.

“Departments at all levels in Shanghai have undergone a fundamental change in the way they think and operate in the past few years,” he said. “Efficiency of services has become ingrained in what they do.”

Among the goals on deck are the promotion of a one-stop online platform for government services, improvement of the city’s performance in the World Bank’s “Doing Business” assessment and implementation of policies protecting and stimulating the vitality of market entities.

Shanghai will take Hong Kong and Singapore as benchmarks in the development of its business model, learning from their ideas and experience in offering government services, said Ma Chunlei, the city government’s deputy secretary-general and director of the Development and Reform Commission.

Take the processing of construction permits as one example. Shanghai will try to emulate Hong Kong’s “one-stop center” mode, providing services that span the whole process of application, approval, inspection and acceptance checks through a single window.

To address problems faced by foreign companies, including cumbersome approval procedures and long waiting times for employee work permits, the city will create single-window services to cut down times to as little as seven working days.

“In addition to the World Bank’s rankings, we should attach no less importance to catering to the individual needs of companies,” Secretary Li said.

Meanwhile, Tesla isn’t looking in the rear-view mirror. Musk said the company plans to open a “super cool” design center in China to create an “original car” for sale in markets around the world.

“Ultimately, the Model Y will have more demand than probably all of the other cars of Tesla combined,” he said. All these plans add up to increased investment in China, he said.

The company does face challenges, amid slowing auto sales and a crowded field of companies seeking to mass produce electric cars.