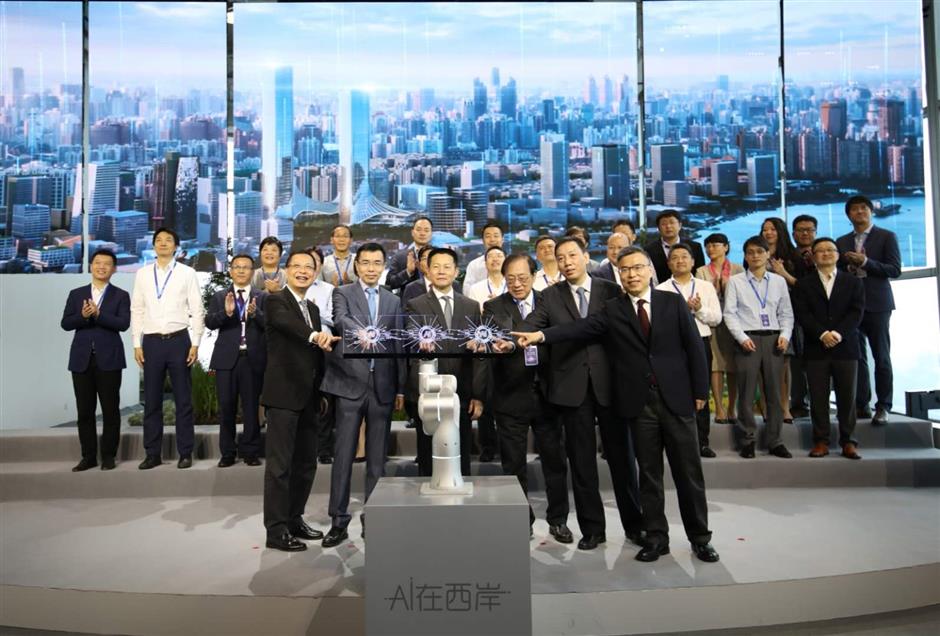 Shanghai AI Tower in Xuhui District launched its global promotion on Wednesday ahead of this year’s World Artificial Intelligence Conference, which kicks off on Thursday.

Twenty leading artificial intelligence companies from both home and abroad have moved into the over-200-meter twin buildings on the West Bund waterfront along the Huangpu River.

They include industry giants such as Microsoft Research Asia, Huawei and Alibaba as well as leading startups like United Imaging, Yitu and Mininglamp.

Despite the novel coronavirus outbreak, Xuhui’s AI sector has grown by nearly 30 percent between January and June, said Fang Shizhong, the district’s director. He invited global AI companies and professionals to move to the AI Tower to develop the West Bund into an AI Valley.

Bart Selman, president of the Association for the Advance of Artificial Intelligence, congratulated the opening of AI Tower through a video.

“We already have had great connections for rapidly growing Shanghai's AI community and just started the AAAAI Squirrel Award for AI for the benefit of humanity,” Selman said.

Marco Landi, former worldwide president of Apple Computer and president of the European AI Institute, said he expects “a very strong cooperation with the AI Tower.”

Among the first batch of key enterprises in the buildings, Microsoft Research Asia focuses on computer application research, Huawei has created an innovative center for its Kunpeng processors and Alibaba will mainly develop culture and entertainment as well as new retail sectors. 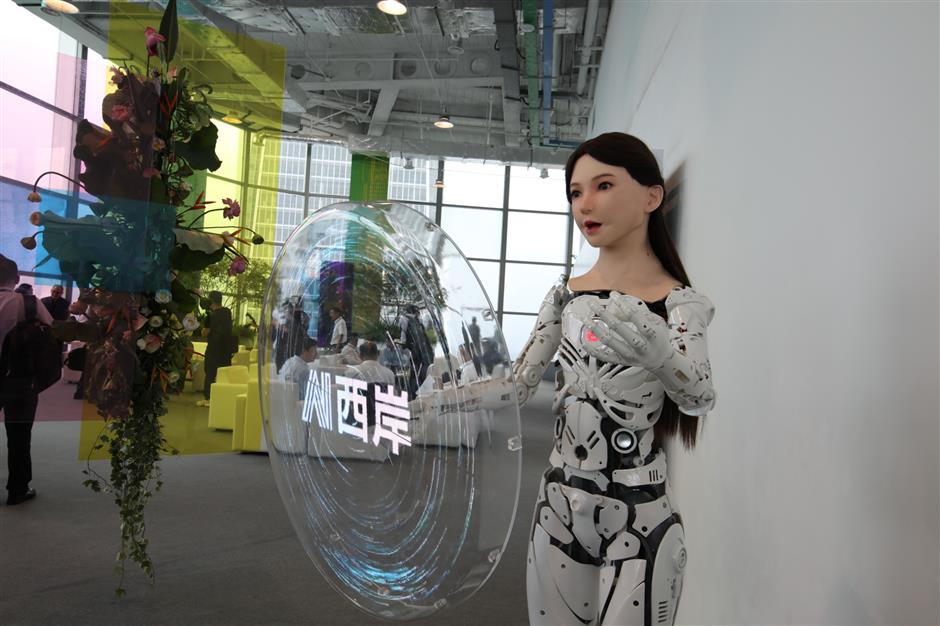 An AI robot introduces the AI Tower and West Bund development at a global promotion meeting on Wednesday. 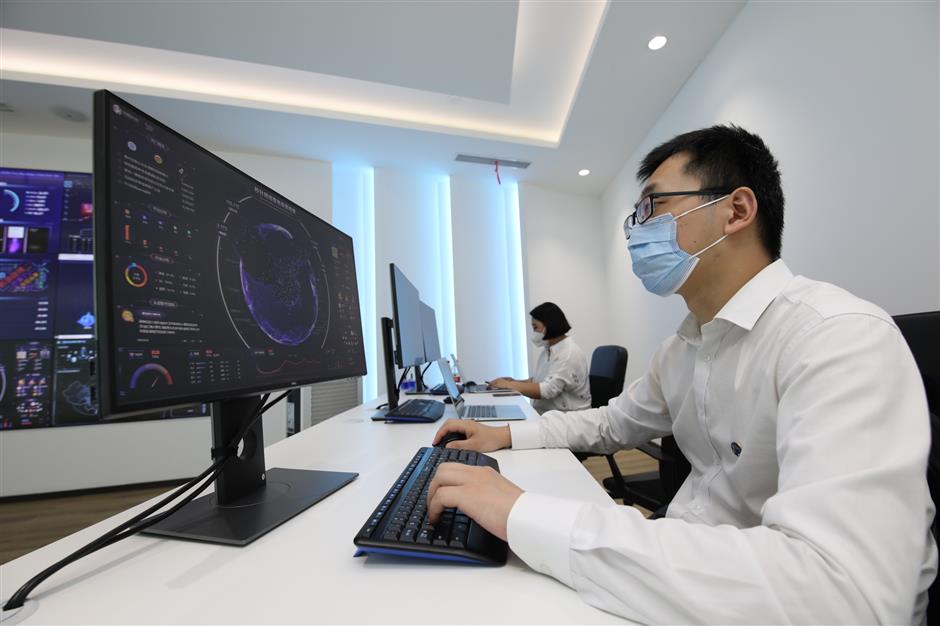 Scientists work in the AI Tower.

Two national AI innovation platforms have also been unveiled in the building. Yitu, a leader in facial recognition, will establish one of the platforms on visual computing, while Mininglamp Tech will develop a new-generation AI platform for intelligent marketing.

“Many of the marketing strategies involve analysis and decisionmaking from AI. The platform aims to imitate the brains of top analysts and offer the best solutions to Internet companies for their online promotions,” said Wu Minghui, founder, president and CEO of the Mininglamp.

The AI Tower features 5G network coverage and an intelligent building management system. It will serve international exchanges, application exhibitions as well as research and transformation of AI technologies. The top floor of the building, where the promotion campaign was launched, will open as a shared center for global AI companies to showcase their products and exchange with each other.

Around the building, Xuhui District will build an “Intelligent Valley” covering 1.2 million square meters along the Huangpu River for AI-related industries.

In another key project, Beiyang AI Town, covering 543,000 square meters along the Dianpu River and the city’s Outer Ring Road, will become the city's first AI town where AI and big data technologies will be applied in urban information and public infrastructure as well as public service facilities. 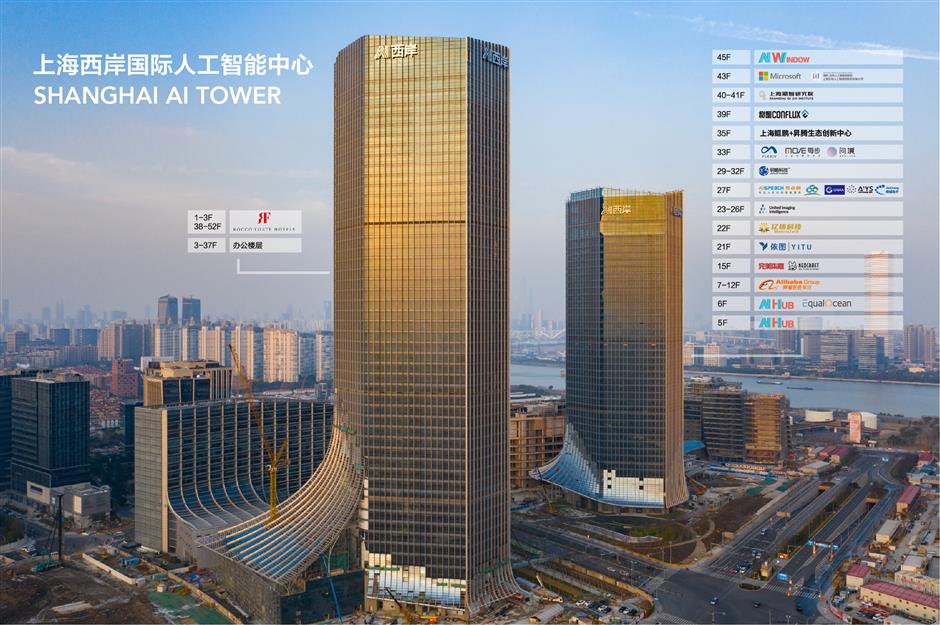 The first batch of AI companies based in the AI Tower twin buildings.