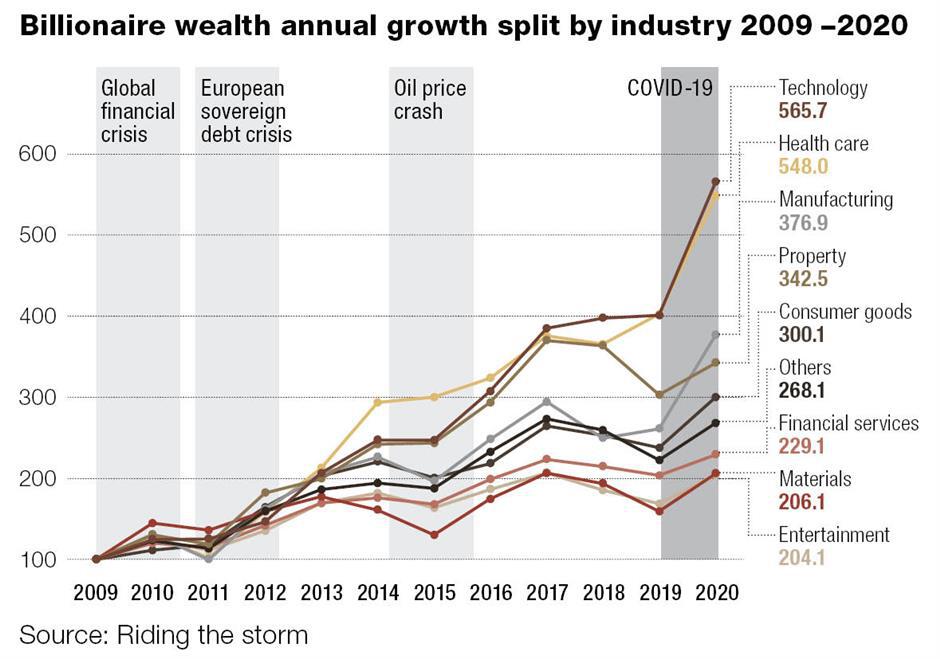 Billionaire innovators and disruptors, active in tech, health care and industry, are contributing to reshaping the economy at a faster pace than ever before, according to a report.

It was noted that total billionaire wealth reached a record of US$10.2 trillion at the end of July 2020, of which the Chinese mainland contributed 17 percent.

Over the past decade, global billionaires have doubled in number and their total wealth has more than tripled. By July 2020, there were 2,189 billionaires, up from 969 at the end of 2009, according to the report.

Total billionaire wealth reached US$10.2 trillion at the end of July, a new high after the year’s V-shaped rebound in asset prices which surpassed the previous peak of US$8.9 trillion reached at the end of 2017.

The Asia-Pacific region had the highest number of billionaires (831), with half of them from China, the world’s second-largest billionaire group.

The total number of Chinese billionaires increased, despite the COVID-19 pandemic, to a record 415 individuals, including 145 new entrants, the highest globally in 2020.

Total wealth in China grew by 71 percent between 2018 and the end of July this year to US$1.7 trillion. Some 98 percent of the billionaire population in China is self-made, compared with 60 percent in Europe, the Middle East and Africa, and 72 percent in the United States.

The top wealth driving industries in China this year and last year were health industries, materials, and entertainment and media. In the last sector, online gaming was the sub-sector trending the most.

"China is the first country to recover from COVID-19 with its economy continuing to rebound. The pandemic and volatile markets have not stopped China’s billionaires from creating wealth. The number of Chinese billionaires has once again set a new record," said Marina Lui, head of wealth management China at UBS Group.

Harry Qin, consulting leader of Chinese mainland banking, securities and asset anagement at PwC, said: “COVID-19 has brought challenges to the Chinese and global economy, but the billionaires in China go against the trend. The total number of Chinese billionaires not only set a new record, but billionaire wealth grew fastest of all in Asia."

The report also pointed out diverging fortunes amid the COVID-19 storm.

As the pandemic grew in the first few months of 2020, just a few extraordinary weeks in February and March caused billionaire wealth to fall 6.6 percent compared with 2019 and the first four months of 2020, by US$564 billion to US$8 trillion. The number of individual billionaires fell by 43 to 2,058.

Bucking this trend, the wealth of health-care industry billionaires climbed 10.2 percent over this period. The rapid application of new technologies also enabled technology and industrial billionaires to grow their wealth by 0.8 percent and 4.8 percent respectively.

"The pandemic has accelerated digital transformation of the economy, the innovators and disruptors will gain more competitive advantages by using emerging technologies," Qin said.

In contrast, materials and real estate billionaires experienced the biggest losses, reflecting a fall in commodity prices and the value of real estate businesses. Their total wealth fell by 17.8 percent and 16.6 percent respectively.