Shanghai one of the world's smartest cities 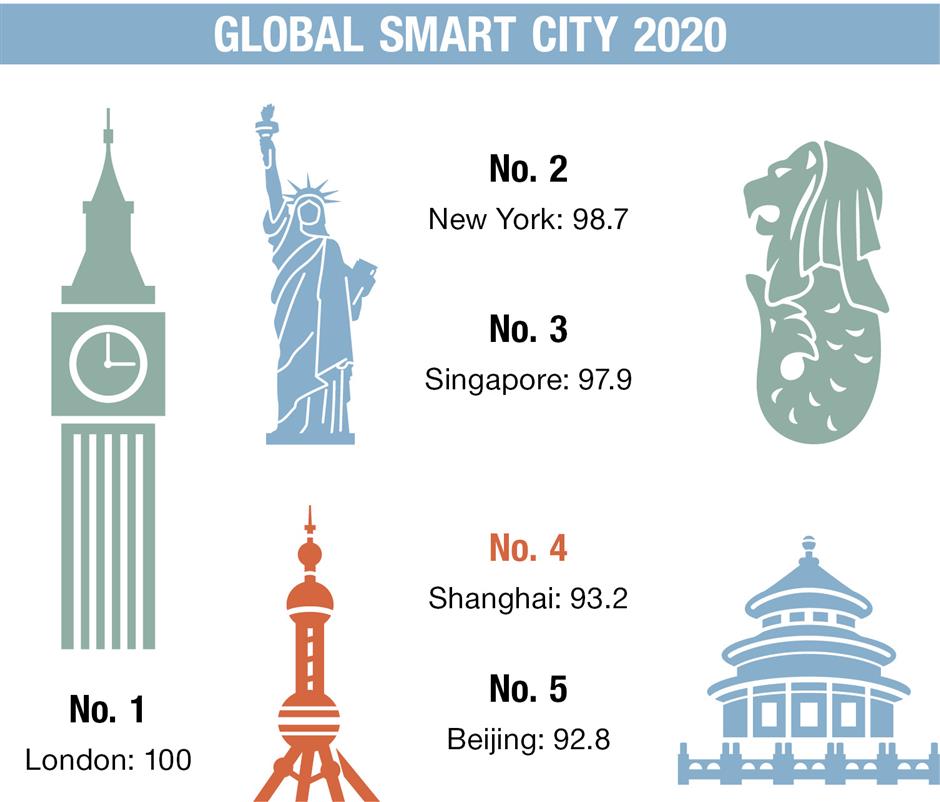 Shanghai ranked fourth among the world’s best smart cities, with its smart services topping all the others, according to the Global Smart City 2020 Index.

The rankings were released on Wednesday by the United Nations Public Administration Network in partnership with the Shanghai Academy of Social Sciences and Fudan University.

London was named the world’s best smart city, followed by New York and Singapore. Shanghai was the highest Chinese city, ahead of Beijing (5th) and Hong Kong (7th).

The ranking was based on six component indexes — infrastructure, economy, services, governance, innovation and reputation — which had a wide coverage from Internet bandwidth, digital application access, to research and development capacity, as well as data transparency.

“Shanghai has made quick achievements in its smart-city construction, and it is a model to reflect China’s efforts in the upgrade of cities,” said Wang Zhen, head of the Institute of Information at SASS.

Shanghai excelled in smart services, which refer to the use of advanced information and communication technology to improve public services, especially in health care, public transport, education and employment services.

“Shanghai has taken a people-oriented approach in its urban governance and has set up a sophisticated network to encourage one-stop services that aim to reduce red tape to the minimum for the public,” said Ling Hong, director of the Smart City Research Center under the School of Management at Fudan.

“One-stop services have made it more convenient in many aspects to handle social affairs, and in the future, more people engagement in the design of the smart services may help it continue to improve,” Ling said.

The city echoed the “human-centered” principle emphasized in the report, which said “fundamental challenges of the city are typically not solved by technology itself, but more by the governance of the city.”

It also noted that, at the same time, more introduction of technology often requires complementary policies.

“Only when the policy changes are aligned can the best performances be achieved,” the report said.