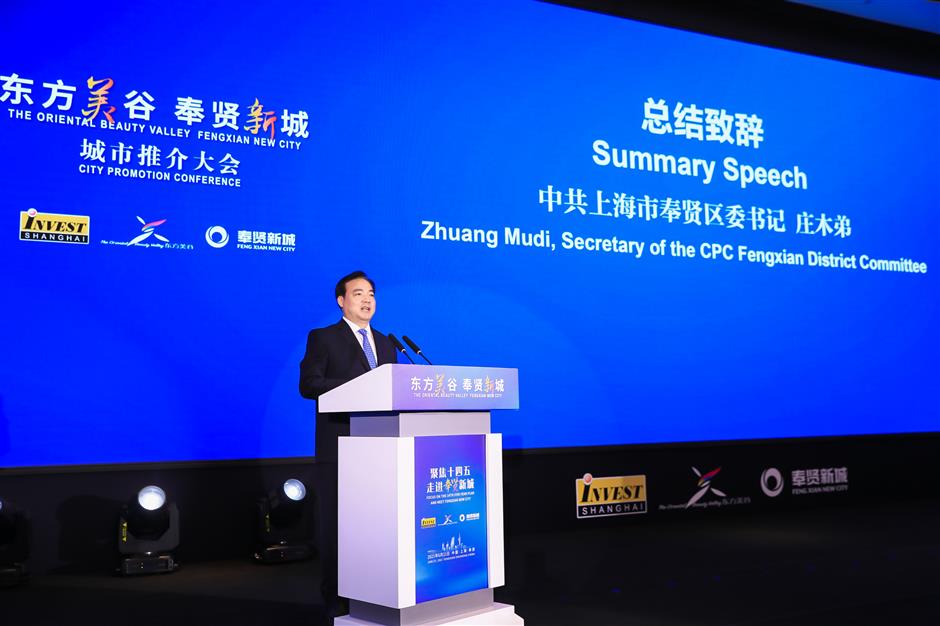 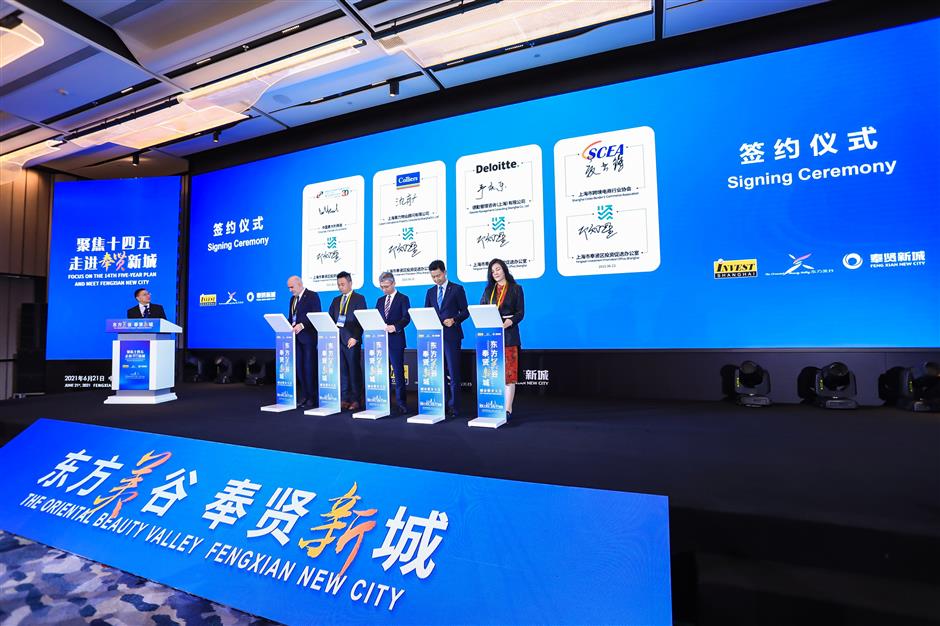 The Fengxian New City Promotion Conference kicked off today with a dozen foreign investment contracts signed, another sign the district has become a magnet for businesses from home and abroad.

Zhuang Mudi, secretary of the Communist Party of China's Fengxian District Committee, told the promotion conference that Fengxian remains committed to opening up with solid measures to enhance its business environment.

Zhu Yi, vice chairman of the Shanghai Commerce Commission, said the strong vitality of Fengxian's health and wellness, beauty and other relevant industries is emblematic of the district's huge development potential.

In the first five months, paid-in foreign investment in Shanghai totaled US$10.27 billion, 21.5 percent higher than a year ago, and Fengxian will optimize its industry layout and build up commercial-service clusters that improve links with the Yangtze River Delta region.

Vice president of China-Italy Chamber of Commerce and general manager of Shanghai Bracco Sine Pharmaceutical Corp Valtero Canepa said in an interview today that he expects the new city development schemes to provide a favorable development environment for a wide range of industries.

"In Fengxian, we hope to expand cooperation and seek development opportunities in not only general healthcare such as medicine, medical devices and hospital management, but also areas such as industrial design and green economy where Italy has a strong capability," he said.

Lorenzo Riccardi, chief financial officer of the China-Italy Chamber of Commerce, also said Shanghai is already the top destination for foreign investment, and he expects new incentives to cut operation costs which could make Fengxian even more attractive.

He noted that new development schemes in Fengxian are highly relevant for new European investors, primarily in manufacturing, quality machinery, food and beverage and fashion and retail.

Acting district mayor of Fengxian Yuan Quan said the district has the largest number of small and medium-size enterprises in the Yangtze River Delta region, and its goal is to introduce more education and medical institutions and increase population in the new city to about 1 million by 2025.

Zhang Xian, director of the Fengxian District Economic Commission, introduced characteristic industries in the region and industry clusters under planning, such as a hydrogen energy industrial development area and autonomous driving testing facilities.

PricewaterhouseCoopers' China Shanghai Government Affairs Leader Eric Qin noted that digitalization will be a crucial part of the new city's development and infrastructure construction to create an influential digital capital and serve as a cutting-edge role model for smart urban development and governance.

Melaleuca is among the foreign businesses that have doubled down on their investments in the district, according to Senior Vice President of Operations Kevin Ying.

After initially setting up its business in 2003, Melaleuca began construction on its China headquarters in Fengxian in 2019 with a US$150 million investment to expand key functions, including research and development, manufacturing and logistics.