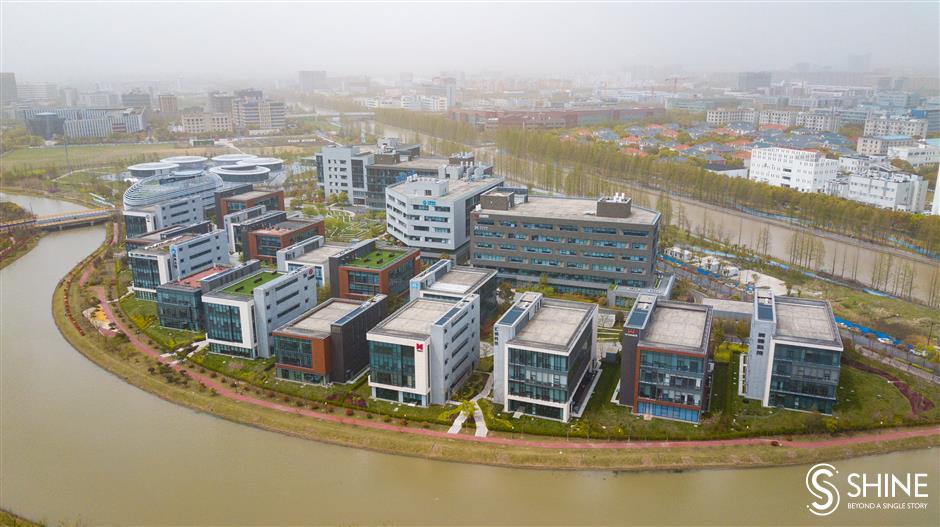 Pudong is giving new impetus to big business to embrace open innovation and support its high-level reform and opening-up strategy.

Roche Accelerator, the first in-house accelerator globally, JLabs @ Shanghai, Johnson & Johnson's first overseas JLABS incubator outside North America, and Microsoft's AI & loT Insider Lab, the first of its kind in the Asia-Pacific region, were among the first 20 to join the plan.

Notably, most of them focus on "hardcore industries," namely artificial intelligence and biomedicine.

"We are dedicated to strengthening our investment in R&D, specifically in biotech innovation in China, and are aiming to enhance collaboration with government and local partners," said Dr Harm-Jan Borgeld, Global Head of Pharma Partnering Asia, Roche.

He said many startups have great ideas, but they often need help to materialize them and transform an idea into an actual treatment that reaches patients.

In the startup stage, biopharma know-how is crucial to supporting early research.

"As one of the global leaders in the health-care industry, Roche is committed to taking an active role in further accelerating innovation, fostering collaboration and supporting innovation by catalyzing and empowering the creative minds of entrepreneurs in the very early stages of the scientific process," he said.

Over the past 31 years, Pudong has grown from farmland to a strong innovation engine.

A scientific and technological innovation hub with global influence is taking shape, supported by tens of key labs and advanced research institutes, hundreds of big companies, as well as tens of thousands of startups.

The GOI plan will promote deeper integration between these innovation agencies with authorities, financial agencies and other departments to achieve open innovation, said Wu Qiang, deputy director of Pudong.

Today, big businesses no longer rely on themselves for innovation, and instead they welcome external resources with open arms to share complementary strengths to decrease costs and increase efficiency.

Open innovation has become a global trend, Wu said, adding there is expected to be at least 100 open innovation centers set up by big business within three years.

Accordingly, Pudong will unveil a set of favorable policies to industry leaders joining the GOI plan, such as a maximum of 10 million yuan (US$1.55 million) to help open an innovation center.

Foreign investment in the Pudong New Area makes up nearly half of the city's total investment.

Accumulated foreign direct investment in Pudong, in actual use, has reached more than US$120 billion, nearly half of the city's total. It has surged from US$4.4 billion in 2015 to US$9.4 billion in 2020.

This year, it aims to reach US$10 billion, according to Cao Lei, deputy director of the Pudong Commerce Commission.

Between January and June, the actual use of foreign direct investment in Pudong totaled nearly US$5.1 billion, up 8.52 percent from the same period last year.

Altogether 14 regional headquarters of multinational companies were set up in the first half of this year, including three Asia-Pacific headquarters.

Pudong had its first regional headquarters of a multinational company in 2002.

To date, the number has soared to 373, nearly half the city's total.

It has been recognized by the city's commerce commission as the first global business unit headquarters of a multinational company in Shanghai.

"It features an efficient, open and globally competitive business environment as well as a definite advantage in attracting talent.

"The upgrade of the Shanghai headquarters helps us to enhance global resource allocation, and better radiates to the Asia Pacific region."

She said this was just the first step in Covestro's plan to take a bigger bite of the domestic market and increase investment in the city.

"We are always positive on the Chinese market," she said.

"China is Covestro's biggest market. It features financial activities in every industry. Also, China's independent innovation is so dynamic.

"China is playing a leading role in many aspects. In view of this, we will continue to invest in the domestic market."

Another manifestation is that this year Covestro will take part in the 4th China International Import Expo for the first time, and it will focus on the circular economy, quite apt for China's strategy.

China unveiled a plan earlier this month to promote the circular economy over the next five years. The plan, released by the National Development and Reform Commission, aims to basically establish a resource-recycling system in the country by 2025 as part of efforts to achieve carbon neutrality.

"We will showcase to the world our innovative and sustainable solutions, as well as sharing all of our technical solutions," Lei said.

China has issued a guideline to support high-level reform and opening-up in Pudong, and build the new area into a pioneer of socialist modernization.

It specified Pudong will serve as a benchmark for independent innovation and development, and become a showcase for global resource allocation.

"Covestro embraces a holistic approach toward innovation, and it allocates global resources based on the needs of different markets."

She said the company will explore debuting new products and solutions related to unmanned driving, clean energy, artificial intelligence and other frontier research in Pudong.

Meanwhile, in the ever-changing Pudong, Zhangjiang area will accelerate its development into a world-class science city and a center of scientific innovation during the 14th Five-Year Plan (2021-2025).

The Zhangjiang Science City, formerly the core of Zhangjiang Hi-tech Park, is one of Pudong New Area's major science and technology achievements over the past three decades and is now one of the main forces for Shanghai to become an international center of scientific innovation. Its blueprint was recently drawn up with a list of 180 key projects worth more than 200 billion yuan.

From hi-tech park to science city

The area of Zhangjiang Science City will be more than doubled, mainly to the east and the west, from 95 square kilometers to 220 square kilometers. The plan is a key phase of the area's transformation and its upgrading from a high-tech park to a science city, said Peng Song, executive deputy director of Shanghai Science and Technology Innovation Center Development Office.

Peng also stressed the importance of attracting and retaining talent, and pledged to optimize comprehensive urban service functions to meet their needs.

The construction of Zhangjiang Science Hall is due to be completed by the end of the year, and it is due for its stress test in the second quarter of 2022.

It aims to serve as a stage for various events such as international summits, roadshows, sci-tech competitions and cultural activities, to create an open and comprehensive platform for communication on science and technology.

Zhangjiang has attracted more than 22,000 enterprises, including over 1,600 high-tech enterprises, and is now home to 170 foreign-funded research and development centers.

Zhangjiang at present is rather a city of tomorrow than a high-tech park as it was called. Not just endless work for scientists, entrepreneurs and all sorts of professionals here, but a full and varied life waiting for them.

An open international community helps beach-goers of the time weave their dreams. Nes in Sunqiao is the answer to inspire innovation and entrepreneurship.

A residential compound mainly for rent, it will integrate all the elements of a smart neighborhood and welcome talent this month. Nes will be equipped with highly functional commercial facilities.

In addition to the traditional property management, fitness club, catering and laundry services, it also has a youth activity center as well as preschool education and innovation and entrepreneurship services available on the doorstep.

Al l the bui ldings here are connected through overpass, which is an effective way to enhance people-to-people-connectivity, making it an epitome of Zhangjiang – a cluster of talented people

At the same time, the developer of science city, the Zhangjiang Group, has prepared 4,000 condominiums for rent to meet the demand of talent from around the world to launch their businesses here.