Shanghai was star-struck during the week of China International Import Expo as world leaders came to promote their nation’s specialties to Chinese consumers. Some of them also left a unique impression on local residents as they held various activities in the city.

French President Emmanuel Macron was spotted on the Bund hugging and kissing local children, before he inaugurated the Shanghai branch of the Centre Pompidou.

Thailand Deputy Prime Minister and Minister of Commerce Jurin Laksanawisit was trending on Weibo — he pleasantly surprised customers at Alibaba’s Freshippo supermarket when he toured its food corner and offered them Thai specialties. He also live-streamed his tour at the supermarket to followers in Thailand.

France and Thailand are among 15 guest of honor countries at this year’s CIIE, in addition to Cambodia, Czech Republic, Greece, India, Italy, Jamaica, Jordan, Kazakhstan, Malaysia, Peru, Russia, Uzbekistan and Zambia. Russia was guest of honor at the inaugural CIIE last year.

The trade fair, unique in its nature for importing rather than exporting, has a section with more than 60 country pavilions, while guest of honor countries were among the most innovatively designed offering charming products and activities.

Shanghai Daily checked out the Czech and Thailand pavilions and recorded exclusive interviews with people who had inside knowledge.

Products inside the Czech pavilion include an ultralight aircraft, a panda-engraved glass vase, crystal, super-lasers and a Petrof piano, the same model on which President Milos Zeman improvised a melody when he toured last year’s CIIE with Chinese President Xi Jinping.

The Czech pavilion was designed around the theme “The Country for the Future.”

It is packed with specialty products, eye-catching activities and is intriguing visiting crowds. It is intended to showcase the country’s most innovative offerings in terms of fashion, manufacturing and technology.

Radek Vondracek, president of Czech’s Chamber of Deputies, opened the national pavilion before departing with a delegation to Hangzhou and Beijing. Meetings there will be very important for Czech-China relations, he told Shanghai Daily before leaving the city.

“It’s a great opportunity,” he said, while also affirming the “open market” statement by Xi during the second CIIE inauguration speech on Tuesday.

“I’m really happy about the speech, because the Czech Republic will always support open markets. We are an exporting country, so Czech industry is very sensitive to any (market) changes. We really do need partners in this area. We are always trying to convince other countries that open markets are the only way we can go.”

Vondracek acknowledged the Chinese market is very attractive to European countries, though competition is difficult.

“But we are self-confident,” he said. “Czech products are high quality, with reasonable prices. We have a lot of examples of companies which are successful. As I heard in the speech of President Xi, your middle class is now the strongest middle class on the planet, so it’s a great opportunity for Czech companies to fight for a spot and the market.”

Czech firms are here already, and many more are coming, as seen at the pavilion.

Skoda automobiles, glass and crystal products, as well as Czech beer, have long enjoyed popularity in the Chinese market, while high-tech products like the Shark Aero are rising stars.

The two-seat tandem ultralight aircraft was designed and constructed as a fast cross-country airplane using the most advanced carbon-fiber epoxy composites and optimized aerodynamics.

It received a Validation of Type Certificate from the Civil Aviation Administration of China in summer 2017. 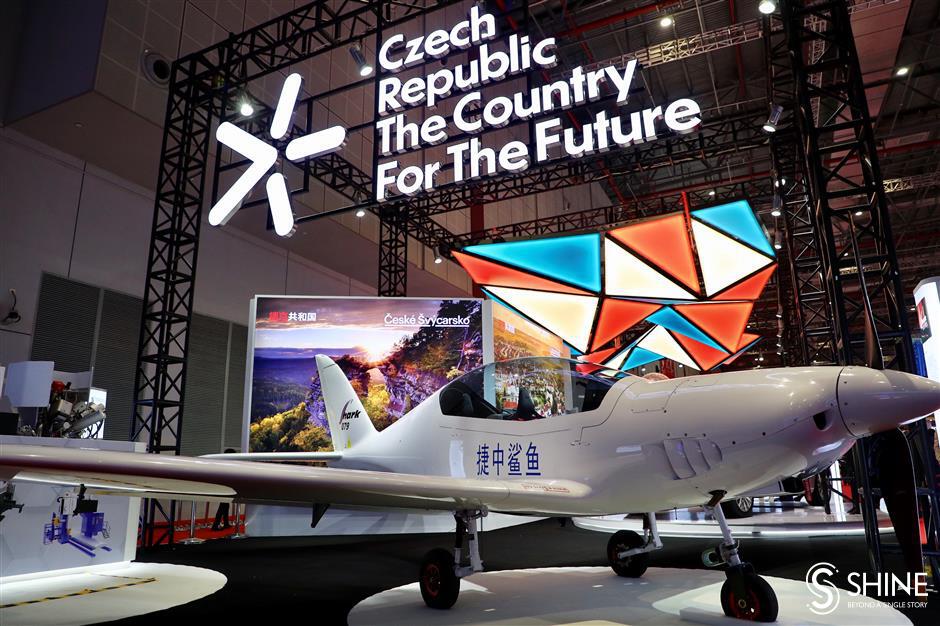 The two-seat tandem ultralight aircraft Shark Aero is a highlight at the Czech pavilion.

Most of the products showcased in Thailand’s national pavilion are no strangers to Chinese consumers, while some are among the best-selling in the market. Showcasing the country’s signature and top-quality products reflects the government’s dedication to improve the value of its products and services, according to the visiting Deputy Prime Minister Laksanawisit.

“We appreciate China’s policy to support open market and free trade,” the minister said as he toured the pavilion.

“Free trade is key to the development of countries and trade. It is also an inevitable trend. This CIIE provides a significant platform to stimulate trade between different countries, especially at a time when global economy uncertainty is on the rise. Leveraging the large Chinese market, we can work toward more bilateral and multilateral cooperation.”

China is Thailand’s largest trade partner. The bilateral trade volume has been growing more than 10 percent on average since 2009. It was around US$80 billion last year, and the two countries set a new target at US$140 billion in 2021.

“I believe that Thailand’s participation in CIIE will contribute to the expansion of trade as targeted,” Sasirit Tangulrat, consul general of Thailand in Shanghai, told Shanghai Daily.

“Thailand companies that participated in the CIIE last year were impressed by the very large scale of this import expo. They had a good opportunity to meet with a variety of traders and customers. They learned a lot about business opportunities in Shanghai, as well as its high-technology advancement and its openness that greatly supports a business environment.”

She added that 10 leading brands from Thailand lifestyle and design industries are featured in the national pavilion, supported by the promotion program “Thai 10/10 — Thai 10 Luxe Global Lifestyle Showcase.”

The national pavilion also exhibits geographical identification products in different regions of Thailand, especially Thai fruits, which have unique flavors depending on the origins.

“Having been in Shanghai for a year, I had an opportunity to interact with many Thai businessmen who are eager to enter the Chinese market as there is still vast opportunity for them,” she said.

“What I think inspires them more and more is China’s strength in e-commerce and advanced technology that would be beneficial to their business. More Thai enterprises participate in trade expos and economic fairs, organized in Shanghai, as they want to explore a better channel to enter China.” Thailand’s national pavilion displays some of the best-selling products.