Avoiding egg on your face in investing

The clichéd advice is “don’t put all your eggs in one basket” when investing, but the trick is in choosing the best baskets, and that’s not so simply stated.

Looking ahead to 2018, many investors are still basking in the glow of great returns last year. Global equities rallied more than 20 percent, and commodities and bonds also delivered good yields, according to a recent report by the wealth management arm of Standard Chartered Bank.

That’s history now. What is less clear is whether the bulls will continue their rampage in 2018 and where they may run strongest.

The British lender is particularly keen on equities on the European Union and in Asian markets outside of Japan. The wealth management team at the bank noted that Chinese equities are increasingly being driven by strong corporate profits and fair valuations.

In China, sectors backed by strong government policies, such as clean energy, e-commerce, entertainment and healthcare, are likely to perform well, the bank said.

Zhao Bing, a healthcare analyst at UBS Securities, said the pharmaceutical industry last year recorded its best performance since 2015, and he is optimistic about generic drug makers in the next three years because more than 90 percent of medication manufacturers are now making generics.

Swiss-based UBS said China’s “Belt and Road Initiative” provides investors new investment scope. Infrastructure projects along the trade route are “gaining momentum,” the bank said, predicting that relevant spending will double in the next five years to up to US$160 billion.

Sounding a cautious note, Ethan Wang, head of investment strategy at the wealth management unit of Standard Chartered Bank (China), said “Belt and Road” investments are most suited to investors with a long-term view.

For those with shorter investment timelines, UBS is keen on technology, with a focus on companies related to digital data, automation and robotics, and smart mobility.

In the commodities realm, UBS advises investors to go overweight in gold and silver as insurance against geopolitical uncertainty, higher inflation and a weaker US dollar. 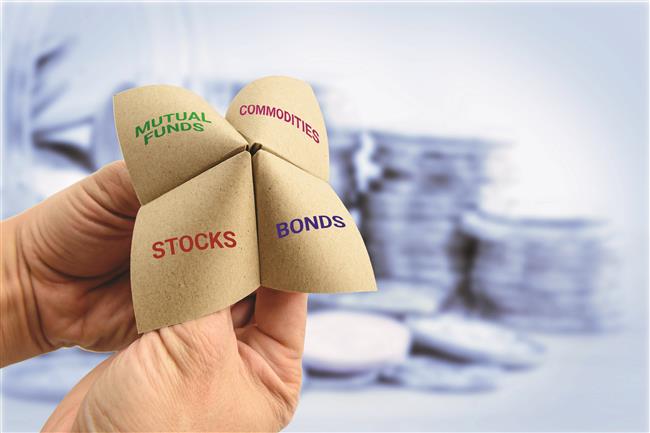 The property market, another favorite for Chinese investors, is turning its focus to rentals, Wang Tao, chief China economist at UBS, noted in a recent report.

She said she believes rental housing via large-scale operators could lift home renovation spending, and she expects cheaper housing costs to increase consumer outlays on education, healthcare and tourism.

Jack Lee, head of China equity research at Schroder Investment Management (Shanghai), said the inclusion of A-shares in the MSCI emerging markets index has given domestic and foreign investors new scope in investing in listed companies.

He said the top picks of overseas investors in A-shares this year will be blue chips, even though valuations of big-cap companies are no longer a bargain.

"The stock market’s performance this year, as measured by the broad market index CSI300, may fall short of last year’s 21 percent gain,” Lee said, adding that “opportunities still exist among Chinese companies that have restructured or are showing improved profits, such as iron and steel manufacturers."

Smaller-cap companies that dominate the Shenzhen stock market are also worth keeping an eye on, Lee told Shanghai Daily. Certain companies with solid fundamentals have seen their valuations becoming more reasonable, underpinned especially by their growth potential, he added. 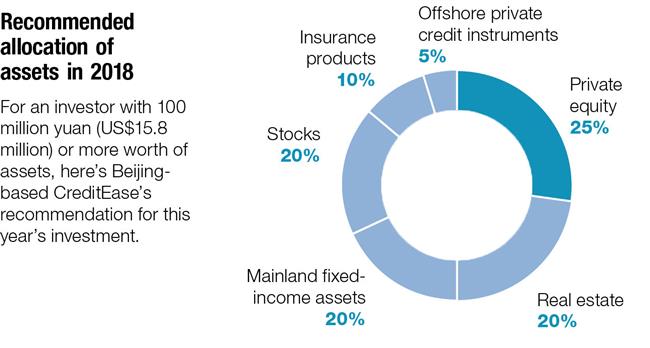 In uncertain times, investors may seek comfort in so-called “alternative assets,” such as antiques, fine wines, rare stamps and coins. These investments, which are less liquid than stocks, bond and cash, usually require longer investment horizons.

Randolph B. Cohen, a senior lecturer at the Harvard Business School and visiting lecturer at the MIT Sloan School of Management, said he believes the so-called “fund of funds” is the best channel for asset allocation.

That is an investment strategy in which a fund invests in different types of funds, with underling assets in bonds, stocks and other securities. It frees individual investors from having to make direct investments in any asset class and diminishes the risk of putting money in a single fund.

Of course, no discussion of eggs in baskets could overlook the currently popularity and controversy of digital currencies like bitcoin.

UBS Chairman Axel Weber told CNBC at the recent World Economic Forum in Davos that bitcoin is a “speculative investment” and the bank is not advising its clients to invest in it.

HSBC senior economic advisor Stephen King compared the bitcoin boom with the “tulip mania” bubble in Holland in the 1700s, which resulted in a spectacular market crash. He said people who want to invest in bitcoin should “be prepared to lose everything.”